13. Animal husbandry is the science of rearing, feeding and caring, breeding and disease control of animals. It ensures supply of proper nutrition to our growing population through activities like increased production and improvement of animal products like milk, eggs, meat, honey, etc.

a. Poultry production depends upon the photoperiod.Discuss

b. Polyculture of fishes is of great importance.

a) Poultry production depends upon the photoperiod:

1. The photoperiod stimulates the growth and breeding of birds.

2. It increases the life span of birds

3. As it increases the metabolic rate the egg laying fowls will lay more eggs.

4. The light induces the endocrine glands and increases hormone secretion.

5. The light intensity depends on its wavelengths.

b) Poly culture of fishes is of great importance:

1. In poly culture fishes will not fitht for food.

2. No deficiency of oxygen.

4. In poly culture the fishes use the maximum food to convert it into meat.

15. Write the advantages of vermicomposting.

3. Vermicompost is a rich nutrients.

4. Used as a manure for terrace gardening.

16. Name the three castes in a honey bee colony

i. The largest bee in the colony

ii. The kind of flight which the new virgin queen takes along with the drones out of the hive

1. The largest bee in the colony - Queen bee

2. The kind of flight which the new virgin queen takes along with the drones out of the hive - Nuptial flight

18. What are the main duties of a worker bee?

4. Takes care of the queen and drones.

9. Searches and gathers the pollen nectar and propolis and water.

19. What happens to the drones after mating flight?

• The drones are attracted to the pheromones of queen bee and mating taking place. The drone dies after copulation.

20. Give the economic importance of Silkworm

3. Silk is used in industries and for military purposes.

4. It is used in the manufacturing of fishing fibres, parachutes, cartridge bags insulation coils for telephone wire less receivers

5. It is used to manufacture tyres of racing cars, filter fibres, in medical dressing and as suture materials.

21. What are the Nutritive values of fishes?

2. It is a good stable food to tide over the nutritional needs of man.

4. They have histidine which is responsible for the meaty flavor of the flesh.

6. Minerals such as calcium magnesium phosphorus potassium iron manganese iodine and copper is present in fishes.

22. Give the economic importance of prawn fishery

• They are highly palatable.

• They are rich in glycogen protein with low fat content.

23. Give the economic importance of lac insect

• Lac is used as a sealing wax and adhesive for optical instruments.

• It is a good insulator.

• It is used in the preparations of shoe and leather polishes and as a protective coating of wood.

• It is used in laminating paper board photographs, plastic moulded articles.

• Used as a filling material for gold ornaments.

24. Name any two trees on which lac insect grows.

• Breeding between a superior male of one breed with a superior female of another breed. The cross breed progeny have superior traits.

26. What are the advantages of artificial insemination?

1. It increases the rate of conception.

3. Semen can be collected from injured bulls which have desirable traits.

• Multiple ovulation embryo transfer technology is a method of propagation of animals with desirable traits.

• This method is applied when the success rate of crossing is low even after insemination.

• 6-8 eggs can be produced by this technology.

• The eggs are taken from genetic mother and fertilized artificially.

• The embryo at 8 - 32 celled stage are transferred to a surrogate mother.

For another round of ovulation the same genetic mother is utilized.

• It is used in high milk yielding females and high quality meat production.

28. Mention the advantages of MOET.

• Advantage of this techonology is to produce high milk yielding females and high quality meat yielding bulls in a short time.

29. Write the peculiar characters of duck.

1. The body is fully covered with oily feathers.

2. They have a layer of fat under their skin which prevents it from getting wet.

3. They lay eggs at night orin the morning. 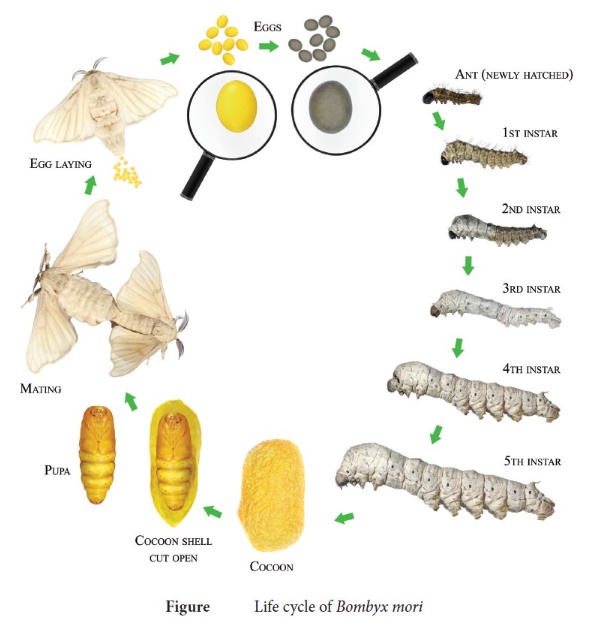 • The adult of Bombyx mori is about 2.5 cm in length and pale creamy white in colour.

• Due to heavy body and feeble wings, flight is not possible by the female moth.

• The female starts egg laying which is completed in 1-24 hours.

• A single female moth lays 400-500 eggs depending upon the climatic conditions.

The diapause type is laid by silkworms inhabiting the temperate regions.

• The eggs after ten days of incubation hatch in to larva called as caterpillar.

• The newly hatched caterpillar is about 3mm in length and is pale, yellowish - white in colour.

• The caterpillar are provided with well developed mandibulate type of mouth-parts adopted to feed easily on the mulberry leaves.

• The fully grown caterpillar is 7.5 cm in length.

• The caterpillars stop feeding and move towards the corner among the leaves and secretes a sticky fluid through their silk gland.

• The secreted fluid comes out through spinneret (a narrow pore situated on the hypopharynx) and takes the form of long fine thread of silk which hardens on exposure to air and is wrapped around the body of caterpillar in the forms of covering called as cocoon.

• The length of continuous thread secreted by a caterpillar for the formation of cocoon is about 1000-2000 metres which requires 3 days to complete.

• The pupal period lasts for 10 to 12 days and the pupae cut through the cocoon and emerge in to adult moth.

• This moth is unisexual in nature and does not feed during its very short life period of 2-3 days.

• Just after emergence, male moth copulates with female for about 2-3 hours and if not separated, they may die after few hours of copulating with Female.