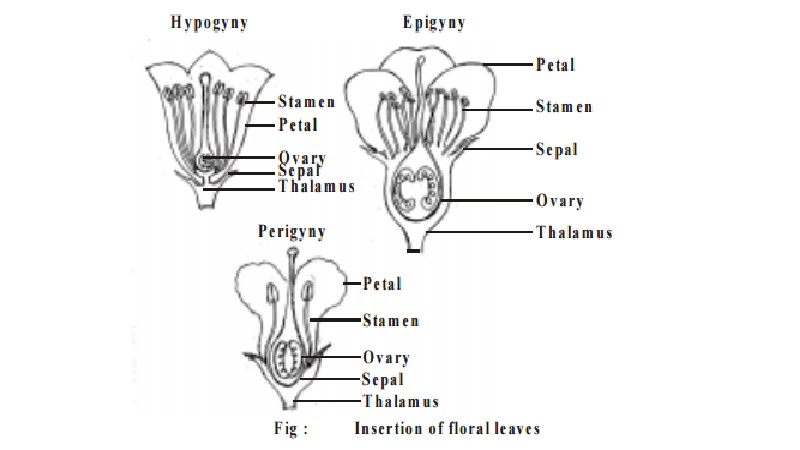 Bracts are special leaves at whose axil flowers develop. For example, in an axillary flower, the leaf from whose axil the flower develops becomes the bract. But bracts are not always present. If a bract is found, the flower is called bracteate; if it is absent then the flower is described as ebracteate. When bracts are present, they protect flower buds in the young stage. Sometimes small and thin bract-like structures are present on the pedicel between the flower and the bract. These are called bracteoles. the bracteoles may be one or two in number. Flowers having bracteoles are described as bracteolate and flowers where bracteoles are absent are calledebracteolate.

The calyx is the outermost whorl of a flower composed of sepals. The sepals are usually green in colour, but sometimes, become brightly coloured then, said to be petaloid as in Caesalpinia pulcherrima. in Musseanda frondosa the sepals are transformed into large, yellow or white and leafy structure.

The primary function of the calyx is protective. It protects the inner parts of the flower from mechanical injury, rain and excessive sun shine, and from drying out in the bud condition. Green in colour, it can also do the phosynthetic function. When petaloid, it performs the function of attracting insects for pollination. When spiny, its function is defensive and as pappus, it helps in the dispersal of fruit.

The calyx may be regular or irregular. The sepals are free from one another and is said to be ploysepalous, when united united,gamosepalous.

The corolla is the second accessory floral whorl consisting of petals.

The petals of the corolla are usually variously coloured and of delicate texture. They may be free (polypetalous) or united (gamopetalous). The primary function of the corolla is to attract insects for polinatioin and also serves to protect the essential organs.