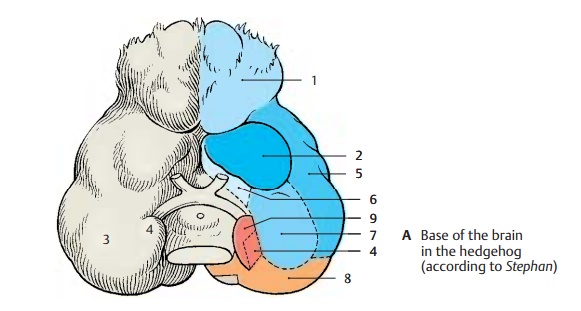 The paleocortex (blue) is the oldest cortical area of the telencephalon. Together with the olfactory bulb and the olfactory tract it forms the olfactory brain, or rhinencephalon. In primitive mammals (hedgehog) (A), this is the largest part of the telencephalon. The large, compact olfactory bulb (A1) lies ros-trally and, adjacent to it, the olfactorytubercle (A2), or olfactory cortex. The rest ofthe base of the brain is occupied by the pir-iform lobe (A3) with the uncus (A4). The pir-iform lobe contains various cortical areas, namely, laterally the prepiriform area (A5), medially the diagonal band of Broca (ban-deletta diagonalis) (A6), and caudally the periamygdalar area (A7). The caudal part ofthe piriform lobe is occupied by the entorhi-nal area (A8), a transitional area (orange)between archicortex (red) and neocortex. Medially appears a portion of the hippo-campal formation, the uncus with the su-perficial dentate gyrus (dentate band) (A9). 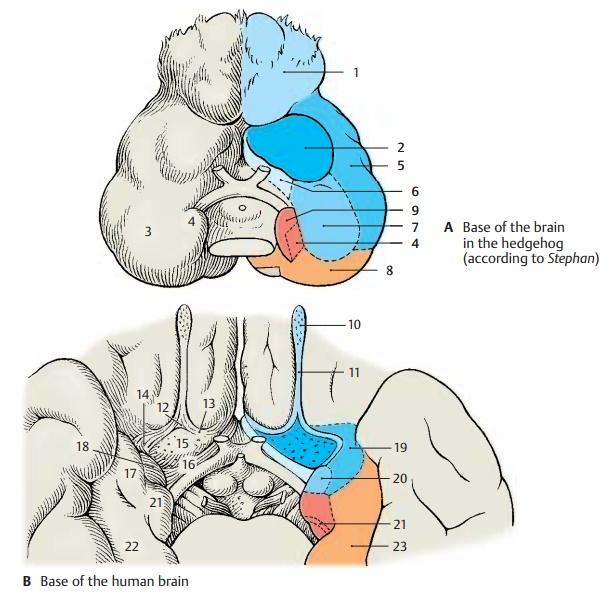 The enormous expansion of the neocortex in humans (B) has displaced the paleocortex into the depth where it represents only a small part of the base of the brain. The slender olfactory bulb (B10) is connected by the olfactory tract (B11) with the olfactory cortex. The fibers of the tract divide at theolfactory trigonum (B12) into two (but ofteninto three or more) bundles: the medial ol-factory stria (B13) and the lateral olfactory stria (B14). They enclose the olfactory tubercle which, in humans, has sunk into thedepth as anterior perforated substance (B15). It is delimited caudally by thediagonal bandof Broca (B16) which contains afferent fibersfor the olfactory bulb.

The rotation of the hemisphere in humans has displaced the other parts of the piriformlobe mainly to the medial aspect of the tem-poral lobe, where they form the ambientgyrus (B17) and the semilunar gyrus (B18).The ambient gyrus is occupied by the pre-piriform cortex (B19), and the semilunargyrus by the periamygdalar cortex (B20). Ventrocaudally to it the uncus (B21) bulges with the superficial end of the dentate gyrus known asGiacominiâ€™s band. It merges into the parahippocampal gyrus (B22) which is covered by the entorhinal cortex (B23). 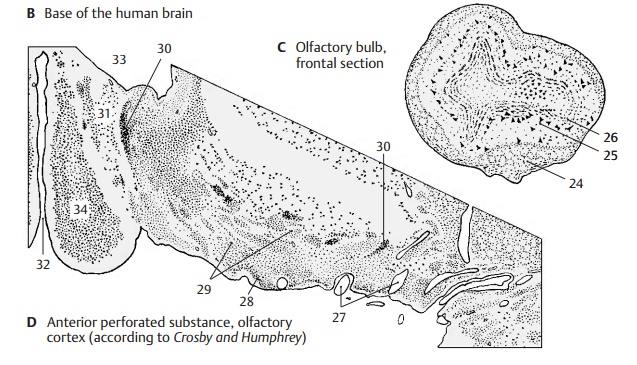 D31 Nucleus of the diagonal band.