The results of histological and electrophysi-ological studies have made it possible to de-sign models in which the described cell types are organized in a functional group.

The results of histological and electrophysi-ological studies have made it possible to de-sign models in which the described cell types are organized in a functional group. The vertical column is conceived as a mod-ule, that is, as a group of elements forming a functional unit. The efferent elements of the column are the pyramidal cells (B11). Their axons either run to other cortical columns, where their terminal ramifications end at the spines of other pyramidal cells, or they run to subcor-tical groups of neurons. The numerous axoncollaterals (A4) terminate at the pyramidal cells of nearby columns. 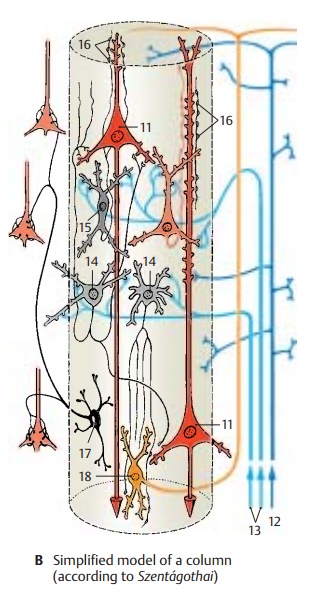 There are two kinds of afferent fibers: the association fibers from other columns and the specific sensory fibers from peripheral sensory areas. In every layer the association fibers (B12) give off branches that terminate at the spines of pyramidal cells. They ascend to the molecu-lar layer, where they branch into horizon-tally running fibers. The latter have synaptic contacts with apical dendrites within a radius of 3 mm. The excitation transmitted by them reaches far beyond the column; however, it remains weak because the num-ber of synaptic contacts is limited. The specific fibers (B13) terminate in layer IV oninterneurons (B14), primarily on the cells with two dendritic trees (B15). The axons of the latter ascend vertically along the apical dendrites of pyramidal cells and form syn-apses with their spines (B16). These series of synapses result in powerful transmission. The basket cells (B17), which are inhibitory interneurons, send their axons to the pyra-midal cells of adjacent columns and inhibit them, thereby restricting the excitation. The basket cells themselves are activated by re-current collaterals of the excitatory pyra-midal cells. The axons of Martinottiâ€™s cells (B18) ascend to the molecular layer where they form branches.

The number of neurons per column is esti-mated to be 2500, approximately 100 of which are pyramidal cells. It should be con-sidered, however, that a vertical column is not a clearly defined histological entity. Possibly, it does not represent a permanent morphological unit but rather a functional unit, which forms and disintegrates accord-ing to the level of excitation.