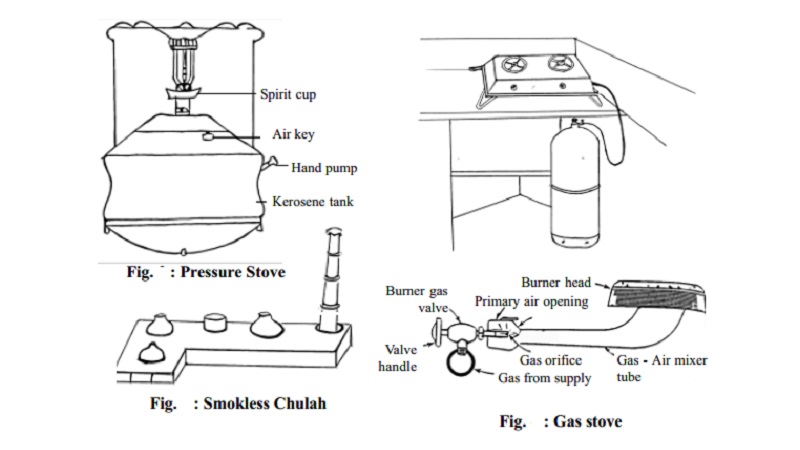 In India this is the commonest type in most parts, but rather old fashioned. It stands on three stones holding any type or size of vessel over it.

In India this is the commonest type in most parts, but rather old fashioned. It stands on three stones holding any type or size of vessel over it. The fuel burnt in this chulah is usually pieces of wood and twigs. Fire wood makes a better fuel compared to other fuels such as saw dust, waste paper, cowdung cake, husk, coconut shells and other organic waste. Proper chimneys need to be constructed to let out smoke from the kitchen.

The ordinary traditional chulah was made more efficient and economical by evolving smokeless chulah. The Hindi word 'chula' means a fire place or stove for cooking. Some of the smokeless chulahs are magan chulah, gujarat chulah, nada chulah and Dr. S.P.Raju's chulah. Red clay, cowdung and hay are used to set the platform. The pot seats are scooped out. There is a passage between the pot seats, large enough for the flame to pass. The smoke is drawn out through the chimney. Hence kitchen can be maintained smokeless. Usually there are three pot seats, at one end the fuel is fed. If any pot seat is not used, it must be covered to prevent the smoke escaping from it.

A charcoal sigri is made up of iron. The stove is not costly and has the advantage of producing less smoke. Charcoal is the charred remains of heated wood. It is black and brittle. It is easy to light and when lit it burns, intensely glowing red. It needs fanning often to ensure a uniform heating. The disadvantage of this stove is, if the room is not well ventilated there is the danger of carbon monoxide poisoning through the fumes of the unconsumed gas given out from the charcoal.

In the market, several oil stoves are available for cooking. They are economical, portable, can be easily lit, and well managed. They are available in various shapes and sizes. Oil stoves are more extensively used in places where there is scarcity of electricity and gas.

Clean kerosene oil should be used. The kerosene stove does not burn the liquid kerosene straight away but only burns the vapour of kerosene which is produced by heat. The result is a blue flame which gives out intense heat. Special care is needed to keep them clean and in good order. The odour of kerosene oil will otherwise make the food unpalatable. Their efficiency depends upon how regularly wicks are trimmed, oil is fed and the stove is maintained.

Pressure Stoves are an improvement over the wick stoves. This appliance consists of a burner top and a tank at the bottom for the kerosene. The tank is filled with pump, a lid and an air key. There is a spirit cup at the centre of the stove and a nipple on top of it. In general pressure stoves consume less of kerosene and produce a hotter flame than the wick stove.

The pressure stoves are not easy to keep clean. Pressure stoves need pricking, priming and pumping before they can be lit. It causes soot on lighting. It is too hot for simmering purposes. It needs to be pumped up from time to time.

For domestic use, liquefied petroleum gas is generally supplied in steel cylinders used in this type of stove. Cooking in gas stoves are efficient, as heat is easily regulated. It is convenient and economical in the long run. A short piece of special tubing connects the cylinder carrying the gas. When the cylinder valve is opened, the evaporated gas pass through the regulator to the stove. Gas stove saves time and energy for the home makers. Hence, labour saving. It does not produce soot on the cooking utensil, since there is no smoke. It helps to maintain the kitchen neat, tidy and clean. It is more helpful in quantity cookery in hostels and hotels. Leakage of gas should be prevented.

When a current of electricity passes through a conductor, heat is produced. Electric stoves, are heated by coils through which current passes. Appliances such as heaters, hotplates, kettles and toaster are coming into common use. The absence of smoke, smell or ash are the advantages. In India, due to the high cost of electricity, electrical equipment, scarcity of electricity and fear of accidents, it is not commonly used.

The advancement of modern science has made available many techniques for using the different potentials of energy and utilizing them for increasing fuel needs. Many cooking devices utilizing the solar energy have been developed at present. One such is solar oven that has received considerable attention. The reflector solar devices have taken many sizes, shapes and materials of construction. The solar cooker properly designed can deliver temperature as high as 450oc. In a tropical country like India, the wide use of solar ovens should be enthusised with proper results to suit urban and rural or high and low income families.

The solar cookers are used to boil rice and dhal, bake biscuits and roast groundnut. The solar heaters are used for the provision of hot water for domestic uses. Solar heated water may be sufficient for bathing, washing and cooking needs of the family.