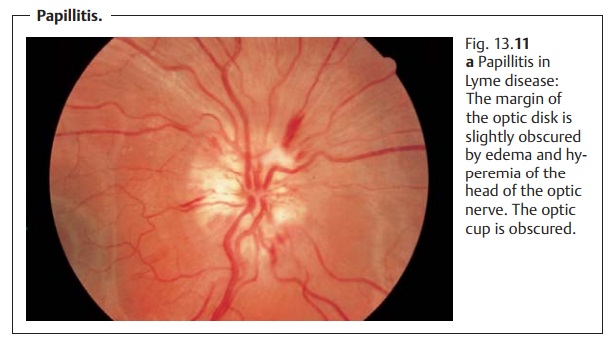 Optic neuritis is an inflammation of the optic nerve that may occur within the globe (papillitis) or posterior to it (retrobulbar optic neuritis).

Optic neuritis is an inflammation of the optic nerve that may occur within the globe (papillitis) or posterior to it (retrobulbar optic neuritis).

Optic neuritis occurs most frequently in adults between theages of 20 and 45. Women are more frequently affected than men. Twenty to forty per cent of all patients with optic neuritis develop diffuse encephalitis (multiple sclerosis).

❖ Inflammatory processes: These include infectious diseases such as Lymedisease, malaria, and syphilis, and manifestations in the optic nerve of inflammation of the orbit, paranasal sinuses, or base of the skull.

❖ Toxic damage due to agents such as methanol, lead, Myambutol (ethambu-tol hydrochloride), and chloramphenicol. In 70% of these cases, the cause isnot determined.

The cardinal symptomissudden loss of vision, which may occa-sionally be accompanied by fever (Uhthoff symptom). The field of vision is typically impaired by a central scotoma (Fig. 13.11b), paracentral scotomas, acentrocecal scotoma involving the macula and blind spot, and wedge-shaped visual field defects up to and including complete blindness. 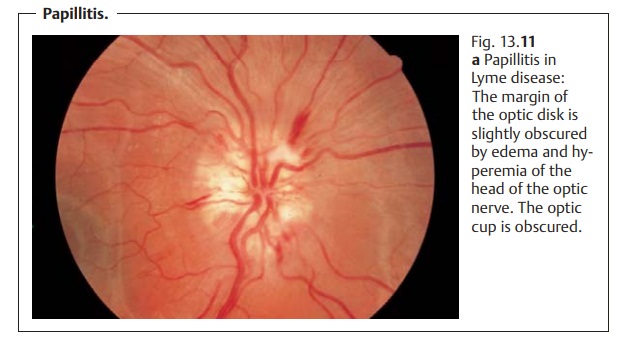 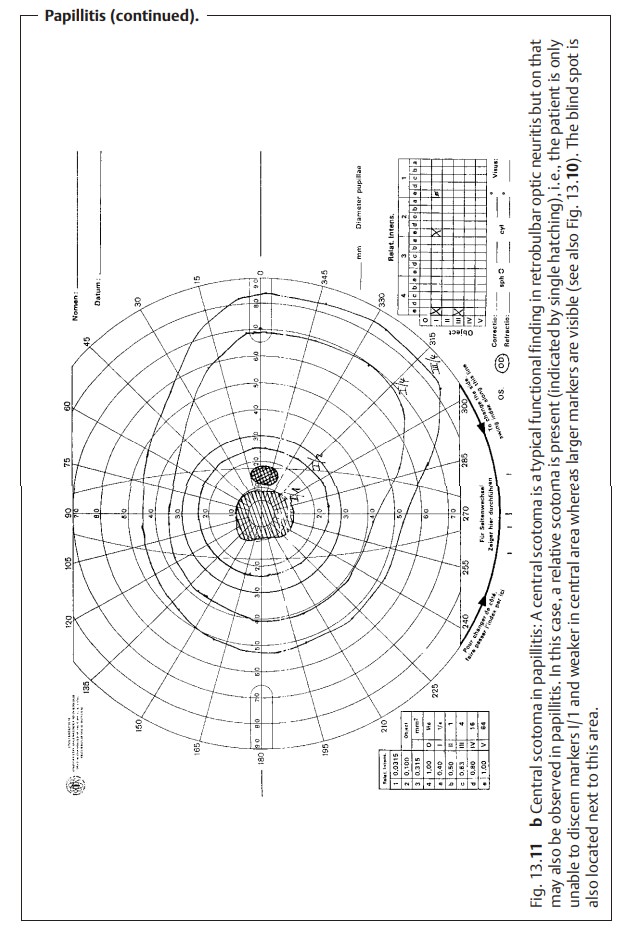 Other symptoms include pain that increases in extreme positions of gazeand when pressure is applied to the globe, and reduced perception of color intensity.

The optic disk will appear normal in retrobulbar optic neuritis.

In retrobulbar optic neuritis, the patient sees nothing (due to a central scotoma), and the physician sees nothing (the fundus appears normal).

Other findings upon examination include an afferent pupillary defect (this isregularly encountered;, red-green color vision defect, and delayed latency in the visual evoked potential.

Papilledema: Initially there is no loss of function.

Ischemic optic neuropathy: The central scotoma is lacking, and patients areusually over the age of 60.

This depends on the underlying disorder. Retrobulbar opticneuritis with severe loss of vision (less than 0.1) may be treated with high doses of steroids, i.e., 1000 mg of oral prednisolone daily for three days and 1 mg of oral prednisolone per kilogram of body weight on days four through fourteen. However, this treatment only leads to more rapid restoration of vision. Final visual acuity after one year is identical with or without high-dose steroid therapy.

This depends on the underlying disorder. Severe permanentlosses of visual acuity are possible, as are significant spontaneous improve-ments. Retrobulbar optic neuritis in diffuse encephalitis usually exhibits a strong tendency toward spontaneous improvement within four weeks without any treatment. However, discrete functional defects such as reduced visual contrast and reduced perception of color intensity will always remain. Morphologic findings always include a pale optic disk as a result of complex atrophy of the optic nerve following papillitis or partial isolated atrophy of the optic nerve following retrobulbar optic neuritis.