Congenital Disorders that Obscure the Margin of the Optic Disk 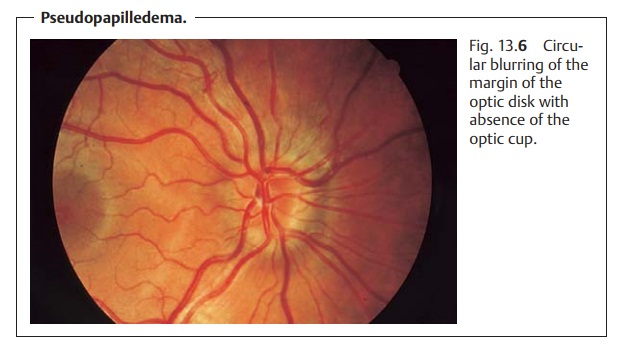 Disorders that Obscure the Margin of the Optic Disk

Congenital Disorders that Obscure the Margin of the Optic Disk

There are normal variants of the optic disk in which the margin appears fully or partially blurred. Care should be taken to distinguish them from abnormal findings.

Oblique Entry of the Optic Nerve

Where the optic nerve exits the eye in an oblique and nasal direction (Fig. 13.4), the nerve fibers on the nasal circumference will be elevated. The tightly compressed nasal nerve fibers will obscure the margin of the optic disk.Accordingly, temporal nerve fibers are stretched, and the neuroretinal rim can-not be clearly distinguished. Often an adjacent crescentic whitish area, known as a temporal crescent, will be observed on the temporal side. This crescent is frequently seen in myopia and is referred to as a myopic crescent. It can also be circular. 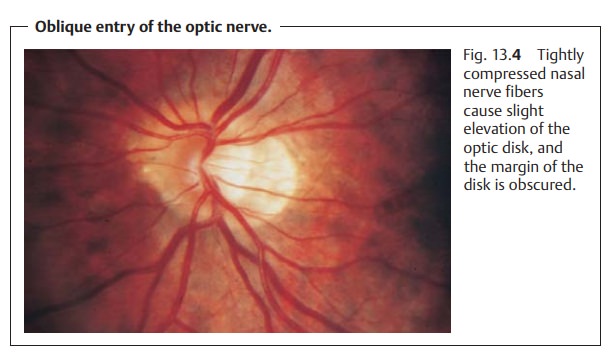 An optic nerve that exits the eye superiorly (Fig. 13.5) is referred to as a tilted disk. The superior circumference of the margin of the optic disk will be obscured in a manner similar to oblique entry of the optic nerve. A number of other changes may also be observed, including an inferior crescent, situs inversus of the retinal vessels, ectasia of the fundus, myopia, and visual field defects. These findings may occur in various combinations and are referred to collec-tively as tilted-disk syndrome. This is clinically highly significant as nasal inferior ectasia of the fundus can produce temporal superior visual field defects. Where these findings are bilateral, care should be taken to distin-guish them from pituitary tumors. This clinical picture is regarded as a form of rudimentary coloboma. 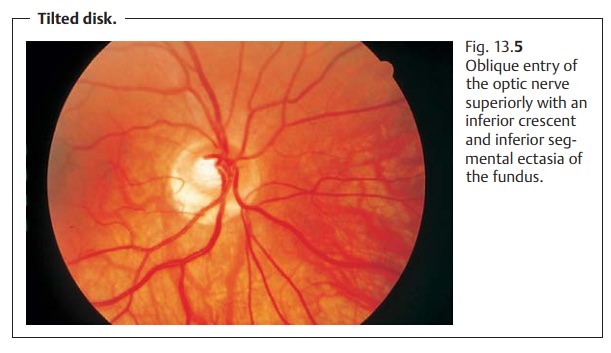 Pseudopapilledema (Fig. 13.6) is due to a narrow scleral canal. Because of the constriction, the nerve fibers are tightly compressed. The optic disk is ele-vated and the full circle of the margin obscured. The optic cup is absent, andthe retinal vessels appear tortuous. There are no abnormal morphologic changes such as bleeding, nerve fiber edema, and hyperemia; visual acuity and visual field are normal. Pseudopapilledema can occur with hyperopia, although it is encountered equally frequently in emmetropic or slightly myopic eyes. 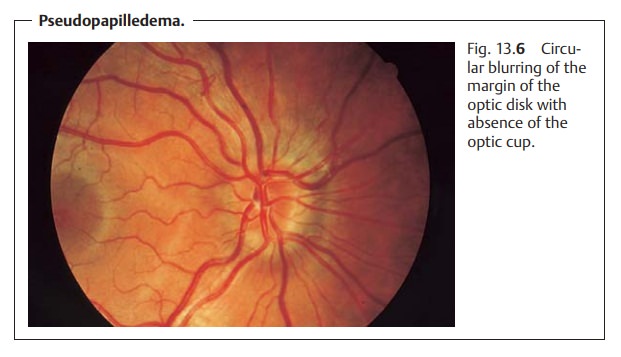 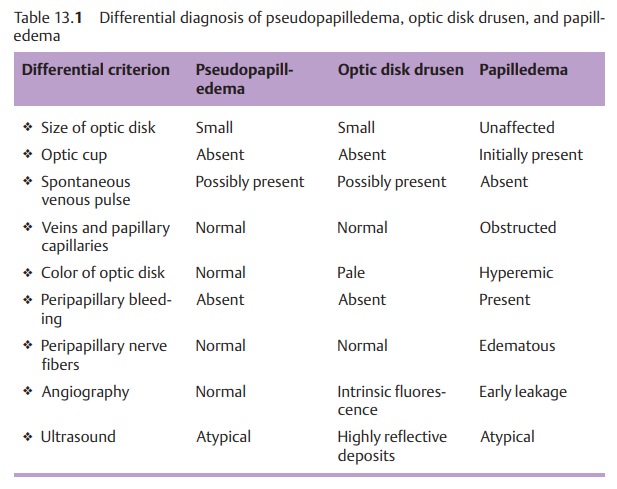 Normally retinal nerve fibers are not myelinated. However, myelinated areas occasionally occur in the retina (Fig. 13.7). They occur most frequently at the margin of the optic disk. 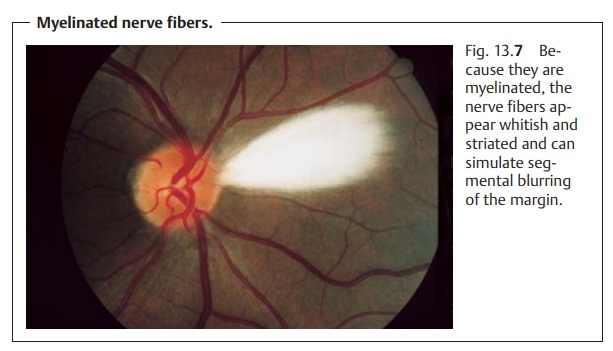 Whitish and striated, they simulate segmental orcircular blurring of the margin. Myelinated nerve fibers can also occur on theperiphery of the retina. Because of their location in the innermost layer of theretina, they tend to obscure the retinal vessels. Myelinated nerve fibers nor-mally cause no loss of function. Only extensive findings can lead to small sco-tomas.

The fetal hyaloid artery emerges from the optic disk to supply the vitreous body and lens. Glial and fibrous tissue may persist if the structure is not fully absorbed. This vestigial tissue, usually on the nasal side of the optic disk, is known as Bergmeister’s papilla. When this tissue takes the form of veil-like membrane overlying the surface of the optic disk, it is also referred to as an epipapillary membrane (Fig. 13.8). Usually this condition isasymptomatic. 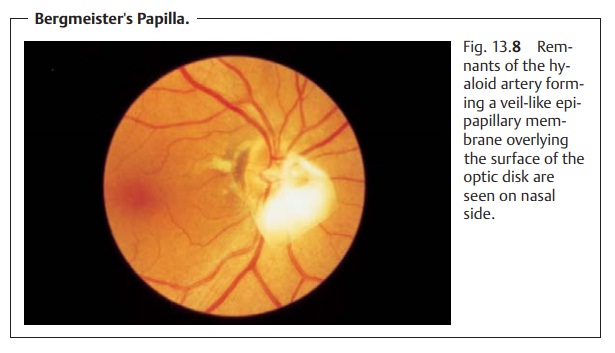 Drusen are yellowish lobular bodies in the tissue of the optic disk that areusually bilateral (in 70% of all cases). Ophthalmoscopy can reveal superficialdrusen but not drusen located deep in the scleral canal. In the presence of optic disk drusen, the disk appears slightly elevated with blurred margins andwithout an optic cup (Fig. 13.9). Abnormal morphologic signs such as hyper-emia and nerve fiber edema will not be present. However, bleeding in lines along the disk margin or subretinal peripapillary bleeding may occur in rare cases. 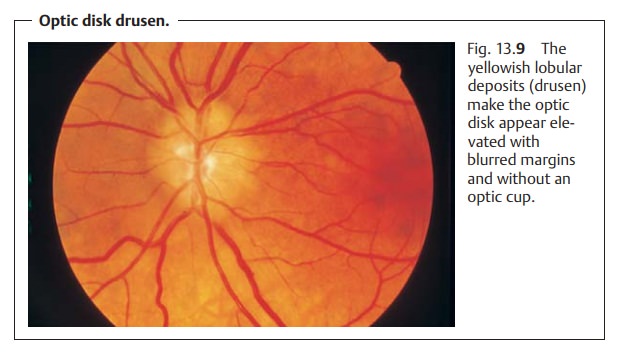 A small lamina cribrosa appears to be a factor in the etiology of the dis-order. This impedes axonal plasma flow, which predisposes the patient to axonal degeneration. This in turn produces calcifications exterior to the axons (drusen). Retinal drusen are hyaline deposits in Bruch’s membrane and are a completely unrelated process.

Drusen usually do not cause any loss of function. Deep drusen can cause compressive atrophy of nerve fibers with resulting subsequent visual field defects.

Optic disk drusen may be diagnosed on the basis of characteristic ultra-sound findings of highly reflective papillary deposits. Fluorescein angiogra-phy findings of autofluorescence prior to dye injection are also characteristic.