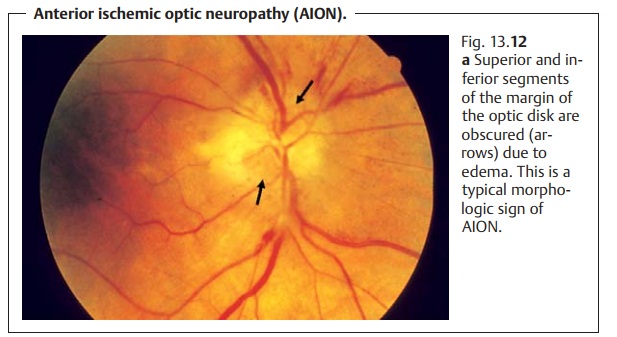 The following forms of anterior ischemic optic neuropathy (AION) are distin-guished according to the cause of the disorder:

An acute disruption of the blood supply to the optic disk, i.e., optic disk infarc-tion, resulting from vascular changes in arteriosclerosis.

Arteriosclerotic AION is a common cause of sudden loss ofvisual acuity. The greatest incidence of this disorder is between the ages of 60 and 70. In contrast to arteritic AION, it can also occur in adults below the age of 60.

The causes of the disorder lie in acute disruption of the blood flowthrough the lateral branches of the short posterior ciliary arteries and the ring of Zinn in the setting of severe arteriosclerosis. A narrow scleral canal, i.e., a small optic disk, is a predisposing factor. The disorder known as diabeticpapillopathy also belongs to this group of disorders, although it has a betterprognosis in terms of vision.

Patients report asudden unilateral loss of visual acuity. This is dueto segmental or complete infarction of the anterior portion of the optic nerve. Severity is variable. The patient may present with wedge-shaped visual field defects (Fig. 13.12b) or horizontal visual field defects that correlate with seg-mental nerve fiber edemas. However, severe concentric defects progressing to total blindness can also occur. Vision may or not be impaired. An afferent pupillary defect is always present. 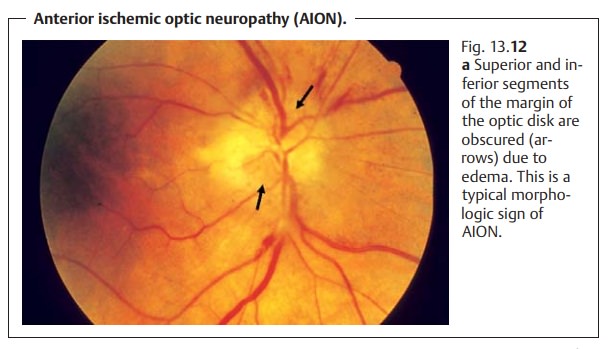 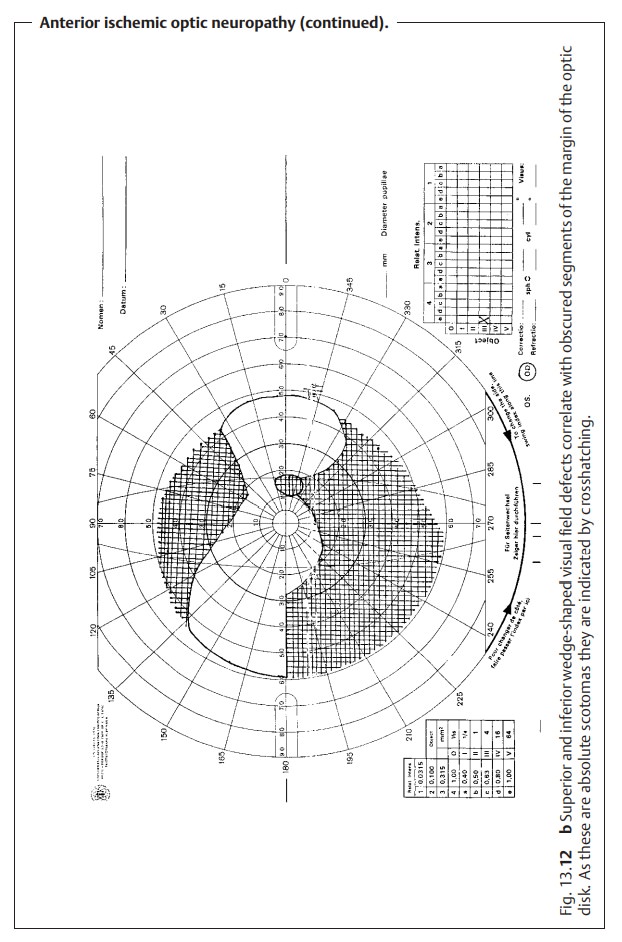 The patient will frequently have a history ofhypertension, diabetes mellitus, or hyperlipidemia.

Ophthalmoscopy will reveal edema of the optic disk, whose margin willbe accordingly obscured. The margin is often obscured in a segmental pat-tern, which is an important criterion in differential diagnosis (Fig. 13.12a). The head of the optic nerve is also hyperemic with marginal bleeding.

Obscured segments of the margin of the optic disk that correlate with visual field defects are a sign of AION.

Anterior ischemic optic neuropathy is nearly impossible to treat.Attempted methods include hemodilution (pentoxifylline infusions, acetyl-salicylic acid, and bloodletting depending on hematocrit levels) and systemic administration of steroids to control the edema. Diagnosis of the underlying cause is important; examination by an internist and Doppler ultrasound stud-ies of the carotid artery may be helpful. Underlying disorders such as diabetes mellitus or arterial hypertension should be treated.

The annual incidence is approximately three cases per100000. The disorder occurs almost exclusively after the age of 60. Women are affected slightly more often than men, accounting for 55% of all cases. Fifty per cent of all patients suffer from ocular involvement within a few days up to approximately three months of the onset of the disorder.

Giant cell arteritis is a frequently bilateral granulomatous vasculitisthat primarily affects the medium-sized and small arteries. Common sites include the temporal arteries, ophthalmic artery, short posterior ciliary arter-ies, central retinal artery, and the proximal portion of the vertebral arteries, which may be affected in varying combinations.

Patients reportsudden unilateral blindness or severe visualimpairment. Other symptoms include headaches, painful scalp in the regionof the temporal arteries, tenderness to palpation in the region of the temporal arteries, pain while chewing (a characteristic sign), weight loss, reduced general health and exercise tolerance. Patients may have a history of amauro-sis fugax or polymyalgia rheumatica.

The ophthalmoscopic findings are the same asin arteriosclerotic AION (see Fig. 13.12a). Other findings include a signifi-cantly increased erythrocyte sedimentation rate (precipitous sedimentation is the most important hematologic finding), an increased level of C-reactive protein, leukocytosis, and iron-deficiency anemia.

Erythrocyte sedimentation rate should be measured in every patient presenting with anterior ischemic optic neuropathy.

The temporal arteries are prominent (Fig. 13.13), painful to palpation, and have no pulse. The diagnosis is confirmed by a biopsy of the temporal artery. Because of the segmental pattern of vascular involvement, negative histologic findings cannot exclude giant cell arteritis. 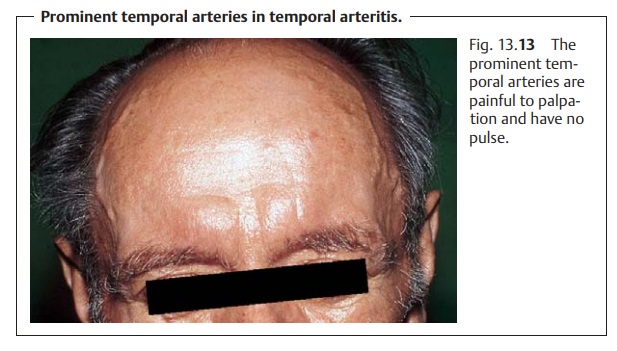 Giant cell arteritis should be considered in every patient presenting with anterior ischemic optic neuropathy.

Arteriosclerotic AION should be considered.

Immediatehigh-dosage systemic steroid therapy (initial doses upto 1000 mg of intravenous prednisone) is indicated. Steroids are reduced as the erythrocyte sedimentation rate decreases, C-reactive protein levels drop, and clinical symptoms abate. However, a maintenance dose will be required for several months. Vascular treatment such as pentoxifylline infusions may be attempted.

High-dosage systemic steroid therapy (for example 250 mg of intravenous prednisone) is indicated to protect the fellow eye even if a giant cell arteritis is only suspected.

The prognosis for the affected eye ispooreven where therapy isinitiated early. Immediate steroid therapy is absolutely indicated because in approximately 75% of all cases the fellow eye is affected within a few hours and cerebral arteries may also be at risk.