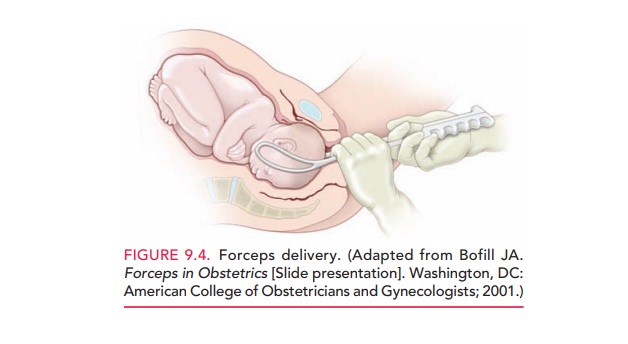 Operative vaginal deliveries are accomplished by apply-ing direct traction on the fetal skull with forceps, or by applying traction to the fetal scalp by means of a vacuum extractor.

For both forceps and vacuum extraction deliveries, the type of delivery depends on the fetal station—the relationship between the leading portion of the fetal head and the level of the maternal ischial spines. Outlet operative vaginaldelivery is the application of forceps or vacuum under thefollowing conditions:

·     The scalp is visible at the introitus without separating labia.

·     The sagittal suture is in anteroposterior diameter or right or left occiput anterior or posterior position.

Midpelvis operative vaginal delivery is the applicationof forceps or vacuum when the fetal head is engaged but the leading point of the skull is above station +2. Under very unusual circumstances, such as the sudden onset of severe fetal or maternal compromise, application of for-ceps or vacuum above station +2 may be attempted while simultaneously initiating preparation for a cesarean de-livery in the event that the operative vaginal delivery is unsuccessful.

No indication for operative vaginal delivery is absolute. The following indications apply when the fetal head is engaged and the cervix is fully dilated:

·  Shortening of the second stage for maternal benefit

In certain situations, operative vaginal delivery should be avoided or, at the least, carefully considered in terms of rel-ative maternal and fetal risks. Most authorities consider vac-uum extraction inappropriate in pregnancies before 34 weeks of gestation because of the risk of fetal intraventricular hemorrhage. Operative delivery also is contraindicated if alive fetus is known to have a bone demineralization condition (e.g., osteogenesis imperfecta) or has a bleeding disorder (e.g., allo-immune thrombocytopenia, hemophilia, or von Willebrand dis-ease), and if the fetal head is unengaged or the position of the fetal head is unknown

Forceps are primarily used to apply traction to the fetalhead to augment the expulsive forces, when the mother’s voluntary efforts in conjunction with uterine contractions are insufficient to deliver the infant (Fig. 9.4). Occasionally, forceps are used to rotate the fetal head before applying traction to complete vaginal delivery. Forceps also may be used to control delivery of the fetal head, thereby avoiding precipitous delivery. Different types of forceps are available for the different degrees of molding of the fetal head. 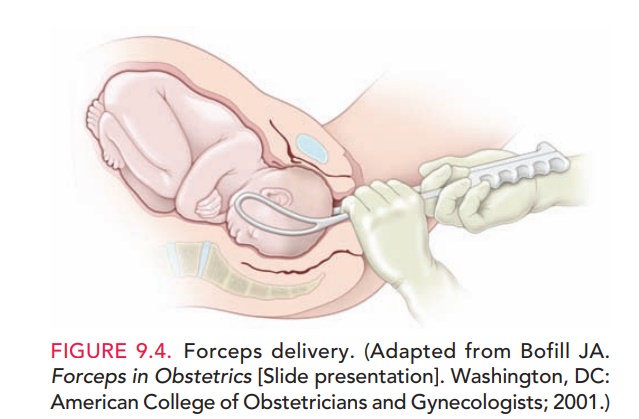 Maternal complications of forceps delivery include per-ineal trauma, hematoma, and pelvic floor injury. Neonatal risks include injuries to the brain and spine, musculoskeletal injury, and corneal abrasion if the forceps are mistakenly ap-plied over the neonate’s eyes. The risk of shoulder dysto-cia, in which the fetus’s anterior shoulder becomes lodgedagainst the pubic symphysis, is increased in forceps deliver-ies of infants weighing over 4000 g.

In vacuum extraction, a soft vacuum cup is applied to the fetal head and suction is exerted by means of a mechanical pump (Fig. 9.5). Vacuum extraction is associated with less maternal trauma than are forceps, but carries significant neonatal risks. Although the amount of traction applied to the fetal skull is less than that applied with forceps, it is still substantial and can cause serious fetal injury. Neonatal risks include intracranial hemorrhage, subgaleal hematomas, scalp lacerations (if torsion is excessive), hyperbiliru-binemia, and retinal hemorrhage. In addition, separation of the scalp from the underlying structures can lead to cephalohematoma. Overall, the incidence of serious complica-tions with vacuum extraction is approximately 5%. It is rec-ommended that rocking movements or torque not be applied to the device and that only steady traction in the line of the birth canal should be used.

Clinicians caring for the neonate should also be alerted that an operative deliv-ery has been used so that they can monitor the neonate for signs and symptoms of injury. 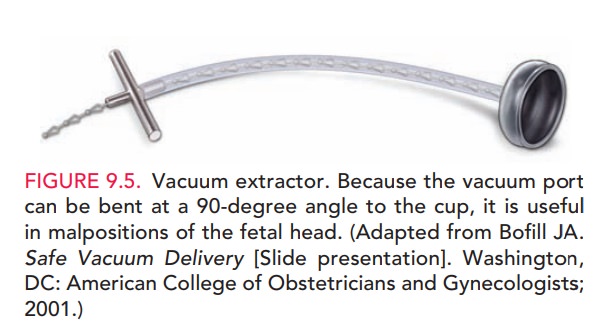