The uteroplacental unit provides oxygen and nutrients to the fetus while receiving carbon dioxide and wastes, the products of the normal aerobic fetal metabolism.

The uteroplacental unit provides oxygen and nutrients to the fetus while receiving carbon dioxide and wastes, the products of the normal aerobic fetal metabolism. Uteroplacental insufficiency occurs when the utero-placental unit is compromised. Initial fetal responses include fetal hypoxia (decreased blood oxygen levels); shunting of blood flow to the fetal brain, heart, and adrenal glands; and transient, repetitive, late decelerations of the FHR. If hypoxia continues, the fetus will eventually switch over to anaerobic glycolysis and develop meta-bolic acidosis. Lactic acid accumulates and progressive damage to vital organs occurs, especially the fetal brain and myocardium. If intervention is not timely, serious and possibly permanent damage and sometimes death can result.

Approximately 70% of cases of neonatal encephalopathy are caused by factors that were present before the onset of labor.

It is estimated that the incidence of neonatal encephalop-athy caused by intrapartum hypoxia is approximately 1.6/10,000, absent other coincident preconceptual or an-tepartum abnormalities. HIE is thus one item in the larger category of encephalopathies which may result from con-ditions such as prenatal stroke, prenatal infection, genetic abnormalities, and neonatal cerebral malformation. The criteria sufficient to suggest that an encephalopathy is as-sociated with an acute intrapartum event are presented in Box 9.1.

Cerebral palsy is a chronic disability of the centralnervous system (CNS) characterized by aberrant control of movement and posture appearing early in life and not as a result of progressive neurologic disease. Only one type of cerebral palsy, spastic quadriplegia, is associated with antepartum or intrapartum interruption of the fetal blood supply. Disorders not associated with intrapartum or peripartum asphyxia include dyskinetic or ataxic cere-bral palsy (which commonly has a genetic origin) and epilepsy, mental retardation, or attention-deficit hyper-activity disorders. 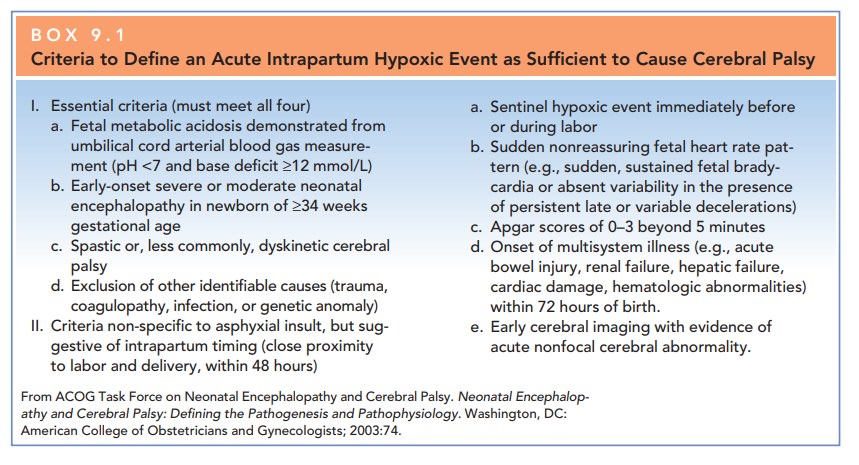