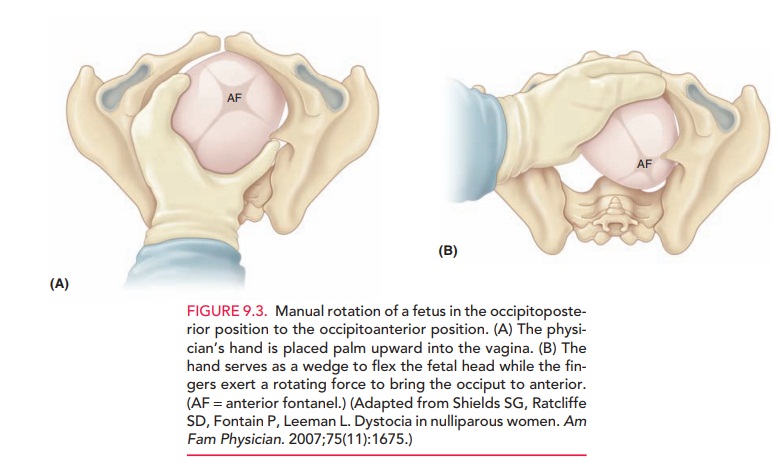 Graphic documentation of progressive cervical dilation and effacement facilitates assessing a patient’s progress in labor and identifying abnormal labor patterns. The Friedman Curve is commonly used for this purpose. Labor abnormalities can be categorized into two general types: protraction disorders, in which labor is slow to progress, and arrest disorders, in which labor ceases to progress (Table 9.1). Protraction can occur dur-ing both the latent and active phases of labor, while arrest is recognized only in the active phase. Although the defi-nition of the latent phase of labor is controversial, in gen-eral it can be defined as the phase in which the cervix effaces but undergoes minimal dilation. 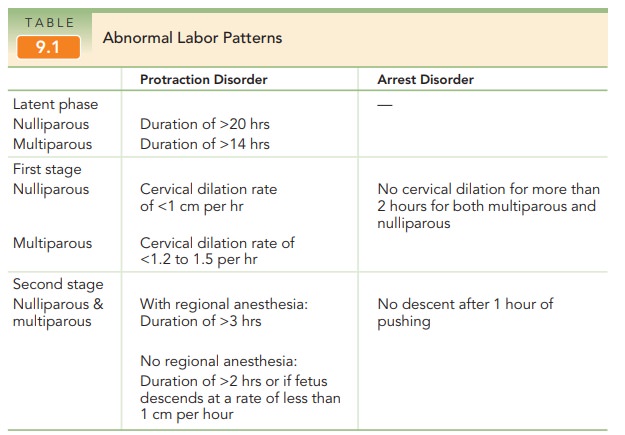 Management of abnormal labor encompasses a wide range of options, from observation to operative or cesarean delivery. Management choice depends on several factors:

·              Other clinical conditions, such as nonreassuring fetal status or chorioamnionitis

Management decisions should be balanced between ensur-ing a positive outcome for mother and fetus and avoiding the concomitant risks of operative and cesarean delivery.

Once the patient is in active labor, the first stage is consid-ered prolonged when the cervix dilates less than 1 cm per hour in nulliparous women, and less than 1.2 to 1.5 cm per hour in multi-parous women. Management options for a prolonged firststage include observation, augmentation by amniotomy or oxytocin, and continuous support. Cesarean delivery usu-ally is warranted if maternal or fetal status becomes non-reassuring.

If the membranes have not ruptured, amniotomy may en-hance progress in the active phase and negate the need for oxytocin augmentation. Amniotomy allows the fetal head, rather thanthe otherwise intact amniotic sac, to be the dilating force. It may also stimulate the release of prostaglandins, which could aid in augmenting the force of contractions.

Amniotomy is usually performed with a thin, plastic rod with a sharp hook on the end. The end is guided to the open cervical os with the examiner’s fingers, and the hook is used to snag and disrupt the amniotic sac. Risks of amniotomy include fetal heart rate decelerations due to cord compression and an increased incidence of chorioamnionitis. For these reasons, amniotomy should not be routine and should be used for women with pro-longed labor. The fetal heart rate (FHR) should be eval-uated both before and immediately after rupture of the membranes.

It has been shown that amniotomy combined with oxytocin administration early in the active stage reduces labor by up to 2 hours, although there is no change in the rate of cesarean delivery with this treatment protocol.

The goal of oxytocin administration is to effect uterine ac-tivity sufficient to produce cervical change and fetal de-scent while avoiding uterine hyperstimulation and fetal compromise. Typically, a goal of a maximum of 5 contrac-tions in a 10-minute period with resultant cervical dilation is considered adequate. Oxytocin may be administered in low-dose or high-dose regimens. Low-dose regimens are associated with a decreased incidence and severity of uterine hyperstimulation. High-dose regimens are associated with decreased labor times, incidence of chorioamnionitis, and cesarean delivery for dystocia.

Continuous Labor Support Continuous support duringlabor from caregivers (nurses, midwives, or lay individuals) may have a number of benefits for women and their new-borns. Continuous care has been associated with reduced need for pain relief and oxytocin administration, lower rates of cesarean and operative deliveries, decreased incidence of 5-minute Apgar scores lower than 7, and increased patient satisfaction with the labor experience. However, there are insufficient data comparing differences in benefits on the basis of level of training of support personnel—that is, whether the caregivers were nurses, midwives, or doulas. There is no evidence of harmful effects from continuous support during labor.

A second-stage protraction disorder should be considered when the second stage exceeds 3 hours if regional anesthesia has been ad-ministered, or 2 hours if no regional anesthesia is used, or if the fetus descends at a rate of less than 1 cm per hour if no regional anesthesia is used. Second-stage arrest is diagnosed when there is no descent after 1 hour of pushing. In the past, the fetus wasthought to be at increased risk for morbidity and mortality when the second stage exceeded 2 hours. Currently, more intensive intrapartum surveillance provides the ability to identify the fetus that may not be tolerating labor well.

Thus, the length of the second stage of labor is not in itself an absolute or even a strong indication for operative or cesarean delivery.

As long as heart tones continue to be reassuring and cephalopelvic disproportion has been ruled out, it is con-sidered safe to allow the second stage to continue. If uterine contractions are inadequate, oxytocin adminis-tration can be initiated or the dosage increased if already in place.

Bearing down efforts by the patient in conjunction with uterine contractions help bring about delivery. Labor positions other than the dorsal lithotomy position (e.g., knee-chest, sitting, squatting, or birth-chair) may bring about subtle changes in fetal presentation and facilitate vaginal delivery. Fetal accommodation may also be facili-tated by allowing the effects of epidural analgesia to dissi-pate. The absence of epidural analgesia may increase the tone of the pelvic floor muscles, facilitating the cardinal movements of labor and restoring the urge to push. In some cases of fetal malpresentation, manual techniques can facilitate delivery. If the fetus is in the occipitoposte-rior position and does not spontaneously convert to the nor-mal position, rotation can be performed to turn the fetus to the anterior position (Fig. 9.3). 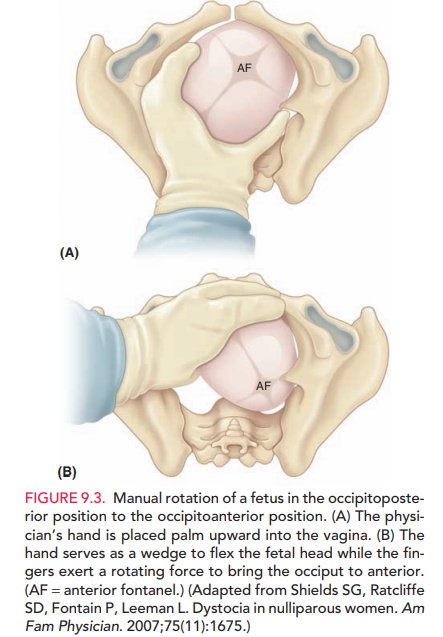 The decision to perform an operative delivery in the second stage versus continued observation should be made on the basis of clinical assessment of the woman and the fetus and the skill and training of the obstetrician. Nonreassuring status of the fetus or mother is an indica-tion for operative or cesarean delivery.