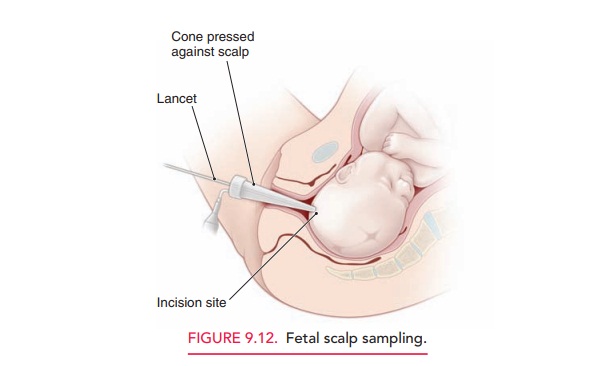 Because the rate of false-positive diagnosis of EFM is high, attempts have been made to find ancillary tests that help confirm a nonreassuring FHR tracing.

Because the rate of false-positive diagnosis of EFM is high, attempts have been made to find ancillary tests that help confirm a nonreassuring FHR tracing.

In the case of an EFM tracing with decreased or absent variability without spontaneous accelerations, an effort should be made to elicit one. Four techniques are avail-able to stimulate the fetus: 1) fetal scalp sampling,

Each of these tests is a reliable method to exclude aci-dosis if accelerations are noted after stimulation. Because vibroacoustic stimulation and scalp stimulation are less in-vasive than the other two methods, they are the preferred methods. When there is an acceleration following stimu-lation, acidosis is unlikely and labor can continue.

When a nonreassuring FHR tracing persists without spon-taneous or stimulated accelerations, a scalp blood sample for the determination of pH or lactate can be considered (Fig. 9.12). However, the use of scalp pH has decreased, and it may not be available at some tertiary hospitals. Furthermore, the positive predictive value of a low scalp pH to identify a newborn with HIE is only 3%. 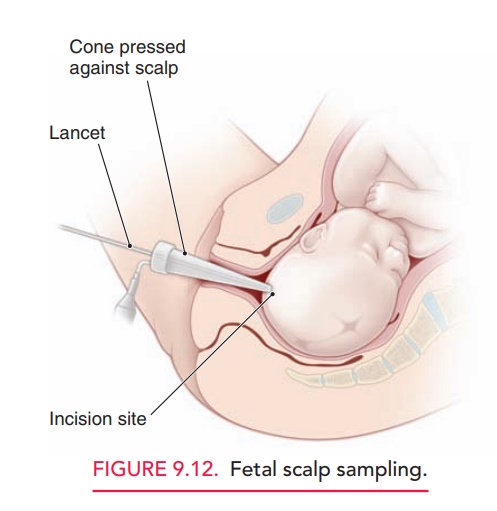 The use of pulse oximetry has been suggested as a modality to reduce the false-positive diagnosis of a non-reassuring FHR.