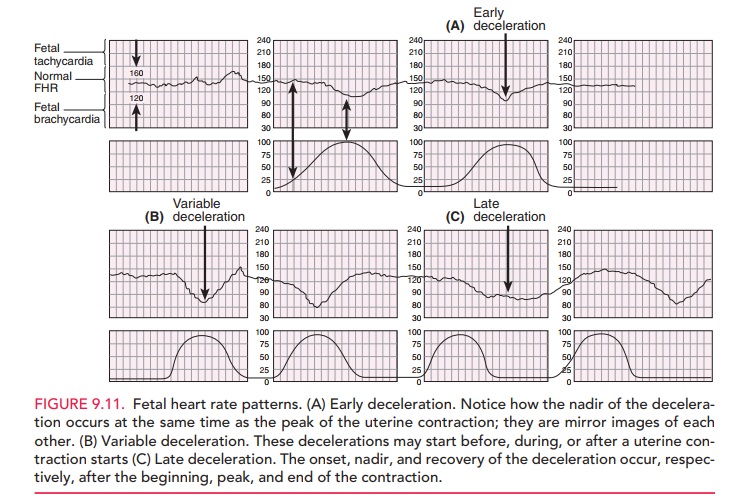 Fetal heart rate (FHR) monitoring is a modality in-tended to determine if a fetus is well-oxygenated.

Fetal heart rate (FHR) monitoring is a modality in-tended to determine if a fetus is well-oxygenated. The ma-jority of neonates (approximately 85%) born in the United States are assessed with electronic fetal monitoring(EFM), making it the most common obstetric procedure. Intermittent auscultation of the FHR after a contractionalso is used to assess intrapartum fetal well-being. Beginning in the 1980s, EFM became more common; rates of its use have doubled over the past 35 years.

EFM may be performed externally or internally. Most external monitors use a Doppler device with computerized logic to interpret and count the Doppler signals. Internal FHR monitoring is accomplished with a fetal electrode, which is a spiral wire placed directly on the fetal scalp or other presenting part.

Fetal heart rates by EFM are described in terms of base-line rate, variability, presence of accelerations, periodic or episodic decelerations, and the changes in these character-istics over time (Table 9.2) and classified by a three-tier fetal heart rate interpretation system (Box 9.2). The goal of FHRmonitoring is to detect signs of fetal jeopardy in time to intervene before irreversible damage occurs. Despite the liberal use ofcontinuous EFM in both high-risk and low-risk patients, there has been no consistent decrease in the frequency of cerebral palsy in the last two decades. Fetuses who are se-verely asphyxiated during the intrapartum period will have abnormal heart rate patterns. 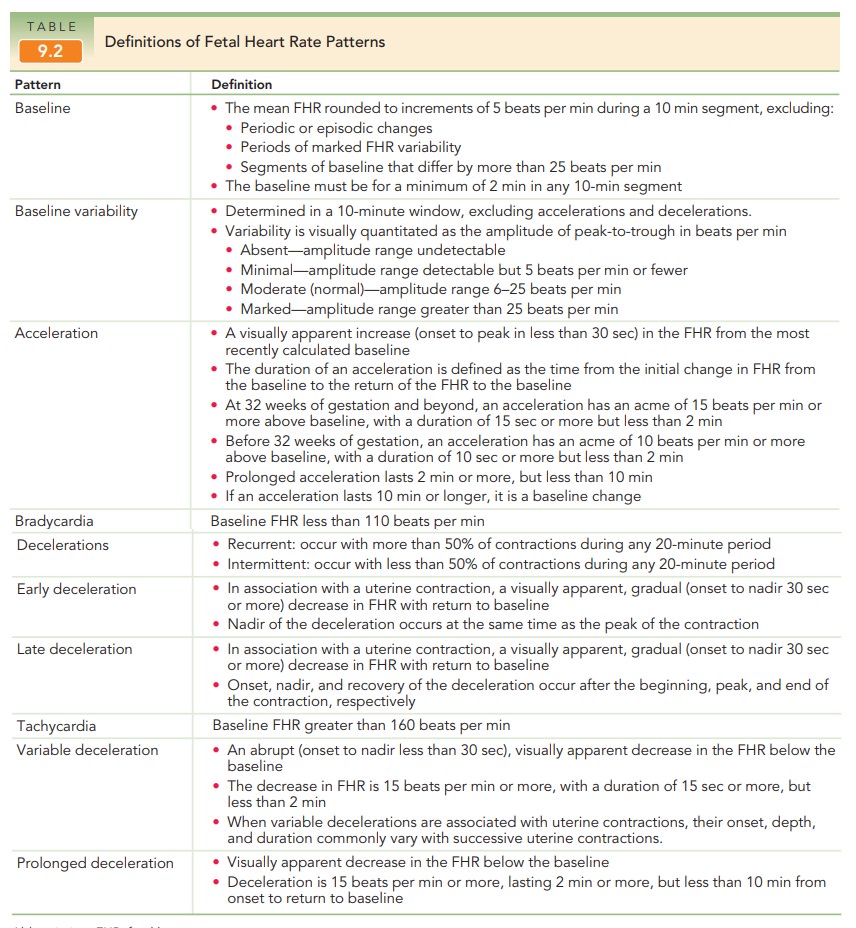 However, most patients with nonreassuring FHR patterns give birth to healthy infants. In addition, the false-positive rate of EFM for predicting adverse outcomes is high 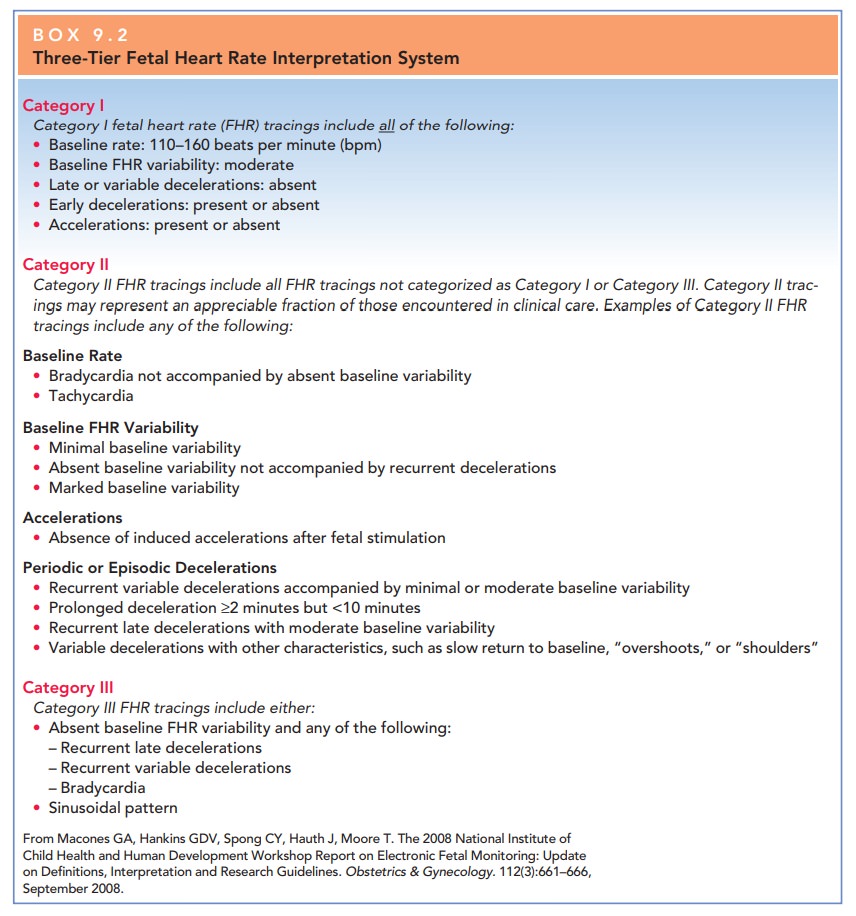 The normal baseline FHR is 120–160 beats per minute (bpm). An FHR less than 120 beats per minute is considered bradycardia. Fetal bradycardia between 100 and 120 beatsper minute usually can be tolerated for long periods when it is accompanied by normal FHR variability. An FHR be-tween 80–100 bpm is nonreassuring. An FHR that persists below 80 is an ominous sign and may presage fetal death.

Fetal heart rate variability refers to the fluctuations in theFHR of two cycles or more, visually quantified as the am-plitude of peak to trough in beats per minute. FHR is gradedaccording to amplitude range (see Table 9.3; Fig 9.10).

Moderate variability is an assuring sign that reflects ade-quate fetal oxygenation and normal brain function. In the presence of normal FHR variability, regardless of what other FHR patterns exist, the fetus is not experiencing cerebral tissue asphyxia. 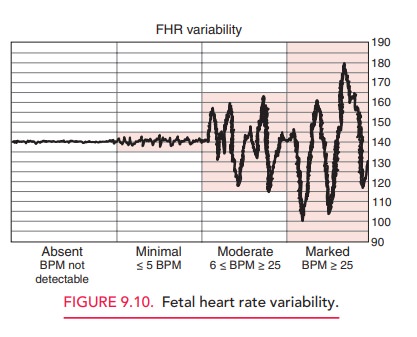 The FHR may vary with uterine contractions by slowing or accelerating in periodic patterns. These periodic FHRchanges are classified as accelerations or decelerations,based on whether they are increases or decreases in the FHR and on their magnitude (in beats per minute).

Accelerations Accelerationsof the FHR are visually appar-ent increases (onset to peak in less than 30 seconds) in the FHR from the most recently calculated baseline Accelerations aregenerally associated with reassuring fetal status and an ab-sence of hypoxia and acidemia. Stimulation of the fetal scalp by digital examination usually causes heart rate ac-celeration in the normal fetus with an arterial fetal pH of >7.20 if delivery were to occur at the time of measure-ment. For this reason, fetal scalp stimulation is sometime used as a test of fetal well-being. External vibration stim-ulation, also termed vibroacoustic stimulation, elicits the same response and is also used for this purpose (see “Ancillary Tests,” below). 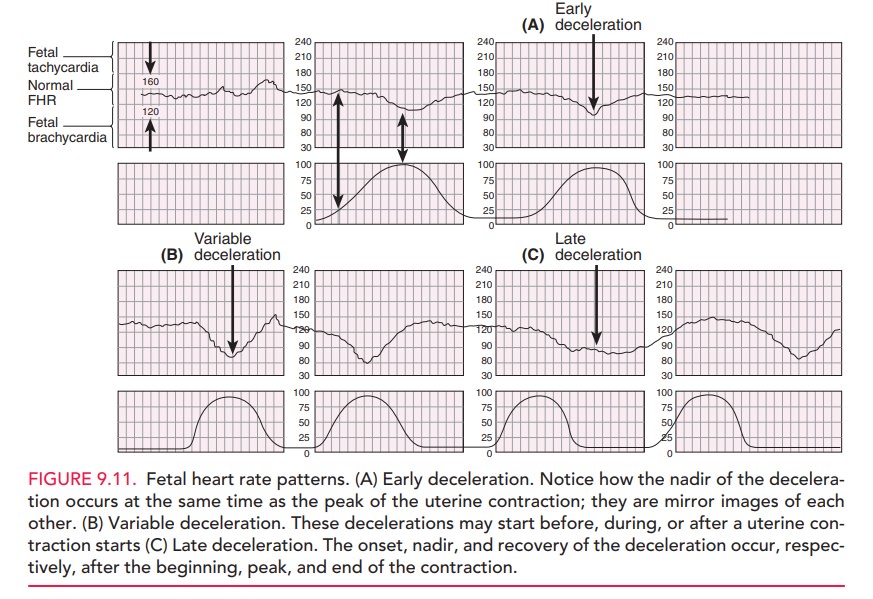 Decelerations Fetal heart ratedecelerationsare visuallyapparent decreases in FHR from the baseline. They can beeither gradual (onset to nadir in 30 seconds or more) or abrupt (onset to nadir in less than 30 seconds). Early de-celerations are associated with uterine contractions: thenadir of the deceleration occurs at the same time as the peak of the uterine contraction and, thus, is a “mirror image” of the contraction (Fig 9.11). Early decelerations are the result of pressure on the fetal head from the birth canal, digital examination, or forceps application that causes a reflex response through the vagus nerve with acetylcholine release at the fetal sinoatrial node. This response may be blocked with vagolytic drugs, such as at-ropine. Early FHR decelerations are considered physio-logic, and are not a cause of concern.