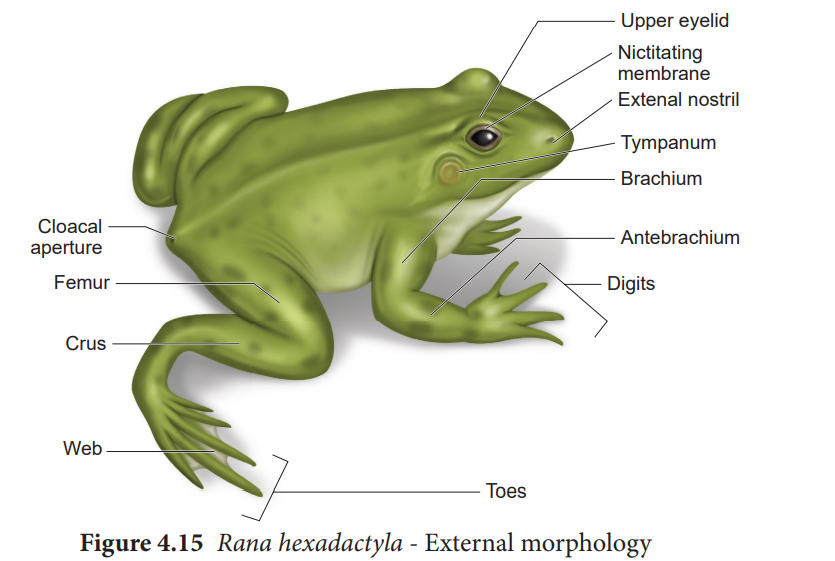 The body of a frog is streamlined to help in swimming.

The body of a frog is streamlined to help in swimming. It is dorso-ventrally flattened and is divisible into head and trunk. Body is covered by a smooth, slimy skin loosely attached to the body wall. The skin is dark green on the dorsal side 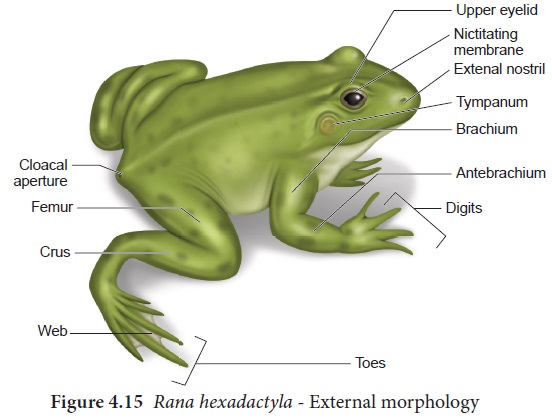 and pale ventrally. The head is almost triangular in shape and has an apex which forms the snout. The mouth is at the anterior end and can open widely. External nostrils are present on the dorsal surface of the snout, one on each side of the median line (Figure 4.15). Eyes are large and project above the general surface of the body. They lie behind the external nostrils and are protected by a thin movable lower eyelid, thick immovable upper eyelid and a third transparent eyelid called nictitating membrane. This membrane protects the eye when the frog is under water. A pair of tympanic membranes forms the ear drum behind the eyes on either side. Frogs have no external ears, neck and tail are absent. Trunk bears a pair of fore limbs and a pair of hind limbs. At the posterior end of the dorsal side, between the hind limbs is the cloacal aperature. This is the common opening for the digestive, excretory and reproductive systems.

Fore limbs are short, stumpy, and helps to bear the weight of the body. They are also helpful for the landing of the frog after leaping. Each forelimb consists of an upper arm, fore arm and a hand. Hand bears four digits.

Hind limbs are large, long and consist of thigh, shank and foot. Foot bears five long webbed toes and one small spot called the sixth toe. These are adaptations for leaping and swimming. When the animal is at rest, the hind limbs are kept folded in the form of letter ‘Z’ . Sexual dimorphism is exhibited clearly during the breeding season. The male frog has a pair of vocal sacs and a copulatory or nuptial pad on the ventral side of the first digit of each forelimb (Figure- 4.16). Vocal sacs assist in amplifying the croaking sound of frog. Vocal sacs and nuptial pads are absent in the -female frogs. 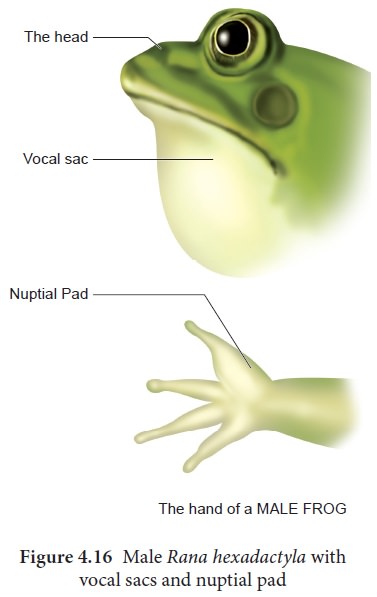