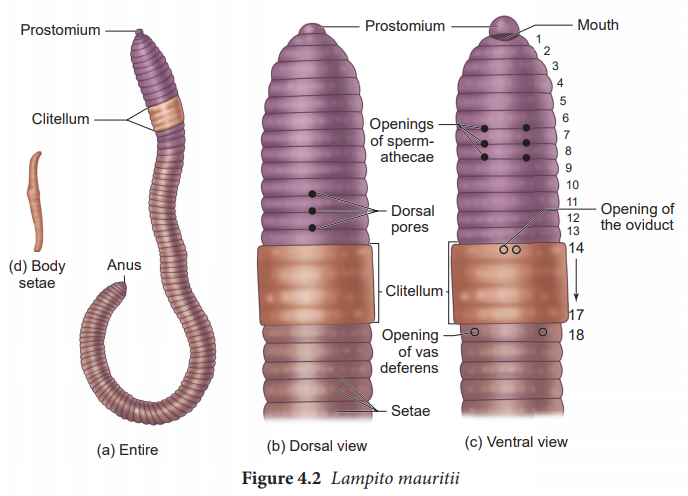 The mouth is found in the centre of the first segment of the body, called the peristomium.

Earthworm is a terrestrial invertebrate that inhabits the upper layers of the moist soil, rich in decaying organic matter. It is nocturnal and during the day it lives in burrows made by burrowing and swallowing the soil. In gardens, they can be traced by their faecal deposits known as worm castings on the soil surface. Earthworms are considered as “Friends of Farmers”. The common Indian earthworms are Lampito mauritii (Syn. Megascolex mauritii), Perioynx excavatus and Metaphire posthuma (Syn. Pheretima posthuma). Earthworms are also conveniently classified based on their ecological strategies as epigeics, anecics and endogeics (Figure 4.1). Epigeics (Greek for “up on the earth”) are surface dwellers, eg. Perionyx excavatus and Eudrilus eugeniae. Anecics (Greek for “out of the earth”) are found in upper layers of the soil, eg. Lampito mauritii, Lumbricus terrestris. Endogeics (Greek for “within the earth”) are found in deeper layers of the soil eg. Octochaetona thurstoni. 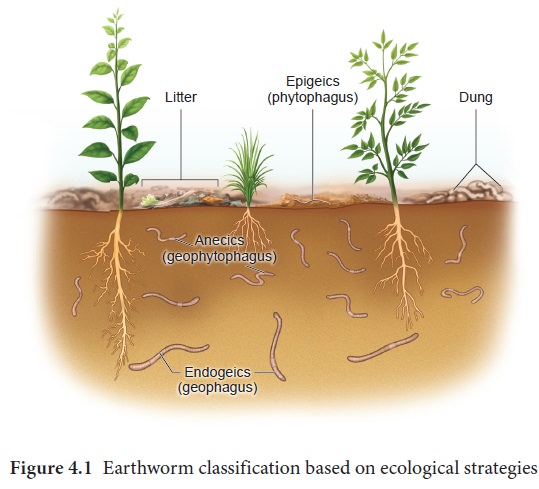 Lampito mauritii is commonly found in Tamil Nadu. It has a long and cylindrical narrow body which is bilaterally symmetrical. L. mauritii is 80 to 210 mm in length with a diameter of 3.5 – 5 mm, and is light brown in colour, with purplish tinge at the anterior end. This colour of the earthworm is mainly due to the presence of porphyrin pigment. The body of the earthworm is encircled by a large number of grooves which divides it into a number of compartments called segments or metameres (Figure 4.2). L. mauritii consists of about 165 – 190 segments. The dorsal surface of the body is marked by a dark mid dorsal line (dorsal blood vessel) along the longitudinal axis of the body. The ventral surface is distinguished by the presence of genital openings. The mouth is found in the centre of the first segment of the body, called the peristomium. 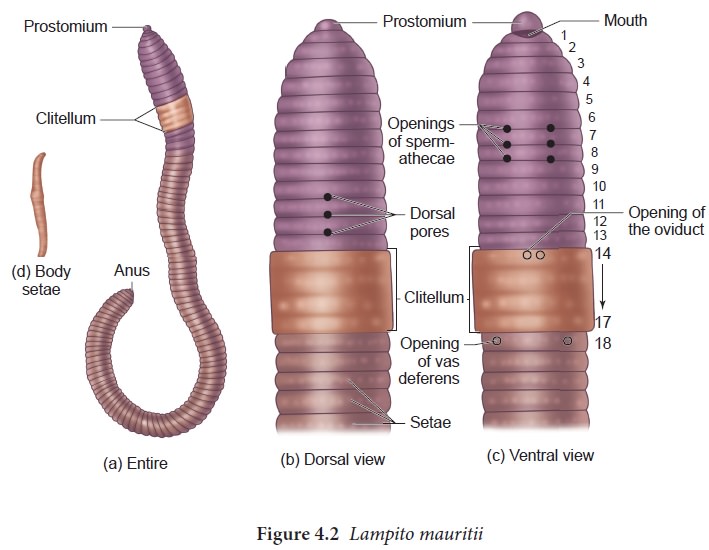 Overhanging the mouth is a small flap called the upper lip or prostomium. The last segment has the anus called the pygidium. In mature worms, segments 14 to 17 may be found swollen with a glandular thickening of the skin called the clitellum. Thishelps in the formation of the cocoon. Due to the presence of clitellum, the body of an earthworm is divided into pre clitellar region (1st – 13th segments), clitellar region (14th – 17th segments) and the post – clitellar region (after the 17th segment). In all the segments of the body except the first, last and clitellum, there is a ring of chitinous body setae. This body setae arises from a setigerous sac of the skin and it is curved as S – shaped. Setae can be protruded or retracted and their principal role is in locomotion.

The external apertures are the mouth, anus, dorsal pores, spermathecal openings, genital openings and nephridiopores. The dorsal pores are present from the 10th segment onwards. The coelomic fluid communicates to the exterior through these pores and keeps the body surface moist and free from harmful microorganisms. Spermathecal openings are three pairs of small ventrolateral apertures lying intersegmentally between the grooves of the segments 6/7, 7/8 and 8/9. The female genital aperture lies on the ventral side in the 14th segment and a pair of male genital apertures are situated latero-ventrally in the 18th segment. Nephridiopores are numerous and found throughout the body of the earthworm except a few anterior segments, through which the metabolic wastes are eliminated.