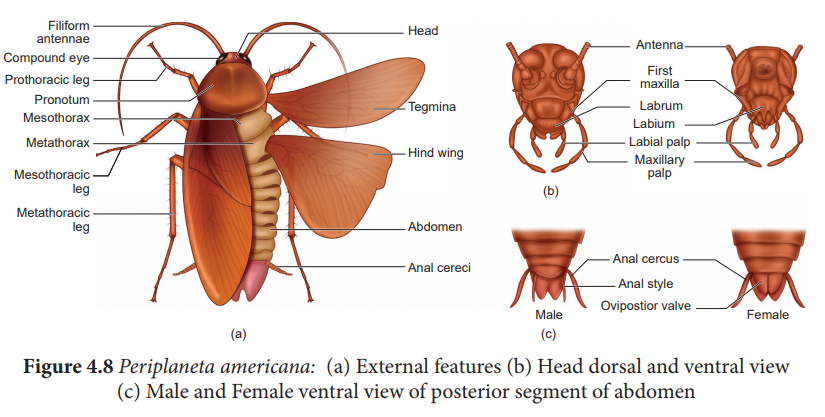 The adult cockroaches are about 2 to 4 cm in length and about 1cm in width.

Cockroach is a typical cosmopolitan insect and exhibits all the fundamental characteristics of Class Insecta. Generally cockroaches are reddish brown or black bodied with a light brown margin in the first thoracic segment. They are omnivores, nocturnal, living in damp and warm places and are quite common in kitchens, hotels, bakeries, restaurants, warehouse, sewage and public places. Periplaneta is a cursorial (swift runner) animal. It is dioecious and oviparous and exhibits parental care. They carry with them harmful germs of various bacterial diseases like cholera, diarrhoea, tuberculosis, and typhoid and hence are known as “Vectors”.

The adult cockroaches are about 2 to 4 cm in length and about 1cm in width. The body of the cockroach is compressed dorso-ventrally, bilaterally symmetrical, segmented and is divisible into three distinct regions – head, thorax and abdomen.

The entire body is covered by a hard, brown coloured, chitinous exoskeleton. In each segment, exoskeleton has hardened plates called sclerites, which are joined together by a delicate and elastic articular membrane or arthrodial membrane. The sclerites of the dorsal side are called tergites, those on the ventral side are called sternites and those of lateral sides are called pleurites.

The head of cockroach is small, triangular lies at right angle to the longitudinal body axis. the mouth parts are directed downwards so it is hypognathous. It is formed by the fusion of six segments and shows great mobility in all directions due to a flexible neck (Figure 4.8). The head capsule bears a pair of large, sessile, and reniform compound eyes, a pair of antennae and appendages around the mouth. Antennae have sensory receptors that help in monitoring the environment. The appendages form the mouth parts which are of biting and chewing type (Mandibulate or Orthopterus type). The mouth parts consist of a labrum (upper lip), a pair of mandibles, a pair of maxillae, a labium (lower lip) and a hypopharynx (tongue) or lingua (Figure 4.9). The thorax consists of three segments – Prothorax, Mesothorax and Metathorax. The prothoracic segment is the largest. The head is connected with thorax by a short extension of the prothorax called as the neck or cervicum. Each thoracic segment bears a pair of walking legs. Due to th e presence of three pairs of walking legs it is also called hexapoda (hexa-six, poda-feet) All the three pairs of walking legs are similar and each leg consists of five segments – coxa (large), trochanter (small), femur (long and broad), tibia (long and thick) and tarsus. The last segment of the leg - tarsus has five movable joints or podomeres or tarsomeres. Cockroach has two pairs of wings, the first pair arises from mesothorax and protectsthe hind wings when at rest, and is called elytra or tegmina. The second pair of wings arises from the metathorax and are used in flight. The abdomen in both male and female consists of 10 segments. Each segment is covered by the dorsal tergum, the ventral sternum and between them a narrow membranous pleuron on each side. In females, the 7th sternum is boat shaped and together with the 8th and 9th sterna forms a brood or genital pouch whose anterior parts contains female gonopore, spermathecal pores, collaterial glands and posterior parts constitutes the oothecal chamber in which the cocoons are formed. In males, the genital pouch lies at the hind end of the abdomen bound dorsally by 9th and 10th terga and ventrally by the 9th sternum. It contains the dorsal anus and ventral male genital pore. In both the sexes, genital apertures are surrounded by sclerites called gonapophysis. Male bears a pair of short and slender anal styles in the 9th sternum which are absent in the female. In both sexes, the 10th segment bears a pair of jointed filamentous structures called anal cerci and bears a sense organ that is receptive to vibrations in air and land. The 7th sternum of male has a pair of large and oval apical lobes or gynovalvular plates which form a keel like structure which distinguishes the male from the female. 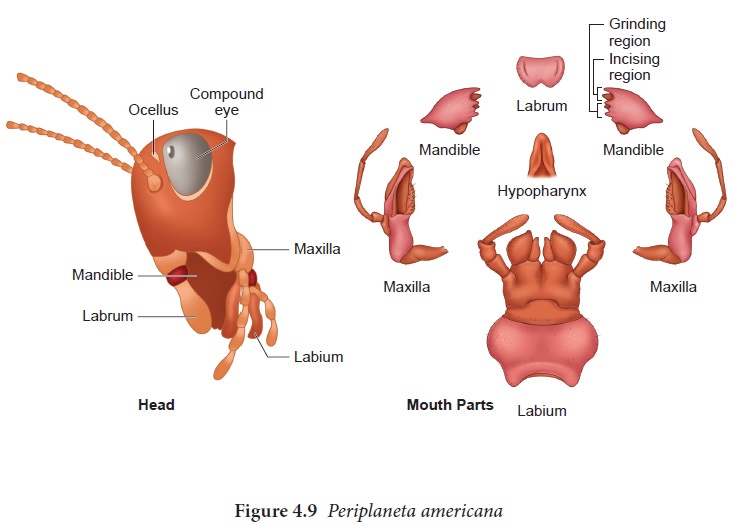 Differences between male and female cockroach