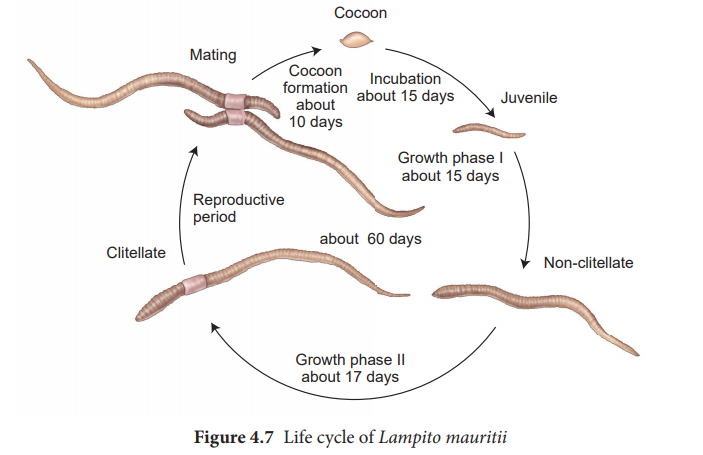 Lampito mauritii begins its life cycle, from the fertilized eggs.

Lampito mauritii begins its life cycle, from the fertilized eggs. The eggs are held in a protective cocoon. These cocoons have an incubation period of about 14- 18 days after which they hatch to release juveniles (Figure 4.7). The juveniles undergo changes into non-clitellate forms in phase – I after about 15 days, which then develops a clitellum, called the clitellate at the end of the growth phase – II taking 15 - 17 days to complete. During the reproductive stage, earthworms copulate, and later shed their cocoons in the soil after about 10 days. The life cycle of Lampito mauritii takes about 60 days to complete.

Earthworms are known as “friends of farmer” because they make burrows in the soil and make it porous which helps in respiration and penetration of developing plant roots. Vermiculture, vermicomposting, vermiwash and wormery are inter-linked and interdependent processes, collectively referred as Vermitech. Lampito mauritti helps in recycling of dead and decayed plant material by feeding on them. Artificial rearing or cultivation of earthworms involves new technology for the betterment of human beings. This process is known as Vermiculture. The process of producing compost using earthworms is called Vermicomposting. Vermiwash is a liquid manure or plant tonic obtained from earthworm. It is used as a foliar spray and helps to induce plant growth. It is a collection of excretory products and mucus secretion of earthworms along with micronutrients from the soil organic molecules. Earthworms can be used for recycling of waste food, leaf, litter and biomass to prepare a good fertilizer in container known as wormery or wormbin. It makes superior compost than conventional composting methods. Earthworms are also used as bait in fishing. 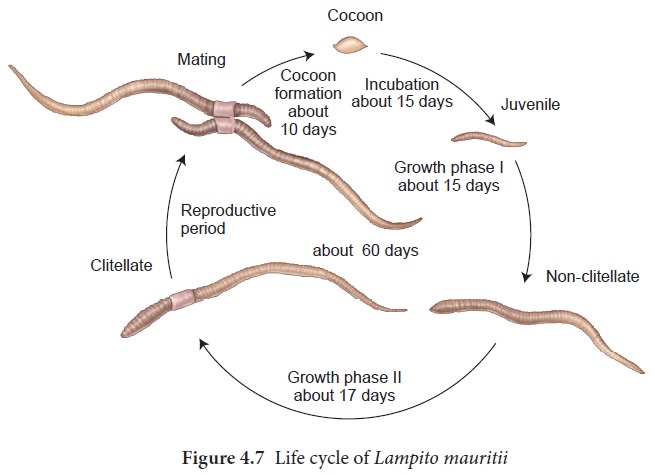