Excretion is the process of elimination of metabolic waste products from the body.

Excretion is the process of elimination of metabolic waste products from the body. In earthworm, excretion is effected by segmentally arranged, minute coiled, paired tubules called nephridia. There are three types of nephridia; (i) pharyngeal or tufted nephridia – present as paired tufts in the 5th - 9th segments (ii) Micronephridia or Integumentary nephridia – attached to the lining of the body wall from the14th segment to the last which open on the body surface (iii) Meganephridia or septal nephridia – present as pair on both sides of intersegmental septa of the 19th segment to the last and open into intestine (Figure 5). The meganephridium has an internal funnel like opening called the nephrostome, which is fully ciliated. The nephrostome is in the preceding segment and the rest of the tube is in the succeeding segment. This tube consists of three distinct divisions, the ciliated, the glandular and the muscular region. The waste material collected through the ciliated funnel is pushed into the muscular part of nephridium by the ciliated region. The glandular part extracts the waste from the blood and finally the wastes exit out through the nephridiopore.

Besides nephridia, special cells on the coelomic wall of the intestine, called chloragogen cells are present. They extract the nitrogenous waste from the blood of the intestinal wall, into the body cavity to be sent out through the nephridia. 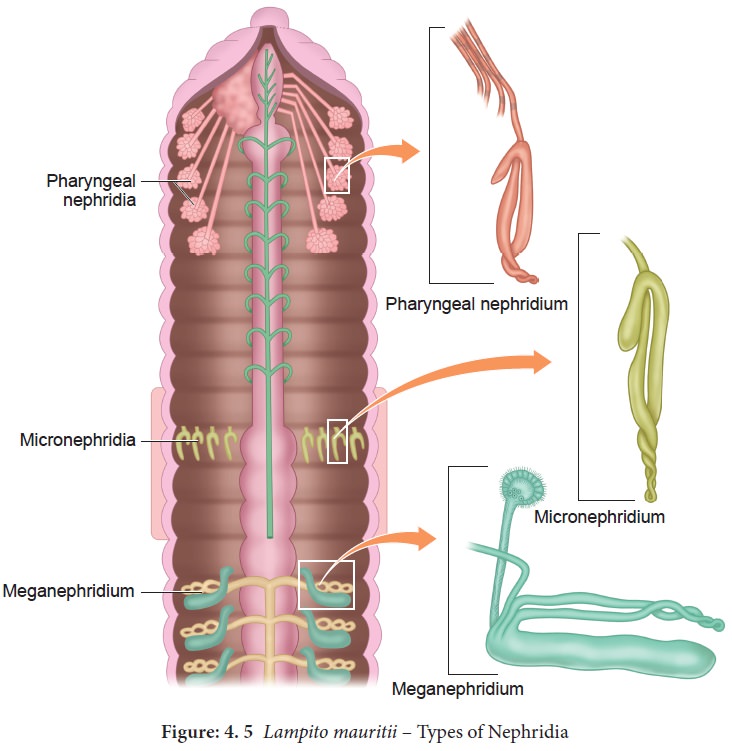 Earthworms are hermaphrodites or monoecious i.e. male and female reproductive organs are found in the same individual (Figure 4. 6). Self fertilization is avoided because two sex organs mature at different times, which means the sperm develops earlier than the production of ova (Protandrous). Thus cross fertilization takes place. 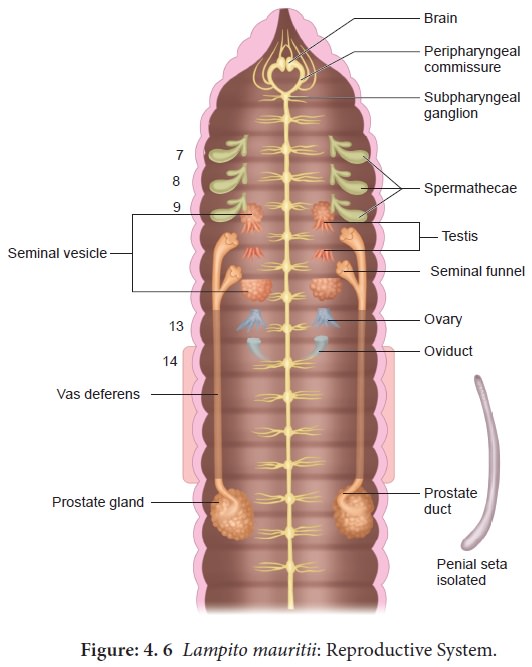 In the male reproductive system, two pairs of testes are present in the 10th and 11th segments. The testes give rise to the germ cells orspermatogonia, which develops into spermatozoa in the two pairs of seminal vesicles. Two pairs of seminal funnels called ciliary rosettes are situated in the same segments as the testes. The ciliated funnels of the same side are connected to a long tube s deferens. The vasa deferentia run upto the 18th segment where they open to the exterior through the male genital aperture. The male genital aperture contains two pairs of penial setae for copulation. A pair of prostate glands lies in the 18th – 19th segments. The secretion of the prostate gland serves to cement the spermatozoa into bundles known as spermatophores.

The female reproductive system consists of a pair of ovaries lying in the 13th segment. Each ovary has finger like projections which contain ova in linear series. Ovarian funnels are present beneath the ovaries which continue into the oviducts. They join together and open on the ventral side as a single median female genital pore in the 14th segment. Spermathecae or seminal receptacles are three pairs lying in segments 7th, 8th and 9th, opening to the exterior on the ventral side between 6th & 7th, 7th & 8th and 8th & 9th segments. They receive spermatozoa from the partner and store during copulation.

A mutual exchange of sperms occurs between two worms during mating. One worm has to find another worm and they mate juxtaposing opposite gonadal openings, exchanging the sperms. Mature egg cells in the nutritive fluid are deposited in the cocoons produced by the gland cells of the clitellum which also collects the partner’s sperms from the spermthecae. Fertilization and development occurs within the cocoons, which are deposited in the soil. After about 2 – 3 weeks, each cocoon produces baby earthworms. Development is direct and no larva is formed during development.