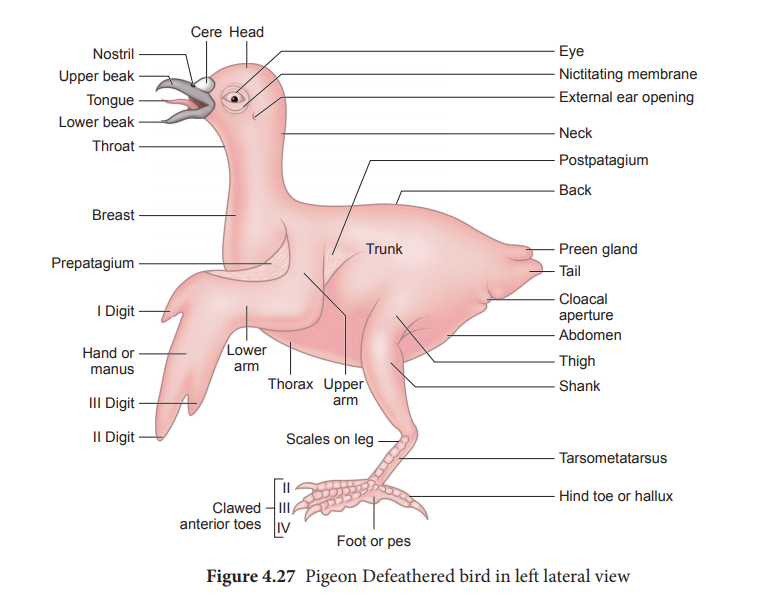 The compact, boat shaped streamlined body of pigeon is well adapted for their aerial mode of life.

Head is comparatively small, spherical and situated at the anterior most part of the body. Beaks present anteriorly are formed by the elongation of upper and lower jaw and they are devoid of teeth. At the base of the beak are the external nostrils overhung by a swollen, sensitive soft skin called cere. Eyes are prominent, round and laterally present. Eyes are protected by an upper eyelid, lower eyelid, and a transparent nictitating membrane. Posterior to the eyes are the ear openings which lead to the tympanic membrane by short tube, external auditory meatus. Neck is flexible, cylindrical and long which connects the head with the trunk. The spindle shaped trunk bears a pair of wings and a pair of legs. The cloacal aperture opens ventrally at the hind end of the trunk. Dorsally the base of the tail has a knob like papilla, which bears the opening of the preen gland or uropygial gland. It is the only cutaneous gland present and its oily secretion is used for lubricating or preening the feathers. The tail is used as a rudder in flight. Fore limbs are modified into wings. The wings have three typical regions, the upper arm (brachium), lower arm (ante - brachium) and the hand (manus). Three clawless and imperfectly marked digits are present on each hand. While at rest, each forelimb is folded in the form of ‘Z’; during flight they are extended. With the modification of the forelimbs for flight, the whole weight of the body is supported by the hind limbs , while the bird is at rest or walking; the hind limbs are therefore attached anteriorly from the trunk to balance the body and support the weight of the body at rest. They are warm blooded or homeothermic.

The exoskeleton of pigeon is derived from the epidermis and occurs in the form of horny claws, scales and feathers. Beaks are used for ingestion, fighting and preening of feathers. Claws are used for walking and perching. Epidermal scales are present on the foot and the entire body is covered by feathers. Arrangement of feathers on the body of bird is called pterylosis . Feathers are of three kinds: large quill feathers on wings and tail which are used for flight; contour feathers, form a covering for the body and filoplumes, lie between the contour feathers. The nestlings are covered with down feathers which resemble the filoplumes. 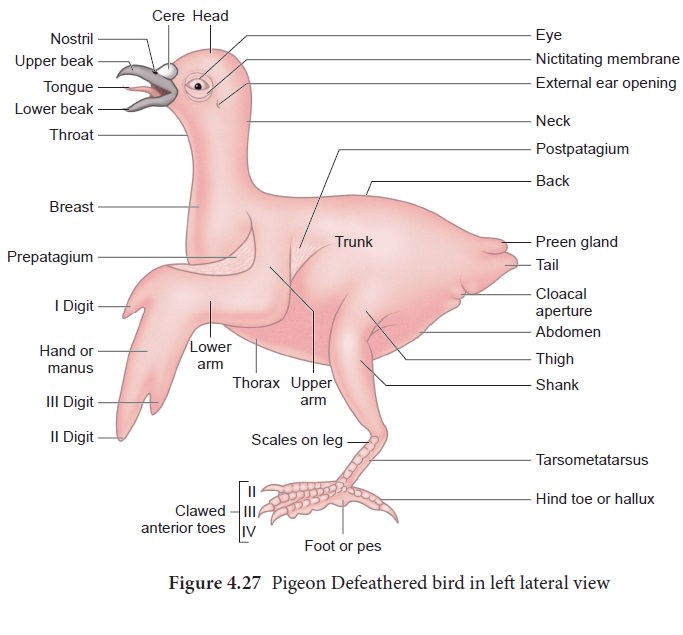 Structure of a Quill feather

The quill feather has a stem or scapus and is divided into a lower hollow part called calamus or quill and an upper solid portion called rachis. Lower end of the stem has an opening called inferior umbilicus which receives a dermal papilla, supplying nutrients and pigments for the growing feathers (Figure 4.28)

A second opening the superior umbi-licus occurs at the junction of the quill and the rachis, on the inner face of the feather; close to this opening is a small tuft of soft feathers called after shaft . Attached to the rachis are small filament or barbs ; the ra-chis with the barbs constitute the vane or the vexillum. Each barb is fringed with an oblique set of processes called barbules, which have minute hooklets or barbi-cels by which adjacent barbs are hooked together to form a continuous blade for striking the air during flight.