The presence of certain metals in high concentrations may be toxic to humans.

The presence of certain metals in high concentrations may be toxic to humans. To diagnose metal toxicity, three features have to be identified, namely, a source of the toxic metal, the presence of signs and symptoms typical of toxicity by that metal and increased concentrations of the metal in the body tissues. Metals that are commonly screened for toxicity include lithium, aluminum and the heavy metals lead, arsenic, cadmium and mercury. Lithium is widely used therapeutically to treat patients with certain psychiatric disorders. However, plasma concentrations of lithium in excess of 1.5 mmol dm–3 should be avoided and regular measurements of serum lithium concentrations are important in monitoring therapy. Lithium toxicity is associated with tremors, drowsiness, tinnitus, blurred vision, polyuria, hypothyroidism and, in severe cases, renal failure and coma.

Acute poisoning with aluminum is extremely rare. Indeed, aluminum compounds are used for their antacid properties. The dietary intake of aluminum is 5 to 10 mg day–1 and this amount is removed completely by the kidneys. Unfortunately, patients with renal failure are susceptible to aluminum toxicity. They cannot remove the aluminum and, as the water used in dialysis may contain aluminum that can enter the body through the dialysis membrane, the metal can build up to toxic concentrations and cause osteodystrophy and encephalopathy. Aluminum toxicity is diagnosed by determining its concentration in plasma. Chronic toxicity occurs at concentrations above only 3 Mmol dm–3 whereas 10 Mmol dm–3 can cause acute poisoning. The treatment is aimed mainly at prevention. When aluminum poisoning does occur, then its excretion may be enhanced using chelating agents such as desferrioxamine. 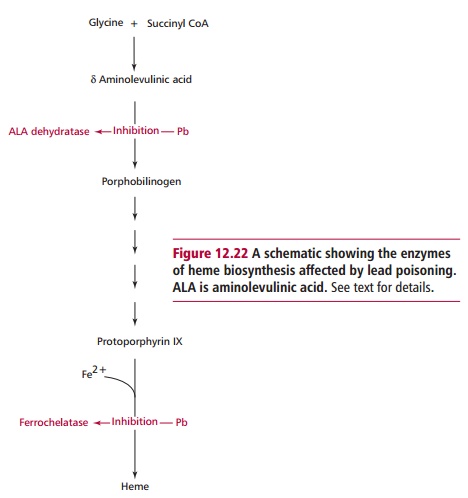 Lead is a heavy metal found in the environment. Common sources include paints, old water pipes, petrol fumes, industrial pollution and medication and cosmetics from the Indian subcontinent. Poisoning by lead can be acute, which is rare, or, more commonly, chronic. It results from inhalation, dermal absorption or ingestion, where it is actively absorbed by the GIT through the calcium transport system. All tissues are affected by lead poisoning although organ pathology is associated primarily with the nervous system and the blood. In the blood, lead is concentrated in the erythrocytes where it inhibits the activities of aminolevulinic acid (ALA) dehydratase and ferrochelatase, enzymes involved in the synthesis of heme (Figure 12.22). Inhibition of ALA dehydratase is the most sensitive measure of lead poisoning. Concentrations of lead in the blood in excess of 0.49 Mmol dm–3 are associated with illness in children. If the concentration of lead increases above 3.4 Mmol dm–3,individuals

whose occupation exposes them to lead must be removed from its source. Clinical features of lead poisoning include lethargy, abdominal discomfort, anemia, constipation, encephalopathy and motor peripheral neuropathy.

The management of patients with lead poisoning involves identifying the lead source and removing the patients from it. Patients are placed on chelating agents, such as EDTA (Figure 12.23) that is effective in both acute and chronic lead poisoning, but has to be given intravenously. Another chelating agent, dimercaptosuccinic acid is less efficient as a chelator but can be given orally. 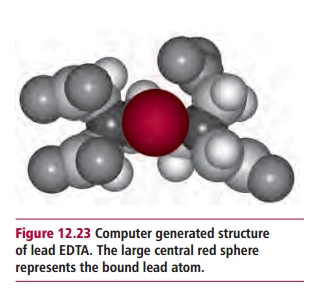 Chronic arsenic poisoning is associated with well water contaminated with arsenical pesticides or, classically, with murder! Arsenic occurs in a number of different forms, most of which are toxic although arsenite (AsO2–) is much more 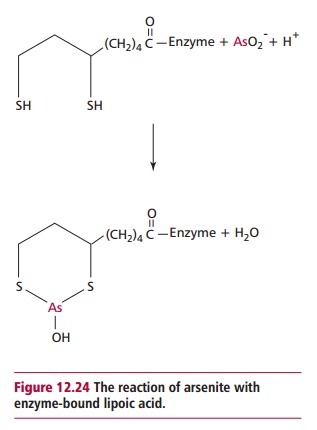 so than arsenate (HAsO4–). Arsenate substitutes for Pi in biological systems, hence less ATP is produced. Arsenite toxicity is associated with the formation of a stable complex with enzyme-bound lipoic acids (Figure 12.24). Indeed, arsenic poisoning can be explained by its ability to inhibit enzymes, such as pyruvate dehydrogenase, 2-oxoglutarate dehydrogenase and branched chain α -oxoacid dehydrogenase, that require lipoic acid as a coenzyme. Chronic poisoning with arsenic is usually associated with diarrhea, polyneuropathy and dermatitis whereas acute poisoning with arsenic gives rise to severe gastrointestinal pain, vomiting and shock. Poisoning can be diagnosed by determining the concentration of arsenic in the hair or fingernails of the victim. Values larger than 0.5 µg g–1 of hair indicate a significant exposure to arsenic. The hair of a person chronically exposed to arsenic could have 1000 times as much as this. Treatment of arsenic poisoning is aimed at enhancing its excretion using chelating agents.

Chronic cadmium toxicity may occur in workers exposed to fumes in cadmium-related industries, although concentrations of cadmium are twice as high in tobacco smokers compared with nonsmokers. Concentrations in the serum greater than 90 nmol dm–3 are associated with toxicity. Cadmium poisoning causes influenza-like symptoms, such as chills, fever, muscular aches, nausea, vomiting, abdominal pain, and diarrhea. However, these symptoms may resolve after a week provided there is no respiratory damage. More severe exposures can cause bronchitis and pulmonary edema and occasionally cardiovascular collapse. Long-term exposure may lead to nephrotoxicity with proteinuria, bone disease and hepatotoxicity. The treatment of cadmium poisoning usually involves removal from exposure. Treatment with chelating agents is not effective because the soluble form of cadmium damages the kidney.

Mercury poisoning can be acute or chronic. It occurs following exposure to mercury vapor, inorganic salts or organic compounds of mercury. Mercury poisoning is primarily occupational but can be caused by contaminated food. The clinical features of acute mercury poisoning include coughing, bronchiolitis, pulmonary edema, pneumonitis, peripheral neuropathy and neuropsychiatric problems. Chronic mercury poisoning causes anorexia, sweating, insomnia, impaired memory, paresthesiae of the lips and extremities and renal tubular damage. Mercury poisoning is usually diagnosed by determining the concentration of mercury in serum and urine. Urine mercury/creatinine ratios are often used to assess exposure. Ratios of 40 to 100 nmol mmol–1 require monitoring and further investigation, while values of greater than 100 nmol mmol–1 require the patient to be removed from the source of mercury.