Ethanol is an addictive drug and its abuse can lead to dependency and alcoholism. Its abuse is increasingly common in the developed world.

Ethanol is an addictive drug and its abuse can lead to dependency and alcoholism. Its abuse is increasingly common in the developed world. The toxic effects of chronic alcohol abuse on the liver, brain and GIT are widely known. Ethanol can also modify the effects of other drugs, for example it inhibits the hydroxylation of barbiturates by the P-450 system preventing their ready excretion by the kidneys.

The metabolism of ethanol occurs mainly in the liver by one of two mechanisms. Normally only small amounts are degraded by the P-450 system (Figure 12.12), although this oxidation can become of major importance because the P-450 system is induced by chronic alcohol consumption. The 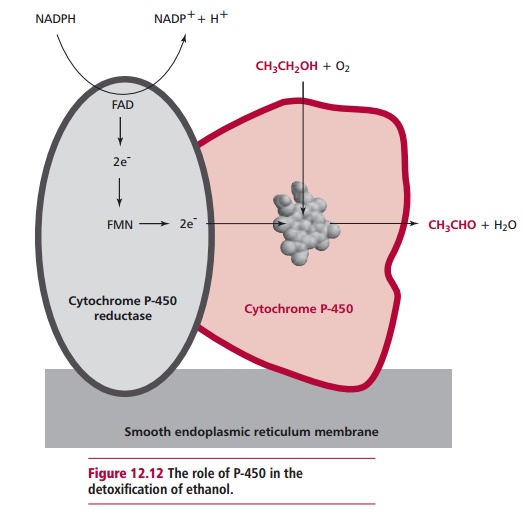 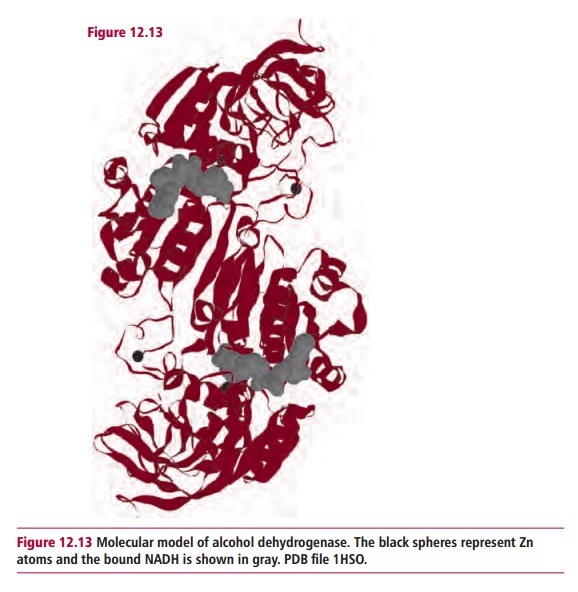 major catabolic pathway is to oxidize ethanol to the corresponding aldehyde, ethanal, in a reaction catalyzed by alcohol dehydrogenase, ADH (Figure12.13).

The effectiveness of ADH varies between different populations and hence the undesirable effects of drinking can appear after widely varied intakes. The ethanal may subsequently be oxidized to ethanoic acid (acetic acid) by aldehyde dehydrogenase, ALDH (Figure 12.14). 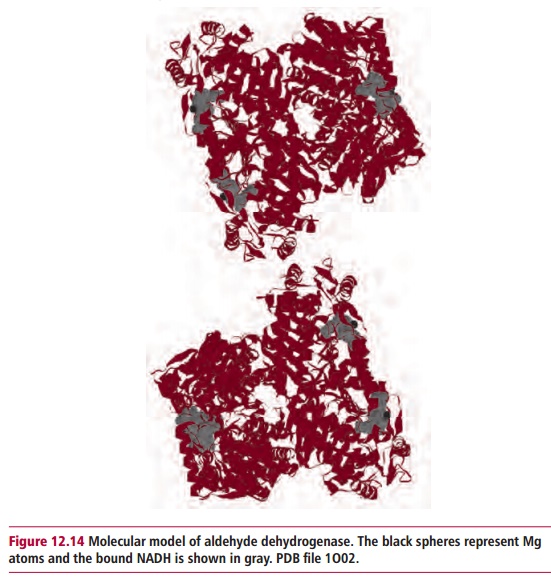 Much of the acetate made from ethanol escapes into the blood and can result in acidosis . The effect of both enzymes is to increase the NADH/NAD+ ratio, that is, alcohol consumption leads to the accumulation of NADH with consequent severe effects. The increased NADH inhibits fatty acid oxidation and stimulates the synthesis of triacylglycerols in the liver producing a fatty liver. The oxidation of lactate to pyruvate is also inhibited, slowing gluconeogenesis (Margin Note 12.3). The increased lactate exacerbates the acidosis and the decreased gluconeogenesis may cause hypoglycemia.

The capacity of liver mitochondria to oxidize acetate to CO2 is limited because the activation of acetate to acetyl CoA requires ATP:

Adenosine triphosphate is now in short supply because glycolysis, which requires free NAD, is slowed and because the processing of acetyl CoA by the TCA cycle is blocked since NADH inhibits the regulatory enzymes isocitrate dehydrogenase and 2-oxoglutarate dehydrogenase. Acetyl CoA is converted to ketone bodies that are released into the blood, intensifying the acidosis caused by acetate and lactate. Acetaldehyde also accumulates and this extremely reactive compound can bind to liver proteins, impairing their functions and causing severe damage to liver cells, leading to their death. Acetaldehyde can also escape from the liver and react with blood proteins to form stable adducts. These can provide useful markers of the past drinking activity of an individual.

Liver damage from excessive alcohol consumption occurs in three stages. The first stage is the formation of the fatty liver described above. This condition, in the absence of other complications, is readily reversible within four to six weeks if alcohol is avoided. The second stage is the occurrence of alcoholic hepatitis when groups of liver cells die. This leads to inflammation and can be fatal. In the third stage, the patient may develop cirrhosis, a condition seen in 10% to 15% of alcoholics (Figure 12.15 (A) and (B)). Approximately half of all cases of cirrhosis are due to alcoholic liver disease. Cirrhosis occurs when fibrous structures and scar tissue are produced around the dead cells. This impairs many of the biochemical functions of the liver, for example, cirrhotic liver cannot convert ammonia to urea and the concentration of ammonia in the blood rises. Ammonia is toxic to the nervous system and can cause comaand death. Ethanol also directly affects the central nervous system (CNS). For example, it enhances the inhibitory affects of F aminobutyric acid (GABA) at the GABAA receptor and the functions of some 5-hydroxytryptamine receptors, in addition to numerous other membrane proteins. The resulting depressive effects of these activities are well known.

Chronic liver damage invariably results in malnutrition, partly due to malabsorption and partly because the metabolism of nutrients by the liver is defective. However, many alcoholics are malnourished because of dietary inadequacies. While ethanol supplies most of their energy needs they may be ingesting insufficient amounts of other nutrients, particularly proteins and vitamins . In addition, chronic alcohol ingestion can damage the mucosal lining of the GIT and pancreas as well as the liver . Alcoholics require increased amounts of vitamins and some trace elements because of the metabolic load experienced and their increased excretion. For example, niacin, although not strictly a vitamin since it can be formed, albeit very inefficiently, from tryptophan , is necessary to form the coenzymes, NAD+ and NADP+. A borderline deficiency of niacin leads to glossitis (redness) of the tongue while a pronounced deficiency leads to pellagra, with dermatitis, diarrhea and dementia. In developed countries, pellagra is rarely encountered other than in alcoholics, given their severe malabsorption problems, hence dietary supplies of niacin and tryptophan are required. A severe zinc deficiency also occurs primarily in alcoholics, especially those suffering from cirrhosis. Heavy drinkers frequently suffer from GIT varicose veins and diarrhea caused by a variety of factors, including ethanol-exacerbated lactase deficiency and interference with normal peristalsis. Steatorrhea is also common, due to deficiencies in folic acid and bile salts in the GIT .

The obvious treatment for alcoholic liver disease and cirrhosis is abstinence. Given the addictive nature of ethanol, this may be difficult to maintain. Unfortunately, patients presenting with severe alcoholic hepatitis have a high mortality even when abstinence is successful. Although a number of pharmacological treatments have been attempted as therapies, none has been successful. However, supportive nutritional management in cases of acute and chronic liver disease is essential to achieve electrolyte, vitamin and protein replenishments. The only treatment for advanced cirrhosis is a liver transplant .

The major enzyme involved in ethanol metabolism, alcohol dehydrogenase, has a broad specificity and can catalyze the oxidation of a range of alcohols. This allows ethanol to be used as a competitive inhibitor of the enzyme in the treatment of poisoning by other alcohols, such as methanol and ethylene glycol.