Xenobiotics, whether drugs or toxins, are normally absorbed through the lungs, GIT or the skin. In addition, drugs may be injected through intramuscular, intraperitoneal, subcutaneous or intravenous routes.

Xenobiotics, whether drugs or toxins, are normally absorbed through the lungs, GIT or the skin. In addition, drugs may be injected through intramuscular, intraperitoneal, subcutaneous or intravenous routes. Following absorption, the xenobiotics are distributed around the body and a proportion will be absorbed by cells, while some may be directly excreted from the kidneys. Humans also have a number of physiological mechanisms devoted to detoxifying ingested xenobiotics, which largely involve enzyme activities in the liver and kidneys. Many of the biochemical detoxification mechanisms convert the xenobiotic to more water-soluble compounds that are more easily excreted. These mechanisms can sometimes prove inadequate. Also, in some unfortunate cases, the detoxification mechanisms form compounds that are even more toxic or carcinogenic than the original compound.

Treatment for poisoning involves administering an antidote to the toxin or drug when one is available. For many common poisons this is not the case and therapy involves general supportive measures, such as decreasing their absorption from the GIT, increasing the rate of elimination from the body or altering the distribution within the body to protect susceptible tissues. An optimal therapeutic concentration of a drug can only be maintained in the plasma if the patient fully complies with the prescribed dose. Unfortunately, the most common reason for emergency admissions to hospitals is because of an excessive intake of a drug prescribed for medication. Other causes of poisoning may be accidental, suicidal or homicidal in intent.

Many poisons are lipophilic and are only sparingly soluble in water and so cannot easily be excreted by the kidneys. Thus a major aim of detoxification in the liver is to convert them to compounds that have increased water solubility and are more readily removed by the kidneys. Detoxification reactions in the liver are favored by its microstructure, which consists of lobules with a central vein and peripheral branches of the hepatic artery and the hepatic portal vein. Blood leaves branches of the hepatic artery and hepatic portal vein and percolates from the periphery of the lobule through sinusoids, bathing the hepatocytes of the lobule as it flows (Figure 12.2). While it is unusual for blood to come into such close contact with tissue cells, this arrangement allows poisons to be removed as the blood flows through the lobule to be collected by branches of the hepatic vein. Also, mitotic divisions within the organ replace those liver cells that are irreparably damaged. It goes without saying that a disease of the liver can compromise its ability to deal with toxic substances, which can lead to significant clinical consequences. 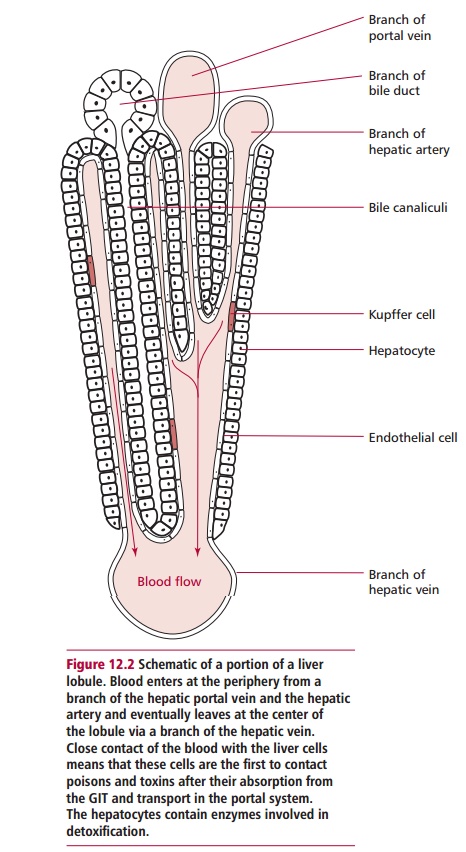 Detoxification is achieved in two phases. In Phase I, the xenobiotic is oxidized and/or hydroxylated by mixed function oxidase (MFO) activities of monooxygenase systems. There are two such systems, a flavin-containing monooxygenase (FMO) system used in oxidation reactions of drug metabolism and a cytochrome P-450 monooxygenase system that oxidizes carbon atoms. Both systems require NADPH as a coenzyme and dioxygen and are localized in the smooth endoplasmic reticulum. In Phase II, the oxidized xenobiotic product is linked to a polar compound, such as a glucuronate or sulfate group forming water-soluble conjugates in further enzyme-catalyzed reactions. The enzymes that catalyze both the Phase I and II reactions have broad specificities and are therefore able to detoxify a wide range of organic toxins and drugs. This is essential since the range of xenobiotics to which the body may be exposed is enormous, and individual enzyme systems could not be available to deal with each one separately. At least 50 different members of the cytochrome P-450 enzyme family are found in the smooth endoplasmic reticulum of hepatocytes (Figure 12.3). They catalyze the hydroxylation of a wide variety of substances by incorporating one of the oxygen atoms into the xenobiotic to form the hydroxyl group,

while the other oxygen atom is reduced to water. The NADPH supplies an electron to complete the Phase I stage.

The same enzyme system is able to convert unsaturated compounds to an epoxide, which is a substrate for epoxide hydrolase that catalyzes the conversion of the epoxide to a glycol.

The actions of these enzymes form hydroxyl groups that increase the water solubility of the original poison or drug and also form attachment points for the actions of Phase II enzymes. These include glucuronyl transferases of the smooth endoplasmic reticulum membrane and sulfotransferase in the cytosol, which use UDP-glucuronate and 3a-phosphoadenosyl 5a-phosphosulfate (PAPS) as the respective donor substrates:

The increased water solubility of the products facilitates their excretion by the kidneys, although small amounts are also lost in bile to the feces.

It is unfortunately the case that a number of poisons are rendered more toxic by oxidation by the P-450 system. Indeed, a number of fat-soluble compounds that are relatively harmless because they would normally accumulate in adipose tissue are converted into potentially lethal materials because of the increase in water solubility. Thus, a number of indirectly acting carcinogens, for example, benzo[a]pyrene, found in cigarette smoke and the toxin aflatoxin B1 from Aspergillus flavus, are converted to highly carcinogenic products (Figure 12.4 (A) and (B)). 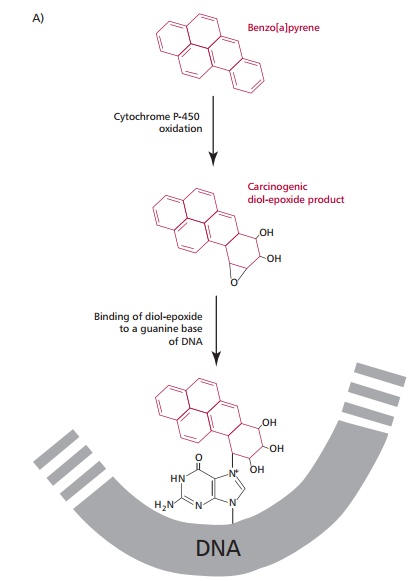 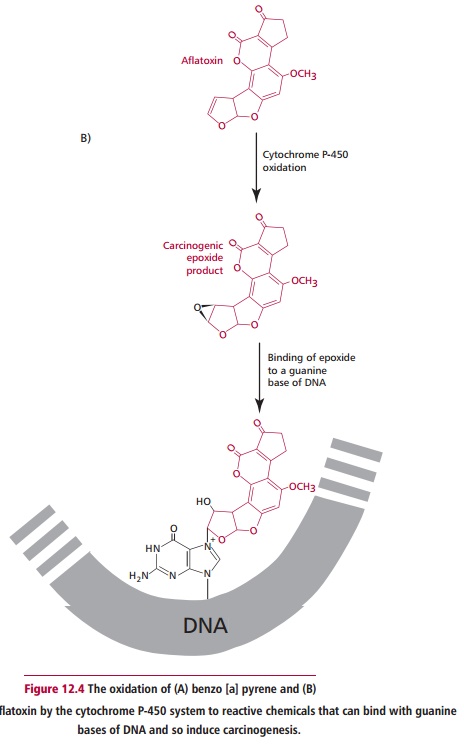