Aspirin (acetylsalicylic acid) is hydrolyzed in the body to salicylate, the active form of the drug (Figure 12.9), which has analgesic, antipyretic and anti-inflammatory properties. Salicylate is eliminated from the body by conjugation with glycine to form salicyluric acid and, to a lesser extent, with glucuronide to form phenol and acylglucuronides. A small amount is hydroxylated to gentisic acid. In an overdose, these pathways may become saturated and a large proportion of salicylate may be excreted unchanged in urine.

Like paracetamol, aspirin is widely and easily available and poisoning by aspirin overdose is therefore relatively common. Salicylate toxicity is due to a number of effects (Figure 12.10). An increase in the concentration of salicylate in the brain stimulates the respiratory center leading to hyperventilation, which can result in dehydration. In addition, hyperventilation causes a decline in the PCO2 and a rise in pH, that is, respiratory alkalosis . As PCO2 declines, the pH rises and less H2CO3 is formed. The kidneys retaining H+. These activities, rather than helping correct the respiratory alkalosis, contribute towards a latent metabolic acidosis. Salicylate also uncouples oxidative phosphorylation, decreasing ATP formation and increasing heat production, with sweating and hyperpyrexia, which further contributes to the dehydration and fluid loss. The decline in the amount of ATP stimulates glycolysis, and therefore pyruvate and lactate accumulate. An increase in glycogenolysis provides the required glucose for this increase. Eventually there may be depletion of glycogen giving rise to 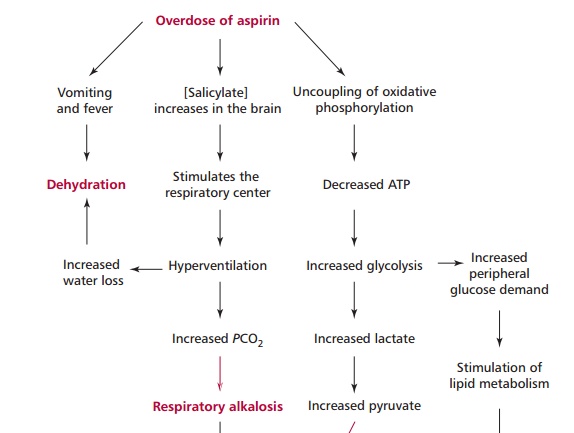 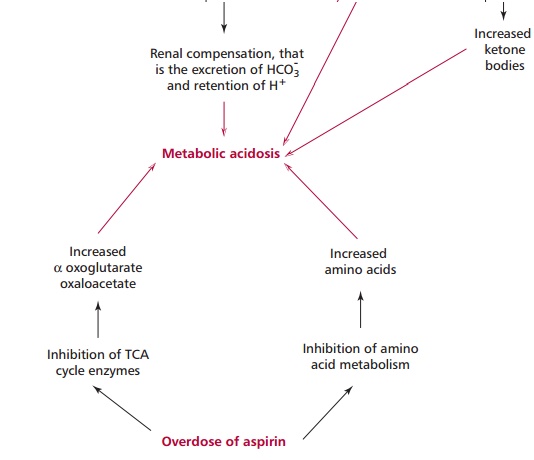 hypoglycemia and the catabolism of lipids producing ketone bodies . Salicylate also inhibits enzymes of the TCA cycle, leading to an accumulation of oxoglutarate and oxaloacetate, and of amino acid metabolism, causing an increase in amino acids that accentuates the metabolic acidosis. Fluid and electrolyte losses are increased by the nausea and vomiting.

Common therapeutic levels of salicylate are 50 mg dm–3 although they can be as high as 250 mg dm–3 in the serum of patients with rheumatoid arthritis . The potentially lethal dose of aspirin in adults is 24 to 30 g but death can occur in children under 18 months from as little as 300 mg. Signs of salicylate toxicity occur when concentrations are greater than 300 mg dm–3. In severe cases of aspirin poisoning, the concentrations in serum can be as high as 1000 mg dm–3.

Numerous symptoms are associated with aspirin poisoning, including nausea, vomiting, sweating, hyperventilation, tinnitus (buzzing noise in ear), confusion and/or unconsciousness and a severe loss of fluid.

The concentration of salicylate in plasma should be measured on presentation and every 4 to 6 h until it has fallen below the toxic range. This is necessary as salicylates precipitate in acid conditions and may therefore deposit in large amounts in the stomach. The consequence is delayed absorption and this means that the concentration in plasma may continue to rise for many hours following a severe overdose.

A variety of measures can be taken to alleviate salicylate poisoning, which are aimed at decreasing the absorption of salicylate, increasing its rate of elimination and correcting the acid–base and electrolyte disturbances. These measures include gastric lavage for up to 24 h after ingestion as salicylate may remain unabsorbed in the GIT for long periods. Patients may also be given 50 g of activated charcoal followed by 25 g every 4 h. The charcoal binds salicylate and prevents its absorption. The ionization state of salicylate affects its reabsorption by the kidneys. If the provisional urine is acidic, salicylate is not ionized and is filtered at the glomerulus but reabsorbed from tubules ; if the urine is alkaline the salicylate is ionized and its tubular reabsorption is reduced and more salicylate is lost from body. Hence patients are infused with sodium hydrogen carbonate to increase the pH of urine and promote loss of salicylate. Fluid replacement and corrections of acid–base, electrolyte imbalance, especially the hypokalemia, and hypoglycemia are all required.

Hemodialysis may be necessary in severe cases of poisoning, such as when plasma concentrations of salicylate exceed 800 mg dm–3. As well as removing the salicylate, hemodialysis also corrects the acid–base and electrolyte imbalances. The technique requires a dialyzer (Figure 12.11). Blood from a patient’s artery is circulated through the dialyzer on one side of a semipermeable membrane while a solution of normal electrolytic composition circulates on the other side. Waste products, poisons, including salicylate, and small molecules cross the membrane and the dialyzed blood is returned to the body via a vein. 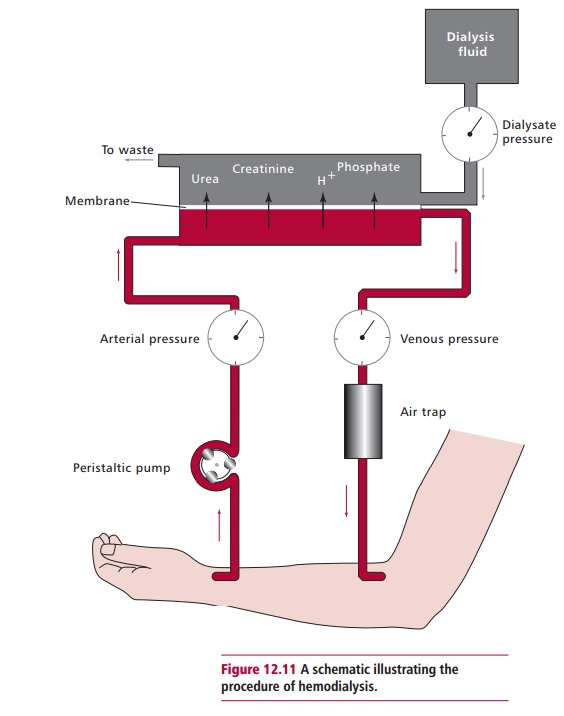