Barbiturates are a group of drugs based on the parent compound, barbituric acid.

Barbiturates are a group of drugs based on the parent compound, barbituric acid (Figure 12.17 (A)). All are sedatives, that is, they depress certain activities of the CNS. Although they have well-established therapeutic uses, barbiturates can be toxic if taken as an overdose, indeed, they are one of the commonest methods for attempting suicide. They were once used as recreational drugs, for example in purple hearts, and this too led to accidental overdoses. Barbiturates have now largely been replaced by benzodiazepines and barbiturate overdose is less likely to be encountered today. 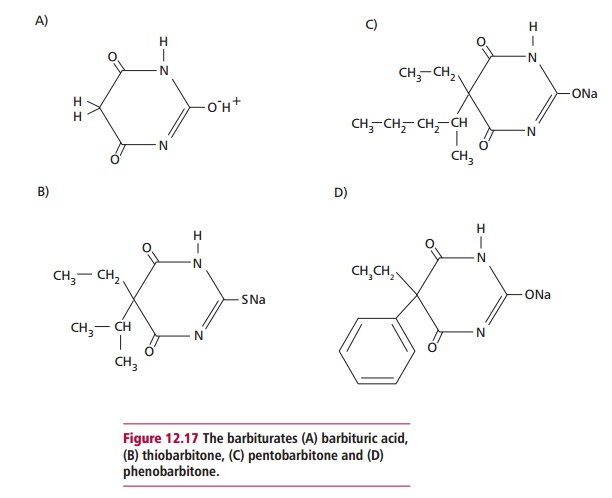 Barbiturates induce drug dependence and this involves three distinct and independent components: tolerance, physical dependence and compulsive abuse or psychic craving. Barbiturate dependence stimulates all three components to such an extent that they produce major problems for the individual user as well as for society at large. Once barbiturate dependence has developed, abrupt withdrawal from the drug induces a particularly unpleasant withdrawal syndrome. This is characterized by weakness, tremors, anxiety, increased respiratory and pulse rates with a corresponding increased blood pressure, vomiting, insomnia, loss of weight, convulsions of the grand mal type and a psychosis resembling alcoholic delirium tremens. Thus during withdrawal, it is appropriate to reduce the dosage gradually over an extended period.

The length of time barbiturates act in vivo varies. Some, for example thiobarbitone (Figure 12.17 (B)), are short acting, others, such as pentobarbitone (Figure 12.17 (C)), act in the medium term, while the group including the best known barbiturate, phenobarbitone (Figure 12.17 (D)), induce long-lasting effects. Barbiturates act by enhancing the effects of GABA by binding to a different site on the receptors on target neurons of the CNS to those for GABA itself. The blood–brain barrier (Figure 3.4) prevents the easy entry of many substances into the brain compared with their uptake into other tissues. However, lipid-soluble substances, such as the barbiturate thiopentone, enter the brain quickly by passive diffusion. This rapid uptake allows thiopentone to exert its anesthetic effects extremely quickly. In contrast, other barbiturates, such as phenobarbitone, are weak acids and so may be ionized. This slows their entry into the CNS but produces a longer lasting effect. The life-threatening effects of barbiturate poisoning include depression of the centers in the CNS that control respiration and blood

circulation. Some barbiturates, for example phenobarbitone, can also induce the synthesis of monooxygenase enzymes and so, by altering the rate or route of metabolism of other drugs, can alter their toxicities.

There is no antidote for barbiturate poisoning. Primary care is to maintain a free airway, administer artificial respiration if required and forced alkaline diuresis. The pH dependence of ionization of many common barbiturates is exploited by infusions of large volumes of sodium hydrogen carbonate containing the osmotic diuretics urea or mannitol. This increases the pH of plasma relative to the cytoplasm of cells and increases the proportion of ionized barbiturate in the plasma causing more of the un-ionized drug to diffuse out of the tissues, including the brain, into the plasma. This can promote a diuresis as large as 12 dm3 in 24 h. The ionized form is also excreted more rapidly since the alkalinity of the provisional urine ensures it remains ionized and cannot cross the tubule wall back into the plasma.