The alcohol ethylene glycol is a commonly used component of antifreeze, paints, polishes and cosmetics.

The alcohol ethylene glycol is a commonly used component of antifreeze, paints, polishes and cosmetics. It is a poison with a minimum lethal dose of approximately 100 cm3. The toxicity of ethylene glycol is due to its oxidation to oxalate, which humans cannot rapidly excrete. The oxidative steps produce excessive NADH resulting in lactate production (Figure 12.16). The oxalate and lactate can result in metabolic acidosis, while the organic acids produced by the breakdown of ethylene glycol inhibit a number of metabolic processes 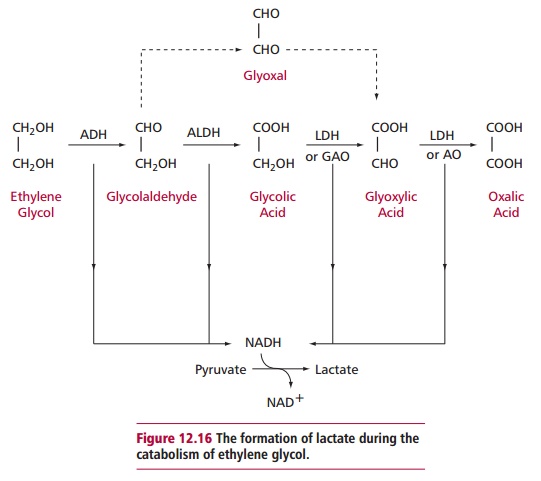 including oxidative phosphorylation. The production of oxalate also results in its deposition as insoluble calcium oxalate in renal tubules and the brain. These biochemical events reduce the concentrations of hydrogen carbonate and Ca2+, but increase that of K+ in plasma. Crystals, blood and protein may all leak into the urine, giving rise to three distinct clinical phases. Within 30 min to 12 h, intoxication, nausea, vomiting, coma, convulsions, nystagmus, papilloedema, depressed reflexes, myclonic jerks, tetanic contractions and permanent optic atrophy may occur. In 12 to 23 h tachypnea, tachycardia, hypertension, pulmonary edema and congestive cardiac failure may all present. In the following 24 to 72 h kidney damage with pain and acute renal tubular necrosis may feature. Death may occur within 24 h due to damage to the CNS, or between eight to 12 days due to renal failure.

Treatment of ethylene glycol poisoning is to apply gastric lavage to reduce its absorption, combined with supportive therapies for the shock and respiratory distress. Administration of ethanol is standard since it competes effectively for the active site on alcohol dehydrogenase, inhibiting the metabolism of the absorbed ethylene glycol. Sodium hydrogen carbonate, administered intravenously, and calcium gluconate are used to correct the acidosis and hypocalcemia respectively. Dialysis is also used to remove ethylene glycol.