Drugs are xenobiotics and may be defined as any substance, other than food, that affects a living process. Pharmacology is the study of the effects of drugs in the prevention, diagnosis, and treatment or cure of disease.

Drugs are xenobiotics and may be defined as any substance, other than food, that affects a living process. Pharmacology is the study of the effects of drugs in the prevention, diagnosis, and treatment or cure of disease. Such drugs are often referred to as medicines, which distinguishes them from other drugs that are used for pleasure, such as some narcotics. Pharmacotherapeutics is that branch of pharmacology concerned with the administration of drugs for prevention and treatment of disease.

Drugs can be classified according to their chemical structure but, more often, in terms of their pharmacological effects. For example, they can be divided into three groups: chemotherapeutic drugs, which are used to treat infectious diseases; pharmacodynamic drugs, such as sedatives that are used in the treatment of noninfectious diseases; and a number of miscellaneous agents including narcotics and analgesics.

Most drugs act on cells to alter a biological function. This pharmacological effect occurs as a consequence of the drug reacting with a receptor that controls a particular function, or because the drug alters a physiological mechanism which affects that function. For many drugs, the extent and duration of the pharmacological effect are proportional to the concentration of the drug at the receptor. The site at which the drug acts to produce a pharmacological effect is called its site of action. The mechanism of action of the drug is the biochemical or physiological process occurring at the site of action to produce the pharmacological effect. Drug receptors include enzymes and structural or transport proteins. However, some receptors are nonprotein that bind to the drug to form a complex which alters the permeability of the membranes or the transcription of DNA. Some drugs have a structure similar to endogenous molecules and compete with them for binding sites. Drugs may also act by preventing the formation, release, uptake or transport of key substances in the body or by forming complexes with molecules that can then activate receptors.

The binding of a drug to its receptor usually depends on relatively weak forces, such as van der Waals forces and hydrogen and ionic bonds and thus the formation of the drug–receptor complex that elicits the response is normally freely reversible. Hence the response to any drug is not permanent. 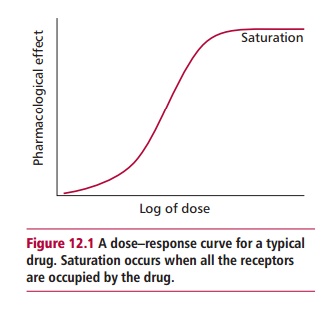 It is essential that a number of properties relating to a medicinal drug, for example its pharmacodynamics and pharmacokinetics, are first ascertained. Pharmacodynamics describes how the drug interacts with its target site and the biochemical and physiological processes that result in any therapeutic or toxic effects. Pharmacokinetics relates to the uptake, distribution, metabolism and excretion from the body.

Most drugs are given orally for convenience, although they can be administered intravenously, intramuscularly or subcutaneously. When given orally, the absorption of the drug depends on its ability to disassociate from its dosing form, dissolve in gastrointestinal fluids and diffuse across the gut wall into the blood. The rate and extent of drug absorption varies with the nature of the drug, the matrix in which it is dissolved and the region of the gastrointestinal tract (GIT) where it is absorbed. The proportion of the drug absorbed into the circulation is referred to as its bioavailability. For an orally delivered drug, this should generally be greater than 70% to be of therapeutic use. However, when the site of action is the GIT lumen itself, for example treating a GIT infection, then a low bioavailability would be advantageous.

A number of drugs undergo what is referred to as first pass metabolism. They are absorbed rapidly and completely by the GIT but, nevertheless, have low bioavailability because they are transported to the liver in the hepatic portal vein and metabolized and have not entered the systemic circulation. Drugs with delayed absorption are sometimes required and special slow or sustained release formulations have been developed for these cases. Such drugs can be taken orally at less frequent intervals. Certain diseases that affect the GIT and the interaction of some drugs and foods in the GIT can delay their absorption.

Following absorption, drug distribution occurs when the compound enters the vascular system. The physical, chemical and molecular properties of the drug can influence its distribution. Its distribution may also be influenced by its binding to blood components and receptors and its ability to dissolve in lipids and pass through biological membranes. Many drugs bind to plasma proteins and often an equilibrium is established between protein-bound and free drug. Only the free fraction is able to interact with receptors or cross cellular membranes. Any factor that changes drug– protein interactions may alter the distribution, pharmacological effects and excretion of the drug.

Drugs are excreted from the body by the biliary, GIT, pulmonary and/ or renal routes. Most drugs are excreted through the renal system, and therefore, alterations in renal function may influence the half-life and serum concentration of the drug. A decline in renal function causes an increase in the serum drug concentration with an associated increased pharmacological effect.
Study Material, Lecturing Notes, Assignment, Reference, Wiki description explanation, brief detail
Biology of Disease: Toxicology : Drug Action, Metabolism, Distribution and Excretion |