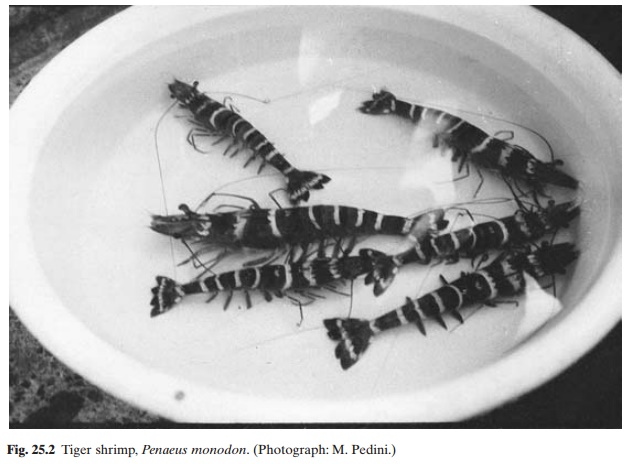 Attention has so far been directed to the culture of tropical and sub-tropical species of shrimps, and the so-called giant fresh-water prawn, Macrobrachium rosenbergii.

Attention has so far been directed to the culture of tropical and sub-tropical species of shrimps, and the so-called giant fresh-water prawn, Macrobrachium rosenbergii. Spawning and larval rearing of the kuruma shrimp in captivity in Japan in the 1950s aroused considerable interest in intensive farming of shrimps and this species became the focus of attention for a number of years. It was introduced in many countries in Asia, southern Europe, West Africa, the southern USA and Central and South America. Very soon, attention turned to some of the larger local species of shrimps, which were better adapted to prevailing temperature conditions, and the larvae and juveniles of which were readily available to supplement inadequate production from hatcheries. In Asia, the more important species are the tiger shrimp P. monodon and the Indian or white shrimp P. indicus. The banana shrimp P.merguiensis, the green tiger or bear shrimp P. semisulcatus and the oriental shrimp P. orientalis (= chinensis) are also of commercial interest in some countries of the region. The redtailed shrimp P. penicillatus is a species cultured in Taiwan. Metapenaeus monoceros, M.brevicornis and M. ensis form subsidiary speciesin shrimp farms in several Asian countries.

Besides the imported P. japonicus, the main interest in the Mediterranean countries of Europe has been in the local Mediterranean shrimp (triple-grooved shrimp) P. kerathurus.

Present efforts in establishing shrimp farming in Africa have mainly involved the culture of P. indicus on the East Coast and P. notialis onthe West Coast. The most important species in Central and South America are the white-leg shrimp or camaron langostino P. vannamei and the blue shrimp P. stylirostris. Besides the blue shrimp, there are at least four species that have reached commercial-level culture in the countries bordering the Atlantic Coast of Central and South America, namely the brown shrimp P. aztecus, pink shrimp P. duorarum and P. setiferus, known as the common or whiteshrimp.

As well as these, production on an experimental scale has been undertaken for the southern white shrimp P. schmitti. Though all the above species are of potential importance in commercial shrimp farming, and several others are being investigated for their suitability, the bulk of the present production comes from P. monodon, P. chinensis, P. vannamei, P. merguiensis, P. japonicus and P. indicus. Production estimates for crustaceans for the year 2000 totalled 1.647 million tons. Production of P. monodon was the highest (571000 tons), followed P. chinensis (219000 tons) and P. vannamei (144000 tons) (see Table 25.1).

Much of the research effort on shrimp culture has been concentrated on the development of hatchery techniques for controlled spawning and larval rearing, as in the case of other marine aquaculture species. In the early years of investigations, considerable problems were faced in rearing and feeding the hatchlings through the different stages of development and obtaining reasonable survival rates.

The search for species that may be easier to reproduce and have a shorter larval history resulted in investigations on the giant fresh-water prawn, Macrobrachium rosenbergii. The success achieved in the mass production of post-larvae of this species in the 1970s led to widespread interest in its culture, and it has been imported into an impressive number of countries in the tropical, sub-tropical and even temperate climates, in almost every continent.

World production of M. rosenbergii increased from 26588 tons in 1991 to 118501 tons in 2000 (FAO, 2002). China, which is the world’s lead producer now, produced 97420 tons in 2000, accounting for 8 per cent of would production. But China began freshwater prawn culture only in 1996, even though Taiwan(China) with a production of 16196 tons was the lead producer in 1991. Thailand is the other major player in prawn culture but its annual production, which peaked at 10305 tons in 1992, had come down to 3700 tons in 2000, apparently owing to the Thai preference for marine shrimp farming, which is due in part to the easier technology in breeding and rearing and consumer preference for the shrimp.

Though there are considerable similarities in the culture technologies for the various species, there are also a number of differences brought about by environmental requirements, breeding and feeding behaviour, and compatibility with other species. Within the general requirements of water salinity (10–40ppt), temperature tolerance (18–33°C), the character of soil substrates in the culture facilities, feed quality and response to high-density culture, Penaeid shrimps have specific requirements and limitations. Growth rates and harvest sizes (based on the commercial size of 10–45g weight) also vary considerably.These factors greatly influence the compatibility of different species of Penaeids in polyculture, but can be advantageously used in rotational production of different species in the same facility, in accordance with seasonal changes of salinity and temperature. In temperate climates, different species can be used for culture in summer and winter. In tropical monsoon areas subject to marked changes of

salinity, the production of a species preferring low salinity can be alternated with one that requires high-salinity water. The short duration of culture periods makes such rotation very feasible in many areas.

The fresh-water prawn M. rosenbergii is commercially important because of its size, as well as its eating qualities.The males can attain a size of about 25cm and the females about 15cm. Though adults are found in fresh- and brackish-water areas, the species requires water of about 12ppt salinity for larval rearing. This requirement has created problems in siting hatcheries near grow-out facilities, but it has now been shown that this can be overcome by the use of sea water or brine trucked in from the nearest

source, as performed by operators of small back-yard hatcheries in Thailand, or by the use of artificial sea water as in a commercial farm in Zimbabwe. The adults are omnivorous and feed on a variety of foods of animal and vegetable origin.

Among the species so far studied, P. japonicus (fig. 25.1). P. orientalis and P. setiferus areconsidered to be most suited for production in temperate climates. Penaeus japonicus is cultured in Japan, Taiwan and in a less intensive way in Brazil, France, Spain and Italy. Penaeusorientalis is cultured in Korea and China. Penaeus setiferus is the species of interest in thetemperate regions of the USA. Much of the available knowledge on modern shrimp culture 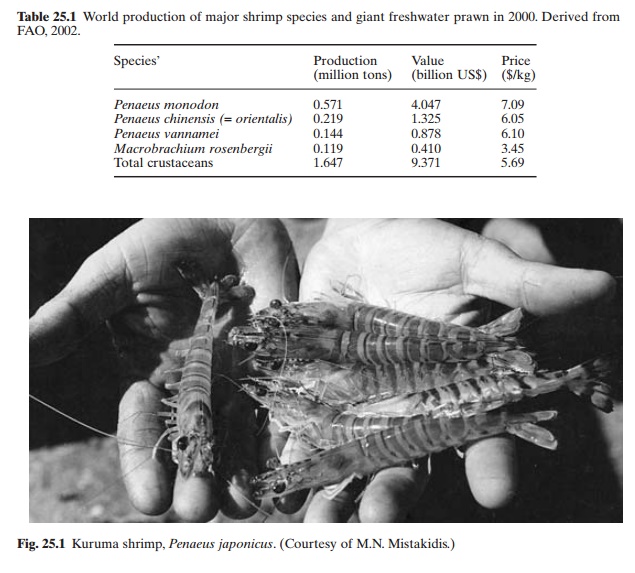 originated with intensive studies on P. japonicus. It is a hardy species, but cannot tolerate lowsalinity or high temperatures. It requires diets containing about 60 per cent protein for satisfactory growth and grow-out ponds or tanks should have a sandy bottom. 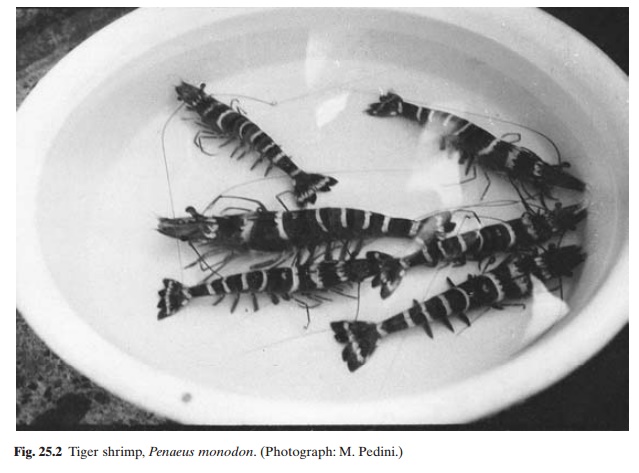 The tiger shrimp P. monodon (fig. 25.2), is the fastest growing species used in aquaculture in Asia. The species is euryhaline and can tolerate almost fresh-water conditions, even though 10–25ppt is considered optimum. It cannot tolerate temperatures below 12°C and the upper limit of tolerance is around 37.5°C.

Penaeus indicus and P. merguiensis (figs 25.3and 25.4) have very similar habits in many respects, but in aquaculture the former species exhibits a preference for sandy substrates and the latter for muddy ones. Both species require high salinities (20–30ppt) for good growth and cannot tolerate salinities outside the range 5– 40ppt. The lethal temperature is above 34°C. Under the current pond management systems, the duration of culture cannot exceed three months, as heavy mortalities occur after that period. 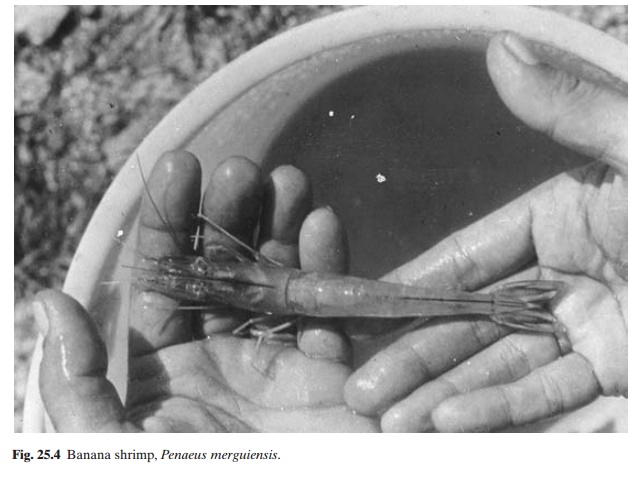 Metapenaeus monoceros and M. brevicornis areknown to breed in ponds. They are tolerant of low salinities and high temperatures and can therefore be cultured in a wider variety of sites. Harvestable size is attained in a shorter time of two to three months, and survival rates are high. But their final size is smaller, generally about 14cm for M. monoceros and M. ensis and 7.5– 12.5cm for M. brevicornis.

Penaeus semisulcatus (fig. 25.5) grows to alarge size and fetches a good price in the markets in Asia and the Middle East, but it requires high salinities and its growth in ponds is slow. Though easy to propagate, survival rates in grow-out facilities are reported to be very 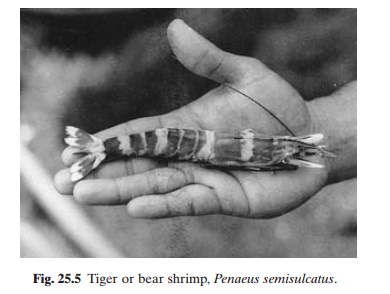 low. Among the shrimps cultured in Central and South America, P. vannamei (fig. 25.6) is highly euryhaline and can withstand salinities ranging from 0 to 50ppt and temperatures ranging from 22 to 32°C. Low salinities and warmer temperatures are characteristic of the rainy season (December to April) in countries like Ecuador and higher salinities and cooler temperatures prevail during the remaining months. This partly accounts for the higher survival rate of P. vannamei compared to P.stylirostris, and its preference in pond farmingin these countries. 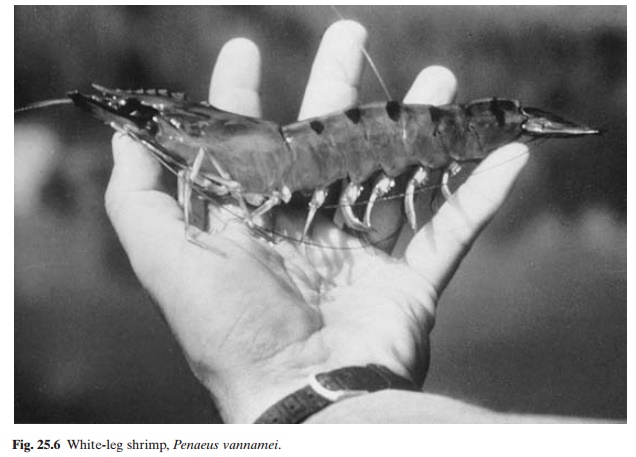