Spawning and larval rearing are generally carried out in tanks made of cement concrete, ferrocement, fibreglass, plastic, etc..

Spawning and larval rearing are generally carried out in tanks made of cement concrete, ferrocement, fibreglass, plastic, etc. (fig. 24.8). Maturation cages and pens have been used on an experimental basis, but are 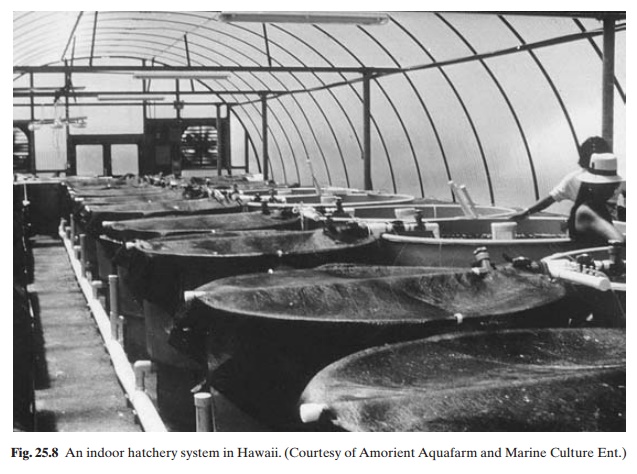 seldom used on a commercial scale. The hatchery tanks used for spawning and larval rearing in Japan are large, ranging from 100 up to 2000 ton capacity. They are suitable for spawning a large number of spawners at a time and for rearing the resultant hatchlings by what is referred to as the ‘community culture method’ (see fig. 6.38). Larval foods are raised by fertilizing the tanks directly every day, producing diatoms and zooplankton, which form the food of larval shrimps. Spawning, larval rearing and fry nursing are all done in the same tank. 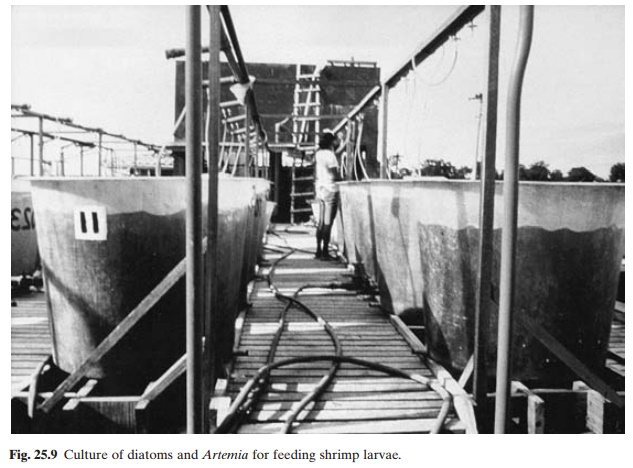 Many new hatcheries follow a different system, developed in the USA (Galveston, Texas), in which separate smaller tanks made of fiberglass or plastic are used for spawning and larval rearing. Facilities for culture of live food are maintained separately (fig. 25.9). Larval rearing tanks vary in capacity from 1000 to 2000l and the spawning tanks from 100 to 250l. As high densities of larvae (200–300 nauplii/l) are reared, they cannot be grown beyond the early post-larval stages (for about five days) in the original tanks and further rearing has to be done in nursery tanks or ponds, before grow-out. This type of hatchery system seems to be better suited for species like P. monodon, where the availability of spawnersis very much limited and so community culture may not prove efficient. 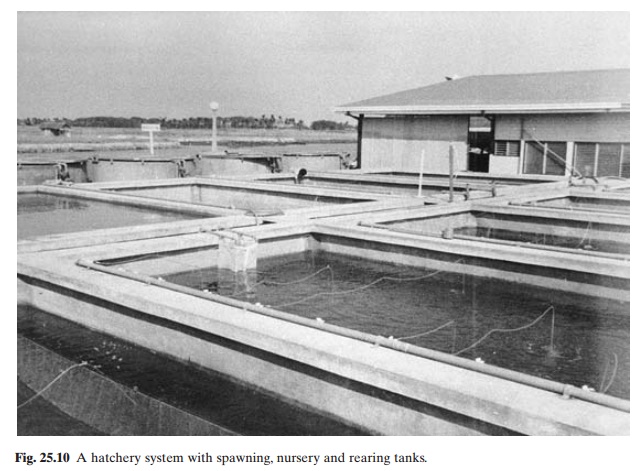 Kungvankij (1982) described a third system, which combines the advantages of the above two systems. It includes spawning tanks with capacities of 1000–2000l, larval rearing tanks of 1000–3000l capacity and nursery tanks with a capacity of 30–100 tons for rearing post-larvae to the P30 stage (fig. 25.10). This system is reported to maximize tank utilization in spawning and larval rearing of species like P.monodon

Liao (1985) referred to a recently developed ‘ladder system’ hatchery (fig. 25.11), consisting of four interconnected tanks built on sloping ground, with the algal culture tank at the top, followed below by the rearing tank for nauplii and zoea larvae, then another rearing tank for mysis to the P1–5 stages and finally a larger tank for post-larvae, all built one below the other, with descending water levels.