As stated earlier, pond culture is the most common grow-out system, and extensive culture methods are gradually giving way to semi-intensive production, in both Asia and South America.

As stated earlier, pond culture is the most common grow-out system, and extensive culture methods are gradually giving way to semi-intensive production, in both Asia and South America. The traditional coastal shrimp ponds of Asia, which were stocked with wild seed stock that gains entrance during tidal water exchange, are now being stocked with sorted fry collected from the wild or bought from fry collectors. The stocking rate is still at a low level of 3000–5000fry/ha. During the rearing period of about two months, water exchange is maintained using tidal flow. In improved systems, the ponds are carefully prepared before stocking.

The extensive system of rice field culture of shrimps in India has also undergone some changes, such as the introduction of controlled stocking of fry and enhanced production of food organisms through better water management and manuring by rice stubble. Production may now reach 400kg/ha per crop under very favourable conditions, but on an average it is around 200kg/ha per crop. 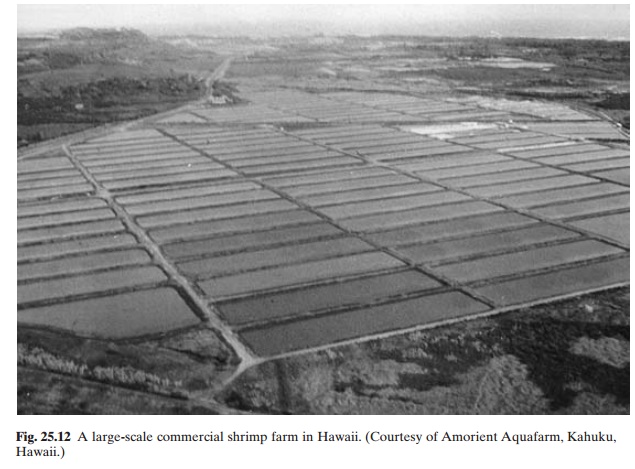 Modern large-scale shrimp farming is carried out in specially designed pond farms (figs 25.12 and 25.13) following mainly semi-intensive forms of culture, which have generally proved to be more economical. Such farms usually have a hatchery and nursery and rearing ponds. Some pond layouts also include a set of transition ponds, to enable the progression method of culture, involving transfer of stocks from one pond to another as the food resources decrease and the biomass increases. The sluice gates are so located as to create a good circulation with the incoming water. The ponds are usually rectangular and about 1–3ha in area, with a depth of 0.8–1.2m. Ponds in Central and South American shrimp farms are sometimes larger, up to 20ha in area. Stocking rates vary considerably between 28000 and 50000fry/ha. Natural food is produced by fertilization as mentioned above, and supplementary feeding with either fresh feedstuffs or formulated feeds is performed from one to five times daily. Feed rations vary between farms, but generally decrease from 25 per cent in the early juvenile stage to 2–4 per cent before harvest. Some farms in South America do not fertilize the ponds either at the nursery or production stage, and depend entirely on artificial feeding. Japanese shrimp culture has depended very considerably on feeding with the short-necked clam (Ruditapes (= Venerupis) philippinarum) and the mussel (Mytilus edulis). Formulated moist and dry feeds are also used very widely. 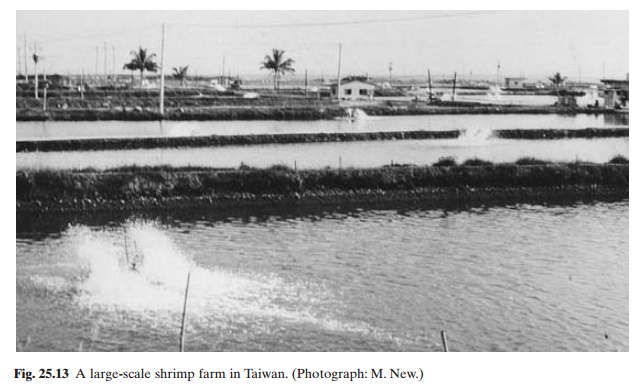 Many farms, particularly those in Central and South America, use diesel pumps to supply water. Farms in Thailand often use ‘push pumps’. Though pumping increases the cost of production, regular water exchange and maintenance of good water quality are greatly facilitated. A large water exchange is required in culture ponds from time to time to accelerate and synchronize the moulting cycle of the stock. Yields in this type of culture can be 1.5– 2 tons/ha per crop.

Intensive types of culture generally utilize cement tanks, although smaller earthen ponds of 0.5–1ha size and 60–150cm depth are also used. Inlets and outlets are arranged in such a way as to effect proper water circulation. Many pond farm designs have a drainage system radiating to a central outlet with a harvest basin.

Tanks are generally provided with substrates. Aeration equipment like paddle wheels and air blowers are provided, especially in larger pond systems (fig. 25.14). Stocking densities ranging from 200 to 250 fry/m2 are common. High-protein formulated diets are fed daily and frequent exchange of water is ensured. The yield from a 1000 ton tank is reported to be about 1.5–3 tons per crop, and in special ponds up to 28 tons/ha per year. However, very intensive culture using high stocking densities and heavy feeding can sometimes result in serious environmental and health problems, leading to large-scale mortalities, as has happened in Taiwan. 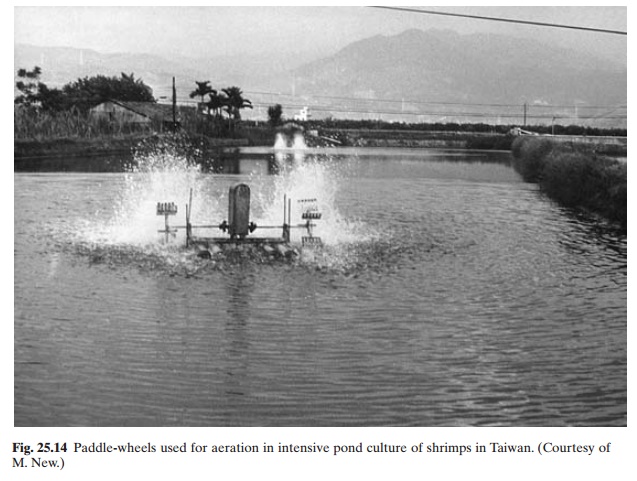 Pen culture of shrimps is practised in Japan and has also been carried out on an experimental scale elsewhere, such as in lagoons in southern India. Suitable intertidal areas are enclosed by net fencing. Japanese pens are made of vertical walls of concrete, constructed to a height of about 1m for holding water during low tide, with a wooden frame with nylon netting set on top of the concrete wall to prevent the escape of shrimps and to facilitate water exchange during high tide (Kungvankij, 1985). In certain respects these pens resemble tidal ponds and the area enclosed may extend to 10000m2 with a depth of 1–1.5m. The stocking rate is between 20 and 30 per m2. The average production is reported to be about 3–4 tons/ha per year. In ordinary net enclosures tried elsewhere, the production has seldom reached that level.

In spite of the general belief that polyculture yields higher production, most shrimp culturists seem to prefer monoculture of the fastest growing species available, and they resort to polyculture with other shrimp species mainly because of the shortage of seed stock of the preferred species, as for example P. monodon in Asia. Even polyculture with milkfish as practised in some Philippine farms is usually due to the scarcity of shrimp fry or because of market demands. It is claimed that polyculture of P. vannamei and P. stylirostris is beneficial and,if stocked in the ratio of 2:1 respectively, the harvest can be more than doubled. But it is known that P. stylirostris will not grow well if stocked at high densities, and the stocking rate should not be more than two per m2, whereas P. vannamei can be stocked at the rate of fourto five per m2. However, behavioural disparities and the differences in salinity and substrate preferences, as well as temperature and feed requirements, can more effectively be made use of by rotating species to ensure continuous use of rearing facilities and an overall increase in yields and income, but sustainable system development also needs paramount consideration. From an economic point of view, monoculture has been shown to be more profitable, mainly because of the higher market price of shrimps. According to Shang (1983) the average gross revenue per unit area of monoculture farms growing tiger shrimps is about double that of polyculture farms growing the same shrimps together with milkfish and crabs.