There are very few reports on cost and earnings of fresh-water prawn culture, and the available estimates are not recent.

There are very few reports on cost and earnings of fresh-water prawn culture, and the available estimates are not recent. The profitability of small-scale prawn farming, like that practised by many farmers in Thailand, is never in doubt as this is often the main source of income for the families, and incomes have shown signs of significant increases. The economic performance of large-scale commercial farms appears to vary widely, and there are cases of notable successes and complete failures. Some of the commercial hatcheries and farms have changed hands more than once. In the major Macro-brachium farming areas, there does not appearto be any lack of demand for the product since the production is still relatively small (4000 tons in Thailand, 136 tons in Hawaii, 3500 tons in Taiwan). But there is considerable variation between these areas in initial investment and production costs, depending on local conditions, which affects the profitability of the operations. 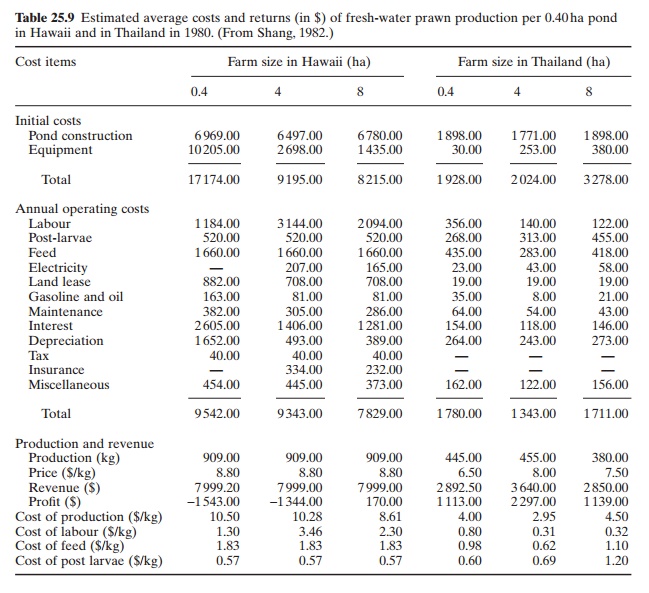 Shang (1982) compared the average costs and returns of different sized prawn farms in Hawaii and Thailand, based on data collected under a UNDP/FAO aid project in Thailand (see Table 25.9). The data clearly show that the initial costs in starting a farm in Hawaii are2.5–8.9 times higher than in Thailand. Similarly, the annual operating cost is about 5.6 times higher than in Thailand, even though farmers obtained post-larvae at subsidized prices. The cost of production per kg of prawn is much higher in Hawaii (2.3–2.9 times), even though the yield per ha is more than double. Obviously the cost of inputs in Thailand is lower. As the selling price of prawns is not very different, the profit derived by farmers in Thailand (for all sizes of farms) is much higher.

Shang’s data seem to suggest that under the conditions in Hawaii, only larger farms can be profitable, whereas large farms (more than 4ha in area) are less profitable in Thailand. Though it is not possible to make definite conclusions

from this, the likely differences in economic performance in relation to farm size and input levels (represented by intensity of farming), should be taken into consideration when large-scale farms are planned in developing countries.More recent information on the economics of freshwater prawn culture in different countries is given in Rhodes (2000).