Even though reliable economic data on actual commercial production continue to be scarce, as in most other aquaculture systems.

Even though reliable economic data on actual commercial production continue to be scarce, as in most other aquaculture systems, greater efforts have been made to assess the economic viability of shrimp farming, because of the investment interests of industries and the somewhat indifferent results of some early ventures. Comparisons and conclusions are made difficult by the wide variations in culture procedures, the climatic conditions of the farming areas and the shrimp species which are used for farming. Hirasawa (1985) analysed in detail the economics of shrimp culture in Asia, based on the type of production system, investment costs and the present and expected future markets. Griffin et al. (1985) discussed the investment and production costs of a semi-intensive farm in the USA and compared it with a similar farm in Ecuador. Shang (1983) made a general survey of shrimp farming in Asian countries, the USA and Ecuador. All these studies have confirmed the wide variability of investment and production costs in different areas.

Table 25.2 illustrates the variation in costs and returns in selected countries. Though the average rate of return on operating costs ranges from 11 to 118 per cent, all the farms surveyed were found to be profitable and the lowest returns were from areas where labour costs, capital investments and management costs were high. This is further confirmed by the comparison of estimated costs and returns of similarsized farms rearing P. vannamei in the USA and Ecuador (Griffin et al., 1985) (Table 25.3). The internal rate of return from a 200ha farm in Ecuador was found to be 2.8 times that of a similar one in the USA. 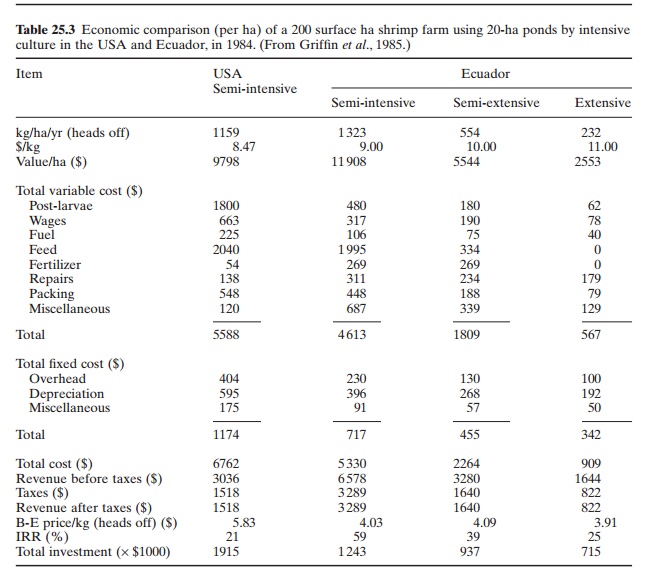 Investment costs are comparatively high in the USA, where land costs range from $1500–8000/ha and pond construction cost is about 40 per cent of the total investment of about $2 million. The growing season is shorter and only one crop is produced. Feed accounts for 36 per cent and labour and harvesting for 22 per cent of the variable costs.

Hirasawa’s analysis (1985) of shrimp farming shows that the best return on investment is obtained by the use of extensive culture methods in Asia. By a small increase in productivity the relative cost of production can be reduced significantly in extensive systems and this ensures the survival of the farm, even if the market price of shrimp goes down.This may not be possible for intensive systems, as the ratio of variable costs to total costs is rather high and the variable costs do not change as the productivity increases. This is probably the rationale behind the prevailing interest in semiintensive systems which also respond to the need for increased production of shrimps to meet the requirements of export markets.