Liability for Supervising Other Professionals

Psychiatrists work in a variety of settings and interact in many different ways with other mental health professionals.

Liability for Supervising Other Professionals

Psychiatrists work in a variety of settings and interact in many different ways with other mental health professionals. One as-pect of this interaction is the liability potential that psychiatrists undertake in each of these relationships. The APA publication entitled “Guidelines for psychiatrists in consultative, supervi-sory, or collaborative relationships with nonmedical therapists’’ (1980) outlines the typical consultative relationships and their corresponding degree of responsibility. Broadly, the degree of li-ability correlates with the extent of authority to make (as opposed to recommend) treatment decisions (Table 6.6). 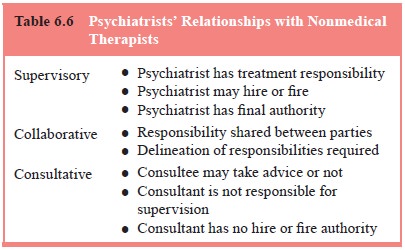 In a supervisory relationship the psychiatrist retains direct re-sponsibility for patient care and gives professional direction and active guidance to the therapist. In this relationship the non-medical therapist may be an employee of an organized health care setting or of the psychiatrist. The psychiatrist remains ethi-cally and medically responsible for the patient’s care as long as the treatment continues under his or her supervision. The pa-tient should be fully informed of the existence and nature of, and any changes in, the supervisory relationship.

Consultative relationships are different in terms of the level of responsibility and liability undertaken. Consultative ad-vice is given on a “take it or leave it’’ basis. Consultants are out-side the decision-making chain of command; they do not make treatment decisions, and do not have hiring and firing authority. As such, they generally are not held liable for treatment deci-sions (though psychiatrists practicing as consultants should be aware of any unusual legal provisions in the state in which they practice). The American Psychiatric Association (1980) guide-lines state that in this type of relationship the psychiatrist does not assume responsibility for the patient’s care. The psychiatrist evaluates the information provided by the therapist and offers a medical opinion which the therapist may or may not accept. Con-sultation is not a one-way process and psychiatrists do and should seek appropriate consultation from members of other disciplines in order to provide more comprehensive services to patients.

There is consensus among risk management experts that various strategies can reduce medico–legal liability. The clinical strate-gies of obtaining consultation on difficult cases, documenting the rationale behind critical decisions, and using informed consent to build rapport are valuable risk management techniques. In docu-mentation, “thinking for the record’’ is advocated by Gutheil. The psychiatrist thus demonstrates the use of judgment and ongoing risk benefit assessments. Institutional strategies include regular quality assurance monitoring, training in documentation, a sys-tem for working with patients and families on adverse effects, and providing access to expert consultation.

In psychiatry, several areas deserve special mention. Sui-cide and attempted suicide represent one of the most common and expensive sources of lawsuits in psychiatry (Slawson, 1989). Psychiatrists should assess the level of suicidality and the ability of patients to monitor and report their suicidality (Gutheil et al., 1986) and plan an appropriate strategy based on that assessment. In lawsuits involving suicide, the patients are more commonly portrayed as the victims, rather than agents in their own deaths. The psychiatrist who both fosters and documents active col-laboration with the patient demonstrates good risk management practice as well as clinical skill. Prescribing medications also raises psychiatrists’ liability risk. Solid documentation of his-tory, examinations, laboratory tests, indications for a medication and risk assessment are essential to reduce liability. Consultation with a colleague should be sought for difficult cases.

Duty to Warn, Duty to Protect

When a psychotherapist determines (or, pursuant to the stand-ards of the profession, should determine) that his/her patient represents a serious danger of violence to another, he/she incurs an obligation to use reasonable care to protect the intended vic-tim against such danger. The discharge of such duty, depending on the nature of the case, may call for the therapist to warn the intended victim or others likely to appraise the victim of the danger, to notify the police, or to take whatever other steps are reasonably necessary under the circumstances.

This is the so-called Tarasoff principle, established by California Judge Tobrinen in 1976 in the case of Tarasoff v. Regents (1976). It has generated controversy, spawned lawsuits, and initiated a fundamental reexamination of the psychiatrist’s role vis-à-vis members of the public.

The Tarasoff case involved the tragic death of a Univer-sity of California student, Tatiana Tarasoff, who was murdered by a fellow student, Prosenjit Poddar. Poddar was an outpatient at the campus mental health clinic. He stated to his psycholo-gist that he intended to kill Tarasoff. The therapist completedpaperwork to have Poddar committed for 72-hour emergency psychiatric detention. The local police detained Poddar, but re-leased him when he stated that he would “stay away from that girl’’. Two months later he successfully carried out his threat to kill Tarasoff.

This case, as well as subsequent cases and legislation in other states, created new clinical and ethical dilemmas for psy-chiatrists, as they now must balance confidentiality with the safety of third parties in outpatient settings as well. At what point is the inherently trusting nature of the psychiatrist–patient relationship impaired by the legally driven obligation to report threats of harm? When should a psychiatrist report a patient’s vague statement wishing to harm a third party? How should the patient’s violent history be weighed in the assessment of whether to violate confidentiality? Does the circle of responsibility in-clude only named third parties, or does it extend to groups of reasonably identifiable potential victims? Is a warning sufficient? Although these questions are ultimately matters of clinical judg-ment, psychiatrists need to know whether their states have estab-lished specific guidelines for settling them.