The genus Klebsiella belongs to the tribe Klebsielleae in the family Enterobacteriaceae.

The genus Klebsiella belongs to the tribe Klebsielleae in the family Enterobacteriaceae. The bacteria are named after Edwin Klebs, who demonstrated the bacteria for the first time. Members of the genus Klebsiella are Gram-negative, rod-shaped, nonmotile bacteria, with a prominent polysaccharide capsule. The classification of Klebsiella has undergone various modifications. Earlier, the genusKlebsiella, based on biochemi-cal reactions, was classified into three main species. Currently, based on DNA homology, they have been divided into seven species, namely: (a) Klebsiella pneumoniae, (b) Klebsiella ozaenae, (c)Klebsiella rhinoscleromatis, (d) Klebsiella oxytoca, (e) Klebsiellaplanticola, (f) Klebsiella terrigena, and (g) Klebsiella ornithinolytica.

In recent years, Klebsielleae organisms are emerging as important agents of nosocomial infections. K. pneumoniae is the most important species of the group to cause infections in humans. K. oxytoca and K. rhinoscleromatis have also been occa-sionally associated with human infections.

K. pneumoniae, also known as Friedlander’s bacillus, was first iso-lated by Friedlander in 1883, from fatal cases of pneumonia. K. pneumoniae are Gram-negative, short and straight rods mea-suring about 1–2 0.5–0.8 m in size. They are nonmotile and nonsporing. They are arranged singly or in pairs. Freshly iso-lated strains show a well-defined polysaccharide capsule. The capsule is often prominent and can be made out even in Gram-stained smears as haloes around the bacilli, and is produced well when grown in media enriched with carbohydrates. The capsule can also be demonstrated by India ink preparation and Quellung’s reaction. Accumulation of extracellular polysaccha-rides as a loose slime gives mucoid appearance to Klebsiella colo-nies. They are fimbriated, and most strains possess one or more of three types of fimbriae: types 1, 3, and 6. They are nonmotile and nonsporing. They are lactose-fermenting, urease-positive, and indole-negative organisms; however, some strains of K. pneumoniae and K. oxytoca are exceptions. They do not pro-duce hydrogen sulphide, and they are both VP and MR tests positive. They grow well on ordinary media, such as nutri-ent agar and MacConkey agar at 37°C, forming large, dome-shaped, mucoid colonies. They produce lactose-fermenting red colonies on MacConkey agar. Klebsiella possesses 77 cap-sular polysaccharides (K antigens) and 8 somatic LPSs (O antigens). The members of Klebsielleae have been classified into over 80 serotypes based on the capsular K antigens and somatic O antigens. All serotypes are of the same virulence. Klebsielleae consists of invasive bacteria. They possess many virulence factors:

1.        Capsule is the main virulence factor. The capsule pre-vents the bacteria from phagocytosis by polymorpho-nuclear granulocytes. The capsule also prevents bacterial death caused by bactericidal serum factors by inhibiting the activation or uptake of complement components, especially C3b.

2.        Multiple adhesins are other virulence factors. Theseadhesins help the bacteria to adhere to host cells, which is crucial to initiate the disease process.

3.        LPS is another factor that prevents membrane damageand death of bacteria. The LPS of the bacteria activates the complement, which causes selective deposition of C3b onto LPS molecules at sites away from cell membrane of the bacteria. This inhibits the formation of the membrane attack complex (C5b–C9), which is responsible for cell death of the bacteria.

Klebsielleae organisms cause a variety of clinical syndromes in humans. These are (a) community-acquired pneumonia, (b) UTI, (c) nosocomial infection, and (d) bacteremia and sepsis.

1.        Community-acquired pneumonia is a very serious con-dition with a rapid onset and often fatal outcome despite early and appropriate antimicrobial treatment. Lobar pneumonia characteristically is associated with massive mucoid inflammatory exudate of lobar or lobular distribu-tion, involving one or more lobes of the lung. Necrosis and abscess formation are more frequent than in pneumococ-cal pneumonia. K. pneumoniae serotypes 1, 2, and 3 are usu-ally associated with the condition. Patients present with an acute onset of high fever and chills, flu-like symptoms, and productive cough with abundant, thick, tenacious, and blood-tinged sputum. Blood culture is positive in about 25% of the cases.

4.        Klebsiella bacteremia and sepsisproduce clinical manifes-tations similar to those caused by E. coli and other Gram-negative enteric organisms. In neonatal units, outbreaks of infection caused by extended-spectrum beta-lactamase (ESBL)-producingKlebsiella strains present a more serious problem and may be associated with high mortality.

ESBL strains of Klebsiella show the following features: (a) these are highly virulent, (b) they possess capsular type K55 antigen, and (c) they have an extraordinary ability to spread.

Diagnosis of K. pneumoniae infection is made by isolation of bacteria from clinical specimens obtained from possible sites (e.g., wounds, peripheral or central intravenous access sites, urinary catheters, respiratory support equipment) and by culture (Fig. 31-4, Color Photo 32). Klebsiella organisms may also be isolated from urine, blood, pleural fluid, and wounds. Serological tests are not useful for the detection of infection with K. pneumoniae.

The choice of a specific antimicrobial agent depends on antibiotics susceptibility patterns of isolated strains. A wide range of beta-lactams, aminoglycosides, quinolones, and other antibiotics are useful for treatment of Klebsiella infec-tions. Cephalosporins are widely used as monotherapy and in combination with aminoglycosides. Cephalosporins are not used for ESBL strains of K. pneumoniae. The carbapenems, especially imipenem, are effective against such ESBL strains. Aztreonam and quinolones are recommended for patients allergic to penicillin.

Hand washing holds the key to prevent transmission from patient to patient via medical personnel. Contact isolation is useful for patients colonized or infected with highly antibiotic-resistant Klebsiella strains, such as ESBL-K. pneumoniae.

Rhinoscleroma caused by K. rhinoscleromatis is a chronic inflammatory disease involving the nasopharynx. Infection with K. rhinoscleromatis has a worldwide distribution and is usually observed in areas of southeastern Europe, Central America, and India. Patients present with a purulent nasal discharge with formation of crusts and nodules that may lead to respiratory obstruction. The bacilli are seen intracellularly in lesions, which can be isolated and identified by biochemi-cal reactions. Diagnosis is by positive blood culture supple-mented with histology. Rifampin has been used for treatment of rhinoscleroma.

Ozena, caused by K. ozaenae, is a chronic atrophic rhinitis characterized by necrosis of nasal mucosa and mucopuru-lent nasal discharge. It often occurs in elderly persons. Nasal congestion and a constant nasal bad smell are the common symptoms. However, unlike rhinoscleroma, nasal conges-tion is not a prominent feature. Patients may also complain of headache and symptoms attributable to chronic sinus-itis. Identification of K. ozaenae is difficult due to wide variations in the biochemical reactions of isolated strains. Trimethoprim and sulfamethoxazole are used for treatment of ozena.

K. oxytoca may be rarely isolated from clinical specimens.It is being increasingly isolated from patients with neo-natal septicemia. The bacteria have also been associated with neonatal bacteremia, especially among premature infants and in neonatal intensive care units. The biochemi-cal reactions of different Klebsiella species are summarized in Table 31-9. 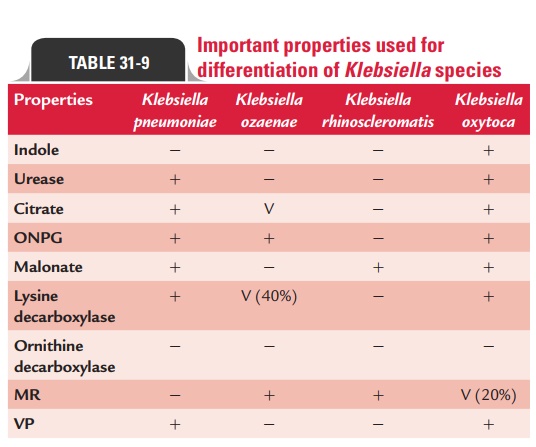