Escherichia coli: Properties of the Bacteria

E. coli has been recognized as harmless commensal and also asa versatile pathogen. E. coli in humans causes a broad spectrum of diseases.

E. coli has been recognized as harmless commensal and also asa versatile pathogen. E. coli in humans causes a broad spectrum of diseases. It is an important cause of enteric illness, urinary tract infection (UTI), neonatal sepsis, and neonatal meningitis. Hemolytic uremic syndrome (HUS) is a serious complication of enteric infection with certain E. coli strains.

·      The bacilli are arranged singly or in pairs.

·      They are motile due to the presence of peritrichous flagella.

·      Some strains are nonmotile. Some strains of E. coli may be fimbriated. The fimbriae are of type I (hemagglutinating and mannose-sensitive) and are present in both motile and nonmotile strains.

·            Some strains of E. coli isolated from extraintestinal infections possesses polysaccharide capsule. They do not form any spores.

E. coli is an aerobe and a facultative anaerobe. It grows at a tem-perature range of 10–40°C (optimum 37°C) and a pH of 7.2. The bacteria grow on a wide range of media including Mueller– Hinton agar, nutrient agar, blood agar, and MacConkey agar. Primary isolation can be made on nutrient agar and blood agar.

Nutrient agar: E. colion nutrient agar after 18 hours ofincubation at 37°C produces large, circular, low convex, grayish white, moist, smooth, opaque or partially translucent colonies (smooth or S forms). These smooth colonies are easily emulsifi-able in saline. The rough or R forms produce rough colonies with an irregular dull surface. These colonies are often autoaggluti-nable in saline. The smooth to rough variation (S–R variation) is associated with the loss of surface antigens and also with the loss of virulence and occurs as a result of repeated subculturing.

·           E. coli ferments lactose, glucose, mannitol, maltose, andmany other sugars with the production of acid and gas. They do not ferment sucrose. Some strains of E. coli are late lactose or nonlactose fermenters.

·           They do not liquefy gelatin, do not produce hydrogen sul-fide (H2S), or do not utilize urea. Some variant strains of E.coli produce H2S. 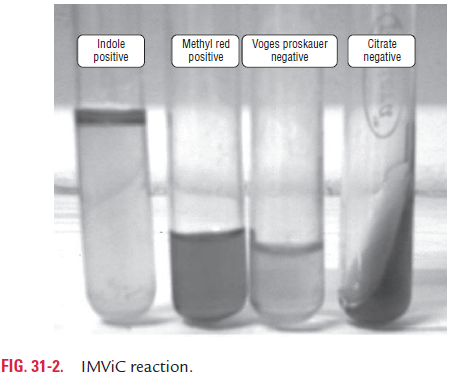