The heat-stable lipopolysaccharide (LPS) is the major cell wall antigen of E. coli. The LPS consists of three components: (a) the genus-specific somatic O polysaccharide, (b) a core polysaccha-ride common to all Enterobacteriaceae (common antigen), and (c) lipid A.

The heat-stable lipopolysaccharide (LPS) is the major cell wall antigen of E. coli. The LPS consists of three components: (a) the genus-specific somatic O polysaccharide, (b) a core polysaccha-ride common to all Enterobacteriaceae (common antigen), and (c) lipid A. 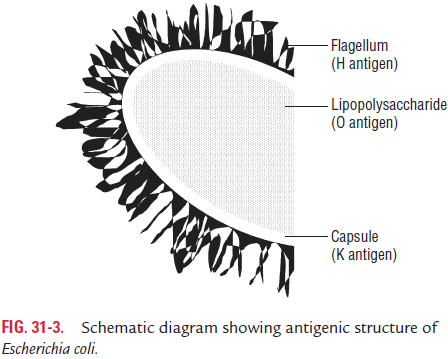 O or somatic antigen: O antigens occur on the surface ofthe outer membranes and are determined by specific sugar sequences on the cell surface. O antigen is an LPS complex and is an integral part of the cell wall. It is heat stable, resistant to boiling up to 2 hours and 30 minutes. Till now, 173 (1, 2, 3, etc. up to 173) O antigens have been described. 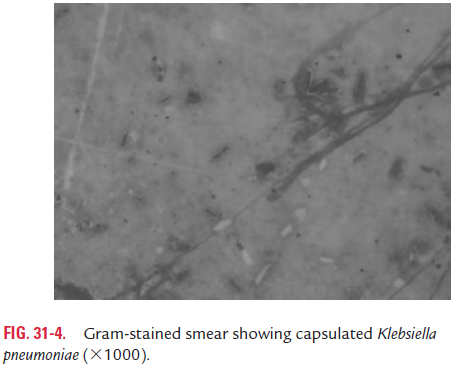 K or capsular antigen: The heat-labile K antigen is the acidicpolysaccharide antigen present in the “envelope” or microcap-sule (K for Kapsel, German for capsule) of the bacteria.

·      K antigen encloses the O antigen and may interfere with detection of the O antigens. This problem is overcome by boiling of the bacterial suspension to remove the K antigens

·           K antigens may also contribute to virulence by inhibiting phagocytosis. The K antigens are poor activators of com-plement. A total of 103 “K” antigens have been recognized.

·           The K antigens are of two types: I and II. E. coli K I antigen shows cross-reaction with Neisseria meningitidis and Haemoph-ilus influenzae capsular antigens. Differences between the twogroups are summarized in Table 31-4.

F or Fimbrial antigens: These antigens are present on thefimbriae and are heat-labile proteins. A number of filamentous protein structures resembling fimbriae have been described in E. coli. These are K88, K99 antigens in E. coli strains causing diar-rhea in animals or colonization factor antigens (CFA) in entero-toxigenic E. coli (ETEC) causing diarrhea in humans. These fimbrial antigens also contribute to virulence of the bacteria.

The serotyping of E. coli is based on three major groups of antigens: O antigens, K antigens, and H antigens. E. coli strains on the basis of O antigens are initially divided into a number of O groups. Each O group is then further divided into subgroups on the basis of K antigens. Finally, each of the subgroup includes strains with different H antigens. The antigenic pat-tern of a strain is recorded depending on the number of the particular antigen it carries (e.g., E. coli O111:K58:H2).

Different serotypes of E. coli are found in the normal intes-tine of humans and they do not have K antigens.