Enterobacteriaceae organisms are ubiquitous bacteria. They are distributed worldwide and found in the soil, water, and plants.

Enterobacteriaceae organisms are ubiquitous bacteria. They are distributed worldwide and found in the soil, water, and plants. They are also present as part of the normal intestinal flora of humans and animals. Members of this family are nonsporing, nonacid fast, and moderately sized Gram-negative bacilli. They are motile by peritrichous flagella or nonmotile without any flagella. They are aerobic and facultatively anaerobic and grow readily on ordinary media, ferment sugars with production of acid and gas or acid only, reduce nitrate to nitrite, and are cata-lase-positive but oxidase-negative. The oxidase test is an impor-tant test by which the members of the Enterobacteriaceae can be distinguished from many other fermentative and nonfer-mentative Gram-negative bacilli. Members of the family show a very wide biochemical and antigenic heterogeneity among themselves. Enterobacteriaceae organisms cause a variety of diseases in humans (Fig. 31-1):

a)        Some members of the family, such as Salmonella species, Shigella species, etc., always cause diseases in humans.

b)         Other species, such as Escherichia coli, Klebsiella pneumoniae, Proteusmirabilis, etc., found as normal intestinal flora in humanscan also cause infections in other sites of the human body.

c)        In addition to these, there is another group of Enterobacte-riaceae organisms, which are found as normal commensals in humans but become pathogenic when they acquire virulence factor genes through plasmids, bacteriophages, or pathogenicity islands. E. coliassociated with gastroen-teritis in humans is one such example. 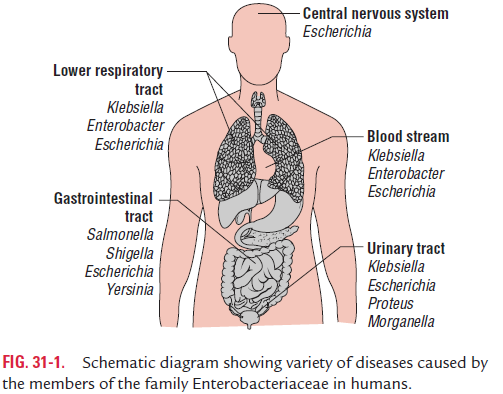 Enterobacteriaceae organisms are acquired from humans (Salmonella Typhi, Shigella species, etc.), animals (Salmonella species andYersinia species), or through endogenous infection. In the latter, the pathogen (E. coli) can spread from primary site of infection to virtually all the sites of the body

Earlier, the characteristics of the colonies on commonly used medium (such as the MacConkey medium) were used to iden-tify and classify the members of family Enterobacteriaceae. The colonies were classified as lactose-fermenting bacteria (Escherichia spp.,Klebsiella spp., Enterobacter spp., Citrobacter spp., etc.) or nonlactose-fermenting bacteria (Salmonella spp., Shigella spp., Proteusspp., etc.) depending on the ability of the bacteria to ferment lactose. This was used as a practical method in a routine diagnostic laboratory.

Human infections caused by common members of the family Enterobacteriaceae are summarized in Table 31-3. 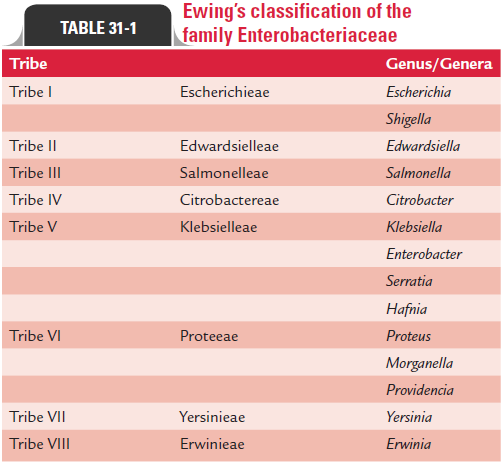 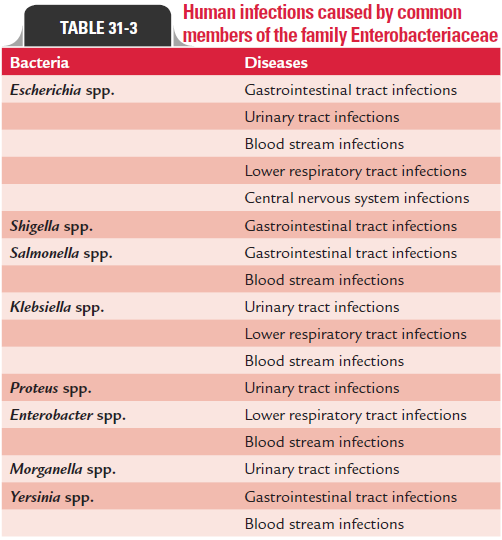