The anaerobic non–spore-forming Gram-positive bacilli are a heterogeneous group of facultatively anaerobic or strictly anaerobic bacteria that characteristically colonize the skin and mucosal membranes.

The anaerobic non–spore-forming Gram-positive bacilli are a heterogeneous group of facultatively anaerobic or strictly anaerobic bacteria that characteristically colonize the skin and mucosal membranes. The group includes many genera, but few of these are associated with clinical infections (Table 30-1). 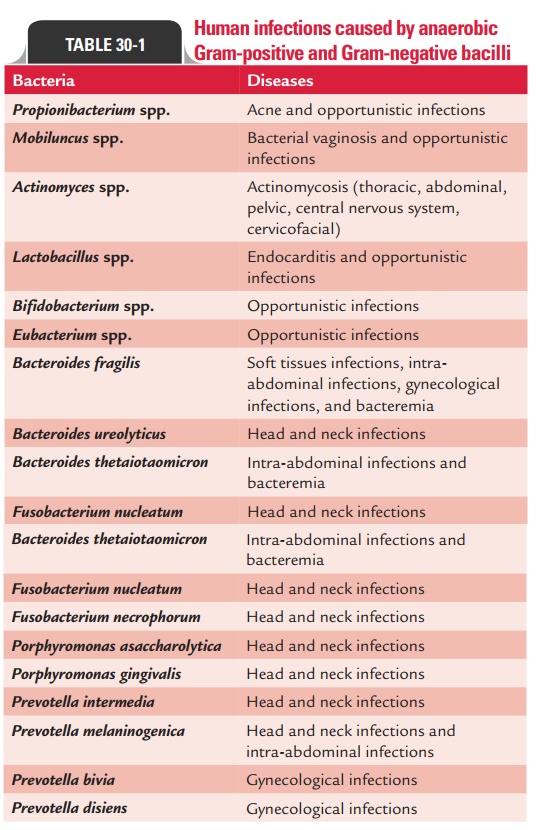 Propionibacterium species are anaerobic or aerotolerant bacteriafound as part of the normal flora of the skin, oropharynx, con-junctiva, external ear, and female genital tract.

·           They are Gram-positive bacilli that are frequently present in short chains and clumps.

·           Propionibacterium are not fastidious. They can grow on nutri-ent agar or other simple media. However, they grow slowly, take 3–5 days to produce colonies.

Propionibacterium acnes and Propionibacterium propionicus aretwo important species of clinical importance. P. acne is the most common causative agent of acne in teenagers and young adults. The species also causes infections of heart valves or joints and cerebrospinal fluid shunts and cellulitis. P. acne is a common contaminant in blood and cerebrospinal fluid culture.

Isolation of Propionibacterium from clinical specimens needs to be interpreted in light of the clinical condition. The lesions in acne develop within the sebaceous follicles; hence are not related to effectiveness of the cleanliness of the skin.

The condition is treated best with topical application of benzoyl peroxide and antibiotics. The bacteria are sensitive to erythromycin and clindamycin.

Members of the genus Lactobacillus are facultatively anaerobic bacilli. They are commonly found in the mouth, stomach, and intestine and in the adult vagina. They are commonly isolated in blood and urine cultures. The presence of lactobacilli even in high numbers in urine culture usually represents contami-nation of bacteria from the urethra, in which lactobacillus are most commonly present. Lactobacilli usually do not cause infec-tion of the urinary tract, because they fail to grow in the urine.

Lactobacilli can invade the blood stream during (a) endocardi-tis, (b) opportunistic septicemia in immunocompromised host, and (c) transient bacteremia following genitourinary procedure.

Combined therapy with penicillin and aminoglycoside has proved effective against infections caused by lactobacilli. Lactobacilli are resistant to vancomycin.

Mobiluncus species are obligate anaerobes. They are Gram-negative or Gram-variable curved bacilli with tapering ends. Despite their Gram-variable properties, they are classified as Gram-positive bacteria because they have a cell wall of Gram-positive bacilli, and they lack endotoxin. The bacteria are fas-tidious; they grow slowly on enrichment media, such as blood agar containing either rabbit or horse blood. They are found as part of the normal flora of the genitourinary tract. In women with bacterial vaginitis, they are found in very high numbers. The exact role of the bacteria as a causative of bacterial vagino-sis is not known. Typical Gram-staining features of the bacteria are diagnostic. They are sensitive to erythromycin, ampicillin, clindamycin, and vancomycin but resistant to colistin.

Bifidobacterium spp. and Eubacterium spp. are commonly foundin the oropharynx, large intestine, and vagina. They are usually isolated as contaminants. Repeated isolation of these bacteria in absence of other pathogens may suggest their role as possible agents of infection.

Anaerobic Gram-negative bacilli of clinical importance belong to the family Bacteroidaceae. This is classified into four genera:

Bacteroides, Fusobacterium, Porphyromonas, and Prevotella. Allthese are Gram negative. Prevotella species are very small and elongated, while Fusobacterium species are long and thin. A surface lipopolysaccharide (LPS) is the major component of the cell wall.

Bacteroides species have now been reorganized. Earlier, genus Bacteroides consisted of almost 50 species. Now, asaccharolyticpigmented species have been reclassified into the genus Porphyromonas (Greek word, meaning “purple”) and saccharolyticbile sensitive species in the genus Prevotella. The genus Bacteroides now includes Bacteroides fragilis and closely related other species, such as Bacteroides distasonis, Bacteroides vulgatus, and Bacteroides the-taiotaomicron. B. fragilis is the prototype of endogenous anaerobicpathogen that colonizes humans. B. fragilis is pleomorphic in size and shape, having a typical Gram-negative cell wall. A surface lipopolysaccharide (LPS) is major component of the cell wall. The LPS of B. fragilis lacks endotoxin activity unlike the LPS of Fusobacterium. B. fragilis is surrounded by a polysaccharide capsule. Bacteroides are nonfastidious and grow rapidly in culture, whileother anaerobic Gram-negative bacilli are fastidious and grow slowly (3 days and more) in the culture media.

The ability of the bacteria to (a) inactivate immunoglobu-lins, (b) cause tissue destruction, and (c) resist oxygen toxicity plays an important role in the pathogenesis of anaerobic infections. B. fragilis and other anaerobic Gram-negative bacilli produce a wide variety of virulence factors, which play a major role in the pathogenesis of disease (Table 30-2). The presence 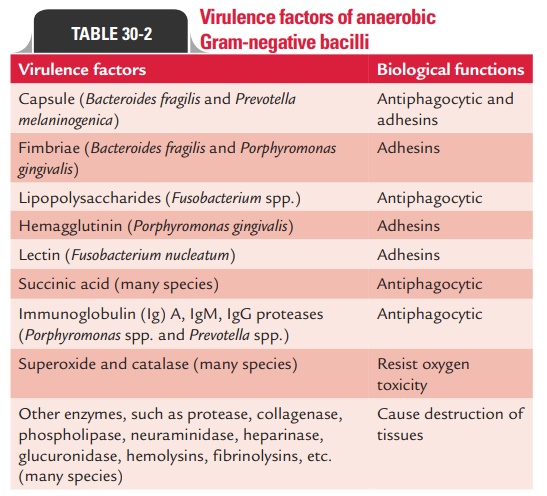 of polysaccharide capsule in B. fragilis helps the bacteria to adhere to peritoneal surfaces more effectively than other anaer-obes. The capsular polysaccharide is antiphagocytic; it inhibits phagocytosis by polymorphonuclear leukocytes. Succinic acid and other short-chain fatty acids provided by these bacteria during anaerobic metabolism also exhibit phagocytosis and intracellular killing of bacteria.

B. fragilis and other anaerobic Gram-negative bacteria usuallycolonize the skin, mouth, nasopharynx and upper respira-tory tract, intestine, and vagina in large numbers. As resident bacterial flora, they prevent colonization by other pathogenic organisms and help in digestion of food. These organisms, however, cause infections when they spread from their usual sites to other parts of the body that are usually sterile.

B. fragilis is the common anaerobic bacteria that cause abscessin the genitourinary tract. It is the most important anaerobic bacteria causing pelvic inflammatory disease, endometritis, abscess, and other infections of the female genital tract.

The anaerobic infections are characterized by the presence of poly-microbial mixture of organisms with more than one anaerobic and aerobic bacteria being responsible for the infection. The char-acteristic putrid pus with a nauseating and foul odor, pronounced cellulitis, and not so common fever and toxemia are suggestive of anaerobic infections caused by these Gram-negative bacilli.

This depends on the isolation of Gram-negative anaerobic bacteria in clinical specimens. Isolation of these bacteria need careful inter-pretation since most of the anaerobes are commensals and consti-tute part of the normal flora of the skin and mucous surface. The mere presence of the bacteria does not suggest their causative role.

The specimens, as far as possible, are not collected from their normal resident sites. The specimens are also not allowed to dry because drying reduces number of bacteria. Hence, speci-mens are always kept in a moist environment. The specimens are collected and transported to the laboratory in an oxygen-free system to minimize contact with air. In the laboratory, the specimens are inoculated into specific media promptly and incubated in anaerobic condition. Pus and other biological fluids are collected in glass vials or bottles with airtight caps. Collection of fluid and other aspiration in airtight syringes is a better method of collection. After collection, the needle is plunged into sterile rubber container and sealed. Swabs are not the specimen of choice for anaerobic infections but if collected are sent in Stuart’s transport medium.

Many selective media are used, which facilitate isolation of Gram-negative anaerobic bacteria. Freshly prepared blood agar with yeast extract, hemin, vitamin K, and neomycin is useful for culture of anaerobes. The culture plates are incu-bated in anaerobic jar at 37°C in the presence of 10% CO2. The gas-pack system, which provides a better method of anaero-biosis, is now used widely. MostBacteroides grow within 24–48 hours, but some other Gram-negative anaerobes, such as Fusobacterium, grow slowly; hence, culture plates require longerperiod of incubation. The specimens are cultured in parallel because many aerobic bacteria are also involved in polymicro-bial infections.

This depends mainly on surgical intervention and antibiotic therapy. Metronidazole is the antibiotic of choice for treatment of infection caused by Bacteroides and other Gram-negative anaerobes. The anaerobic Gram-negative bacilli are also sensitive to penicillin, clindamycin, cephalosporins, and chloramphenicol.

Most of the B. fragilis, Prevotella, and Porphyromonas species are resistant to penicillins and to many cephalospo-rins due to production of beta-lactamase. The resistance is overcome by treating with high concentration of carbeni-cillin, piperacillin, imipenem along with beta-lactamase inhibitors. Bacteroides show plasmid-mediated resistance to clindamycin.