The incidence of burn injuries has been declining during the past several decades.

The incidence of burn injuries has been declining during the past several decades. Approximately 2 million people require medical attention for burn injury in the United States each year (Kao & Garner, 2000). Of this group, 51,000 require acute hospital ad-mission. About 4,500 people die from burns and related inhalation injuries annually (American Burn Association, 2000). The risk of death increases significantly if the patient has sustained both a cu-taneous burn injury and a smoke inhalation injury.

Young children and elderly people are at particularly high risk for burn injury. The skin in people in these two age groups is thin and fragile; therefore, even a limited period of contact with a source of heat can create a full-thickness burn. The National Cen-ter for Injury Prevention and Control lists “fire/burn” among the categories of the 1998 Unintentional Injuries and Adverse Ef-fects. Chart 57-1 presents the ranking of “fire/burn” as cause of death by age group. 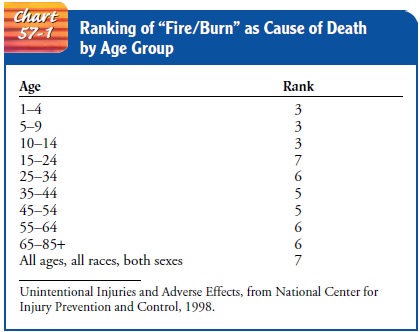 Most burn injuries occur in the home, usually in the kitchen while cooking and in the bathroom by means of scalds or im-proper use of electrical appliances around water sources (Gordon Goodwin, 1997). Careless cooking is one of the leading causes of household fires in the United States. The U.S. Fire Adminis-tration reports that nearly one third of all residential fires begin in the kitchen. The major factors contributing to cooking fires in-clude unattended cooking, grease, and combustible materials on the stovetop.

Burns can also occur from work-related injuries. Education to prevent burn injuries in the workplace should include safe handling of chemicals and chemical products and increasing awareness of the potential for injuries caused by hot objects and substances.

The Na-tional Institute for Burn Medicine, which collects statistical data from burn centers throughout the United States, notes that most patients (75%) are victims of their own actions. Contributing to the statistics are scalds in toddlers, school-age children playing with matches, electrical injury in teenage boys, and smoking in adults combined with the use of drugs and alcohol. One of the major culprits of burn injuries is the inappropriate use of gasoline. The U.S. Home Product Report, 1993–1997 (2000), indicated that there were over 140,000 gasoline-related fires and approximately 500 people died from gasoline-related injuries during this period.

Many burns can be prevented. Nurses can play an active role in preventing fires and burns by teaching prevention concepts and promoting legislation related to fire safety (Chart 57-2). Pro-moting the use of smoke alarms has had the greatest impact on decreasing fire deaths in the United States. 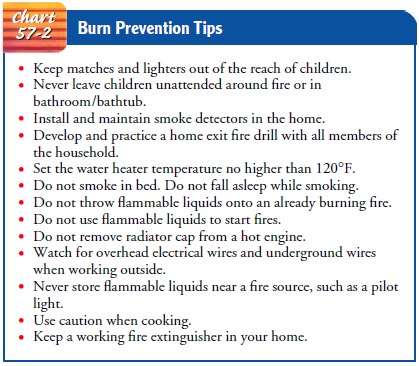 There are four major goals relating to burns:

·        Institution of lifesaving measures for the severely burned person

·        Prevention of disability and disfigurement through early, specialized, individualized treatment