Local and Systemic Responses to Burns

Burns that do not exceed 25% TBSA produce a primarily local response.

LOCAL AND SYSTEMIC RESPONSES TO BURNS

Burns that do not exceed 25% TBSA produce a primarily local response. Burns that exceed 25% TBSA may produce both a local and a systemic response and are considered major burn injuries. This systemic response is due to the release of cytokines and other mediators into the systemic circulation. The release of local me-diators and changes in blood flow, tissue edema, and infection can cause progression of the burn injury.

Pathophysiologic changes resulting from major burns during the initial burn-shock period include tissue hypoperfusion and organ hypofunction secondary to decreased cardiac output, fol-lowed by a hyperdynamic and hypermetabolic phase. The inci-dence, magnitude, and duration of pathophysiologic changes in burns are proportional to the extent of burn injury, with a max-imal response seen in burns covering 60% or more TBSA.

The initial systemic event after a major burn injury is hemo-dynamic instability, resulting from loss of capillary integrity and a subsequent shift of fluid, sodium, and protein from the in-travascular space into the interstitial spaces. Figure 57-3 illustrates the pathophysiologic processes in acute major burns. Hemody-namic instability involves cardiovascular, fluid and electrolyte, blood volume, pulmonary, and other mechanisms. 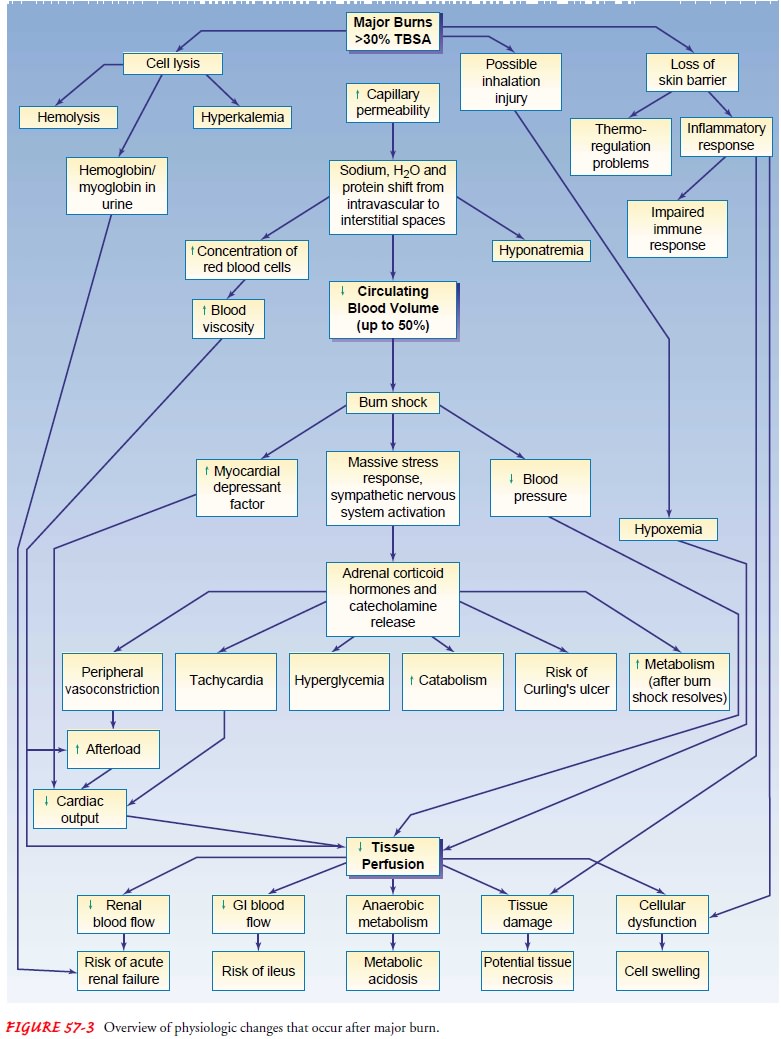 Hypovolemia is the immediate consequence of fluid loss result-ing in decreased perfusion and oxygen delivery. Cardiac output decreases before any significant change in blood volume is evi-dent. As fluid loss continues and vascular volume decreases, car-diac output continues to fall and blood pressure drops. This is the onset of burn shock. In response, the sympathetic nervous system releases catecholamines, resulting in an increase in peripheral re-sistance (vasoconstriction) and an increase in pulse rate. Periph-eral vasoconstriction further decreases cardiac output. Myocardial contractility may be suppressed by the release of inflammatory cytokine necrosis factor (Wolf, Prough & Herndon, 2002).

Prompt fluid resuscitation maintains the blood pressure in the low-normal range and improves cardiac output. Despite adequate fluid resuscitation, cardiac filling pressures (central venous pres-sure, pulmonary artery pressure, and pulmonary artery wedge pressure) remain low during the burn-shock period. If inadequate fluid resuscitation occurs, distributive shock will occur. Generally, the greatest volume of fluid leak occurs in the first 24 to 36 hours after the burn, peaking by 6 to 8 hours. As the cap-illaries begin to regain their integrity, burn shock resolves and fluid returns to the vascular compartment. As fluid is reabsorbed from the interstitial tissue into the vascular compartment, blood volume increases. If renal and cardiac function is adequate, urinary output increases. Diuresis continues for several days to 2 weeks.

Local swelling due to thermal injury is often extensive. Edema is defined as the presence of excessive fluid in the tissue spaces (Lund, 1999). As previously noted, in burns involving less than 25% TBSA, the loss of capillary integrity and shift of fluid are localized to the burn itself, resulting in blister formation and edema only in the area of injury. Patients with more severe burns develop massive systemic edema. Edema is usually maximal after 24 hours. It begins to resolve 1 to 2 days post-burn and usually is completely resolved in 7 to 10 days post-injury. Edema in burn wounds can be reduced by avoiding excessive fluid during the early post-burn period. Unnecessary over-resuscitation will in-crease edema formation in both burn tissue and non-burn tissue.

As edema increases in circumferential burns, pressure on small blood vessels and nerves in the distal extremities causes an ob-struction of blood flow and consequent ischemia. This compli-cation is known as compartment syndrome. The physician may need to perform an escharotomy, a surgical incision into the eschar (devitalized tissue resulting from a burn), to relieve theconstricting effect of the burned tissue.

Circulating blood volume decreases dramatically during burn shock. In addition, evaporative fluid loss through the burn wound may reach 3 to 5 L or more over a 24-hour period until the burn surfaces are covered.

During burn shock, serum sodium levels vary in response to fluid resuscitation. Usually hyponatremia (sodium depletion) is present. Hyponatremia is also common during the first week of the acute phase, as water shifts from the interstitial to the vascular space.

At the time of burn injury, some red blood cells may be de-stroyed and others damaged, resulting in anemia. Despite this, the hematocrit may be elevated due to plasma loss. Blood loss during surgical procedures, wound care, and diagnostic studies and on-going hemolysis further contribute to anemia. Blood transfusions are required periodically to maintain adequate hemoglobin levels for oxygen delivery. Abnormalities in coagulation, including a de-crease in platelets (thrombocytopenia) and prolonged clotting and prothrombin times, also occur with burn injury.

Inhalation injury is the leading cause of death in fire victims. It is estimated that half of these deaths could have been prevented with use of a smoke detector. Often, burn victims make it out of a burning home safely. However, once they are outside, they may realize that their loved ones, pets, or valuable items are still inside the burning home. They then re-enter the burning home and are overcome with toxic smoke and fumes and become disoriented or unconscious.

Inhalation injury has a significant impact on survivability of a burn patient. Deterioration in severely burned patients can occur without evidence of a smoke inhalation injury. Bronchoconstric-tion caused by release of histamine, serotonin, and thromboxane, a powerful vasoconstrictor, as well as chest constriction secondary to circumferential full-thickness chest burns causes this deteriora-tion. One third of all burn patients have a pulmonary problem related to the burn injury (Flynn, 1999). Even without pulmo-nary injury, hypoxia (oxygen starvation) may be present. Early in the postburn period, catecholamine release in response to the stress of the burn injury alters peripheral blood flow, thereby re-ducing oxygen delivery to the periphery. Later, hypermetabolism and continued catecholamine release lead to increased tissue oxy-gen consumption, which can lead to hypoxia. To ensure that ad-equate oxygen is available to the tissues, supplemental oxygen may be needed.

Pulmonary injuries fall into several categories: upper airway in-jury; inhalation injury below the glottis, including carbon mono-xide poisoning; and restrictive defects. Upper airway injury results from direct heat or edema. It is manifested by mechanical ob-struction of the upper airway, including the pharynx and larynx. Because of the cooling effect of rapid vaporization in the pul-monary tract, direct heat injury does not normally occur below the level of the bronchus. Upper airway injury is treated by early naso-tracheal or endotracheal intubation.

Inhalation injury below the glottis results from inhaling the products of incomplete combustion or noxious gases. These prod-ucts include carbon monoxide, sulfur oxides, nitrogen oxides, aldehydes, cyanide, ammonia, chlorine, phosgene, benzene, and halogens. The injury results directly from chemical irritation of the pulmonary tissues at the alveolar level. Inhalation injuries be-low the glottis cause loss of ciliary action, hypersecretion, severe mucosal edema, and possibly bronchospasm. The pulmonary surfactant is reduced, resulting in atelectasis (collapse of alveoli). Expectoration of carbon particles in the sputum is the cardinal sign of this injury.

Carbon monoxide is probably the most common cause of inhalation injury because it is a byproduct of the combustion of organic materials and is therefore present in smoke. The patho-physiologic effects are due to tissue hypoxia, a result of carbon monoxide combining with hemoglobin to form carboxyhemo-globin, which competes with oxygen for available hemoglobin-binding sites. The affinity of hemoglobin for carbon monoxide is 200 times greater than that for oxygen. Treatment usually con-sists of early intubation and mechanical ventilation with 100% oxygen. However, some patients may require only oxygen ther-apy, depending on the extent of pulmonary injury and edema. Administering 100% oxygen is essential to accelerate the removal of carbon monoxide from the hemoglobin molecule.

Restrictive defects arise when edema develops under full-thickness burns encircling the neck and thorax. Chest excursion may be greatly restricted, resulting in decreased tidal volume. In such situations, escharotomy is necessary.

Pulmonary abnormalities are not always immediately apparent. More than half of all burn victims with pulmonary involvement do not initially demonstrate pulmonary signs and symptoms. Any patient with possible inhalation injury must be observed for at least 24 hours for respiratory complications. Airway obstruction may occur very rapidly or develop in hours. Decreased lung compli-ance, decreased arterial oxygen levels, and respiratory acidosis may occur gradually over the first 5 days after a burn.

Indicators of possible pulmonary damage include the following:

·      History indicating that the burn occurred in an enclosed area

·       Erythema and blistering of the oral or pharyngeal mucosa

Pulmonary complications secondary to inhalation injuries in-clude acute respiratory failure and acute respiratory distress syn-drome (ARDS). Respiratory failure occurs when impairment of ventilation and gas exchange is life-threatening. The immediate intervention is intubation and mechanical ventilation. If ventila-tion is impaired by restricted chest excursion, immediate chest es-charotomy is needed. ARDS may develop in the first few days after the burn injury secondary to systemic and pulmonary re-sponses to the burn and inhalation injury.

Renal function may be altered as a result of decreased blood vol-ume. Destruction of red blood cells at the injury site results in free hemoglobin in the urine. If muscle damage occurs (eg, from electrical burns), myoglobin is released from the muscle cells and excreted by the kidney. Adequate fluid volume replacement restores renal blood flow, increasing the glomerular filtration rate and urine volume. If there is inadequate blood flow through the kidneys, the hemoglobin and myoglobin occlude the renal tubules, resulting in acute tubular necrosis and renal failure.

The immunologic defenses of the body are greatly altered by burn injury. Serious burn injury diminishes resistance to infec-tion. As a result, sepsis remains the leading cause of death in ther-mally injured patients (Cioffi, 2001). The loss of skin integrity is compounded by the release of abnormal inflammatory factors, altered levels of immunoglobulins and serum complement, im-paired neutrophil function, and a reduction in lymphocytes (lym-phocytopenia). Research suggests that burn injury results in loss of T-helper cell lymphocytes (Munster, 2002). There is a signif-icant impairment of the production and release of granulocytes and macrophages from bone marrow after burn injury. The re-sulting immunosuppression places the burn patient at high risk for sepsis.

Loss of skin also results in an inability to regulate body tem-perature. Burn patients may therefore exhibit low body temper-atures in the early hours after injury. Then, as hypermetabolism resets core temperatures, burn patients become hyperthermic for much of the postburn period, even in the absence of infection.

Two potential gastrointestinal complications may occur: par-alytic ileus (absence of intestinal peristalsis) and Curling’s ulcer. Decreased peristalsis and bowel sounds are manifestations of par-alytic ileus resulting from burn trauma. Gastric distention and nausea may lead to vomiting unless gastric decompression is ini-tiated. Gastric bleeding secondary to massive physiologic stress may be signaled by occult blood in the stool, regurgitation of “coffee ground” material from the stomach, or bloody vomitus. These signs suggest gastric or duodenal erosion (Curling’s ulcer).