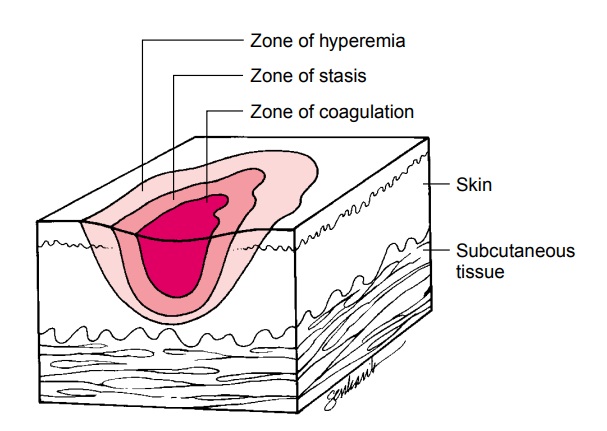 In a superficial partial-thickness burn, the epidermis is de-stroyed or injured and a portion of the dermis may be injured. The damaged skin may be painful and appear red and dry, as in sunburn, or it may blister.

A deep partial-thickness burn involves destruction of the epi-dermis and upper layers of the dermis and injury to deeper por-tions of the dermis. The wound is painful, appears red, and exudes fluid. Capillary refill follows tissue blanching. Hair folli-cles remain intact. Deep partial-thickness burns take longer to heal and are more likely to result in hypertrophic scars.

A full-thickness burn involves total destruction of epidermis and dermis and, in some cases, underlying tissue as well. Wound color ranges widely from white to red, brown, or black. The burned area is painless because nerve fibers are destroyed. The wound appears leathery; hair follicles and sweat glands are destroyed (Fig. 57-1). 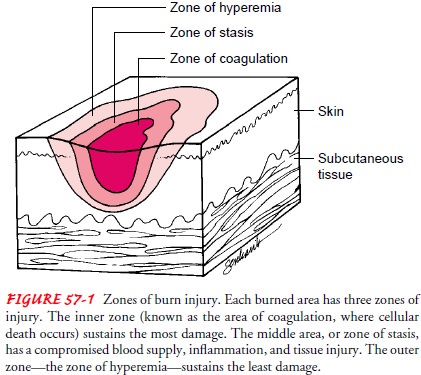 The following factors are considered in determining the depth of the burn:

·       Causative agent, such as flame or scalding liquid

·       Temperature of the burning agent

Various methods are used to estimate the TBSA affected by burns; among them are the rule of nines, the Lund and Browder method, and the palm method.

An estimation of the TBSA involved in a burn is simplified by using the rule of nines (Fig. 57-2). The rule of nines is a quick way to calculate the extent of burns. The system assigns percent-ages in multiples of nine to major body surfaces. 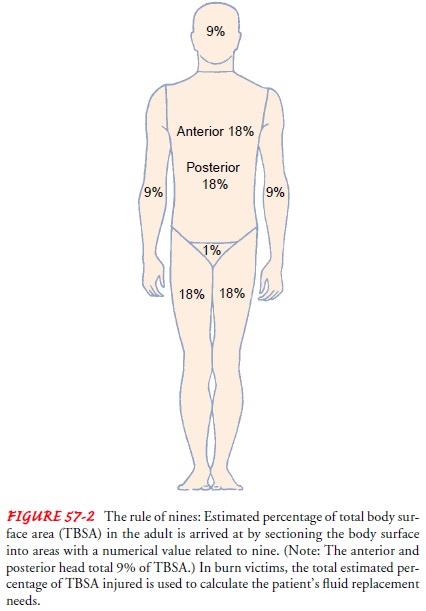 A more precise method of estimating the extent of a burn is the Lund and Browder method, which recognizes that the percent-age of TBSA of various anatomic parts, especially the head and legs, and changes with growth. By dividing the body into very small areas and providing an estimate of the proportion of TBSA accounted for by such body parts, one can obtain a reliable esti-mate of the TBSA burned. The initial evaluation is made on the patient’s arrival at the hospital and is revised on the second and third post-burn days because the demarcation usually is not clear until then.

In patients with scattered burns, a method to estimate the per-centage of burn is the palm method. The size of the patient’s palm is approximately 1% of TBSA.