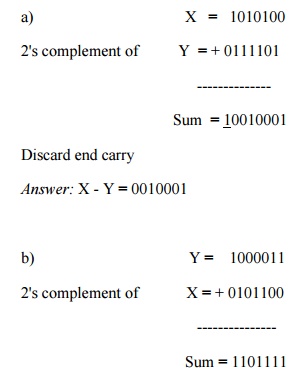 There is no end carry, 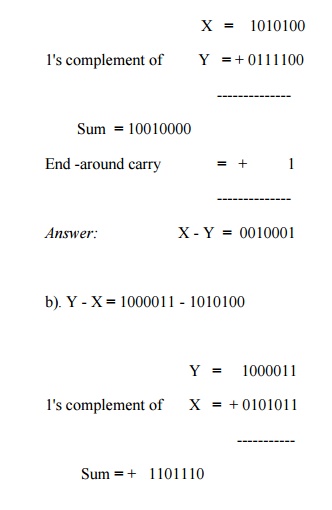 There is no end carry.

A parity bit is an extra bit included with a message to make the total number of 1's either even or odd. Consider the following two characters and their even and odd parity:

Binary logic consists of binary variables and logical operations. The variables are designated by the alphabets such as A, B, C, x, y, z, etc., with each variable having only two distinct values: 1 and 0. There are three basic logic operations: AND, OR, and NOT.

Logic gates are electronic circuits that operate on one or more input signals to produce an output signal. Electrical signals such as voltages or currents exist throughout a digital system in either of two recognizable values. Voltage- operated circuits respond to two separate voltage levels that represent a binary variable equal to logic 1 or logic 0.

18).Convert the given expression in canonical SOP form Y = AC + AB + BC

Simplify the function and express it in sum of products.

Draw a NAND gate for each product term of the expression that has at least two literals.

A term with a single literal requires an inverter in the first level. How ever if the single literal is complemented, it can be connected directly to an input of the second level NAND gate.

21) Give the general procedure for converting a Boolean expression in to multilevel NAND diagram?

Draw the AND-OR diagram of the Boolean expression.

Check all the bubbles in the same diagram. For every bubble that is not compensated by another circle along the same line, insert an inverter or complement the input literal.

22) What are combinational circuits?

23) Give the design procedures for the designing of a combinational circuit.

The procedure involves the following steps,

From the specification of the circuit, determine the required number of inputs and outputs and assign a symbol to each.

Derive the truth table that defines the required relationships between inputs and outputs. Obtain the simplified Boolean functions for each output as a function of the input variables.

Draw the logic diagram and verify the correctness of the design.

A combinational circuit that performs the addition of two bits is called a half adder. A half adder needs two binary inputs and two binary outputs. The input variables designate the augend and addend bits; the output variables produce the sum and carry

A combinational circuit that performs the adtion of three bits is a full adder.It consists of three inputs and two outputs.

The NAND connection is not associative says that A . B . C A . B. C

Logic gates are the basic elements that make up a digital system. The electronic gate is a circuit that is able to operate on a number of binary inputs in order to perform a particular logical function.

33. Why are NAND and NOR gates known as universal gates?

The NAND and NOR gates are known as universal gates, since any logic function can be implemented using NAND or NOR gates.

When logic gates are connected together to produce a specified output for certain specified combinations of input variables, with no storage involved, the resulting circuit is called combinational logic.

The logic circuit which performs the addition of two bits is a half adder.

The circuit which performs the addition of three bits is a full adder.