All digital systems are made from a few basic digital circuits that we call logic gates. These circuits perform the basic logic functions that we will describe in this session. The physical realization of these logic gates has changed over the years from mechanical relays to electronic vacuum tubes to transistors to integrated circuits containing thousands of transistors.

In this appendix you will learn:

So, signals in a digital logic circuit take on the values of 0 or 1. Logic gates are devices which compute functions of these binary signals.

Consider the circuit below which consists of a battery, a light, and two switches in series:

When will the light turn on? It should be clear that the light will turn on only if both switch S1 and switch S2 are shut.

Returning to the circuit above, we can represent the light's operation using a table:

This table, which displays the output for all possible combinations of the input, is termed the truth table for the AND operation. In a computer, this and functionality is implemented with a circuit called an AND gate. The simplest AND gate has two inputs and one output and is represented pictorially by the symbol:

We represent the and operation by using either the multiplication symbol (i.e., “ ∙ “) or by writing the inputs together. Thus, for the AND gate shown above, we would write the output c as c = a b or as c = ab. This would be pronounced: “c = a and b.” 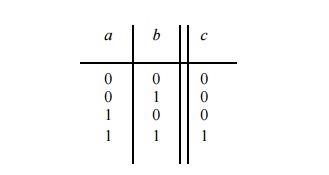 AND gates can have more than one input (however, an AND gate always has just a single output). Let’s consider a three-input AND gate: 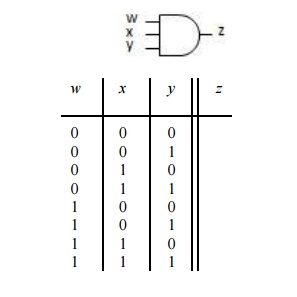 Now consider the circuit shown below, that has 2 switches in parallel.

It is evident that the light will turn on when either switch S1 is shut or switch S2 is shut or both are shut.

It is quite likely that you encounter the or operation in some shape or form hundreds of times each day. Consider the simple action of sitting on your couch at home at two in the morning studying for your Digital Logic class. Your phone will ring if you get a call from Alice or from Bob. Your home’s security alarm will go off if the front door opens or the back door opens. You will drink a cup of coffee if you are drowsy or you are thirsty.

We can represent the light's operation using a table

Changing the words open and off to 0 and the words shut and on to 1 and the table becomes:

This is the truth table for the OR operation. This or functionality is implemented with a circuit called an OR gate. The simplest OR gate has two inputs and one output and is represented pictorially by the symbol:

We represent the or operation by using the addition symbol. Thus, for the OR gate above, we would write the output c as c = a + b. This would be pronounced: “c = a or b.”

The pictorial symbol for a NOT gate is intended to depict an amplifier followed by a bubble, shown below. Sometimes the NOT operation is represented by just the bubble, without the amplifier.

The truth table for the NOT gate is shown below:

Three new gates, NAND, NOR, and Exclusive-OR, can be formed from our three basic gates: NOT, AND, and OR. 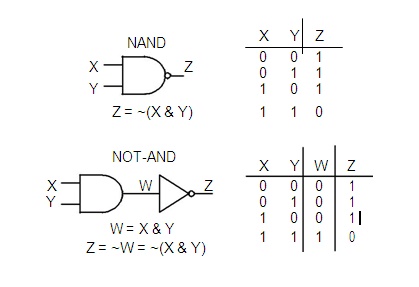 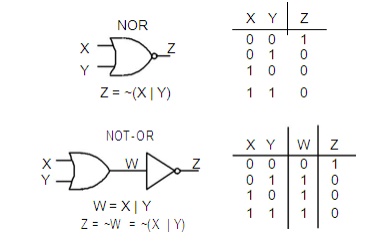 The XOR gate logic symbol is like an OR gate symbol with an extra curved vertical line on the input. From the truth table .we see that the output Z of an XOR gate is 1 (true or high) if either input, X or Y, is 1 (true or high), but not both. The output Z will be zero if both X and Y are the same (either both 1 or both 0). 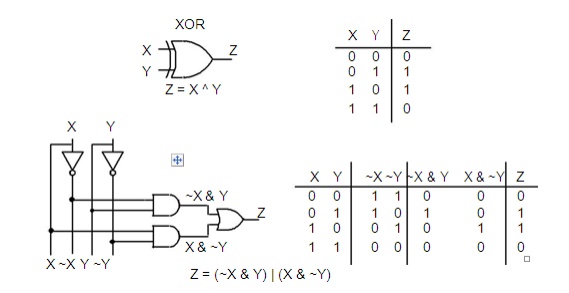