Another number system that is encountered occasionally is Binary Coded Decimal. In this system, numbers are represented in a decimal form, however each decimal digit is encoded using a four bit binary number.

Another number system that is encountered occasionally is Binary Coded Decimal. In this system, numbers are represented in a decimal form, however each decimal digit is encoded using a four bit binary number.

we haven’t considered the maximum size of the number. We have assumed that as many bits are available as needed to represent the number. In most computer systems, this isn’t the case. Numbers in computers are typically represented using a fixed number of bits. These sizes are typically 8 bits, 16 bits, 32 bits, 64 bits and 80 bits. These sizes are generally a multiple of 8, as most computer memories are organized on an 8 bit byte basis. Numbers in which a specific number of bits are used to represent the value are called fixed precision numbers. When a specific number of bits are used to represent a number, that determines the range of possible values that can be represented. For example, there are 256 possible combinations of 8 bits, therefore an 8 bit number can represent 256 distinct numeric values and the range is typically considered to be 0-255. Any number larger than 255 can’t be represented using 8 bits. Similarly,

When fixed precision numbers are used, (as they are in virtually all computer calculations) the concept of overflow must be considered. An overflow occurs when the result of a calculation can’t be represented with the number of bits available. For example when adding the two eight bit quantities: 150 + 170, the result is 320. This is outside the range 0-255, and so the result can’t be represented using 8 bits. The result has overflowed the available range. When overflow occurs, the low order bits of the result will remain valid, but the high order bits will be lost. This results in a value that is significantly smaller than the correct result.

When doing fixed precision arithmetic (which all computer arithmetic involves) it is necessary to be conscious of the possibility of overflow in the calculations.

Two’s complement representation is used because it reduces the complexity of the hardware in the arithmetic-logic unit of a computer’s CPU. Using a two’s complement representation, all of the arithmetic operations can be performed by the same hardware whether the numbers are considered to be unsigned or signed. The bit operations performed are identical, the difference comes from the interpretation of the bits. The interpretation of the value will be different depending on whether the value is considered to be unsigned or signed. 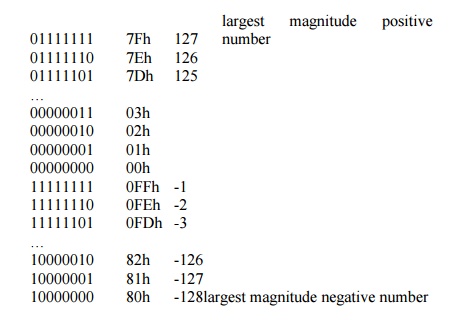 Counting up from 0, when 127 is reached, the next binary pattern in the sequence corresponds to -128. The values jump from the greatest positive number to the greatest negative number, but that the sequence is as expected after that. (i.e. adding 1 to –128 yields –127, and so on.). When the count has progressed to 0FFh (or the largest unsigned magnitude possible) the count wraps around to 0. (i.e. adding 1 to –1 yields 0).

The name ASCII is an acronym for: American Standard Code for Information Interchange. It is a character encoding standard developed several decades ago to provide a standard way for digital machines to encode characters. The ASCII code provides a mechanism for encoding alphabetic characters, numeric digits, and punctuation marks for use in representing text and numbers written using the Roman alphabet. As originally designed, it was a seven bit code. The seven bits allow the representation of 128 unique characters. All of the alphabet, numeric digits and standard English punctuation marks are encoded. The ASCII standard was later extended to an eight bit code (which allows 256 unique code patterns) and various additional symbols were added, including characters with diacritical marks (such as accents) used in European languages, which don’t appear in English. There are also numerous non-standard extensions to ASCII giving different encoding for the upper 128 character codes than the standard. For example, The character set encoded into the display card for the original IBM PC had a non-standard encoding for the upper character set. This is a non-standard extension that is in very wide spread use, and could be considered a standard in itself.

The first 32 characters (codes 0-1Fh) and 7Fh are control characters. They do not have a standard symbol (glyph) associated with them. They are used for carriage control, and protocol purposes. They include 0Dh (CR or carriage return), 0Ah (LF or line feed), 0Ch (FF or form feed), 08h (BS or backspace).

ASCII code chart that the uppercase letters start at 41h and that the lower case letters begin at 61h. In each case, the rest of the letters are consecutive and in alphabetic order. The difference between 41h and 61h is 20h. Therefore the conversion between upper and lower case involves either adding or subtracting 20h to the character code. To convert a lower case letter to upper case, subtract 20h, and conversely to convert upper case to lower case, add 20h. It is important to note that you need to first ensure that you do in fact have an alphabetic character before performing the addition or subtraction. Ordinarily, a check should be made that the character is in the range 41h–5Ah for upper case or 61h-7Ah for lower case.

Conversion Between ASCII and BCD

ASCII code chart that the numeric characters are in the range 30h-39h. Conversion between an ASCII encoded digit and an unpacked BCD digit can be accomplished by adding or subtracting 30h. Subtract 30h from an ASCII digit to get BCD, or add 30h to a BCD digit to get ASCII. Again, as with upper and lower case conversion for alphabetic characters, it is necessary to ensure that the character is in fact a numeric digit before performing the subtraction. The digit characters are in the range 30h-39h. 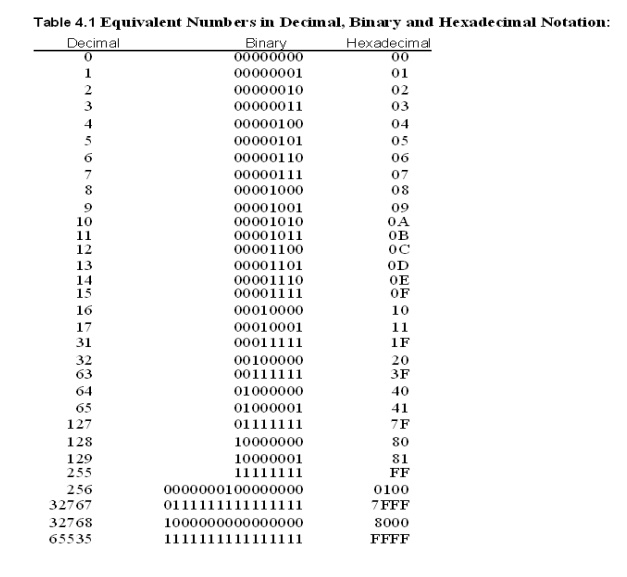