Home | | Basic Electrical and Electronics Engineering | Counters: Synchronous Counter and Asynchronous Up Down Counter
Posted On :  27.11.2016 12:25 am

Counters: Synchronous Counter and Asynchronous Up Down Counter

Counters are a specific type of sequential circuit. Like registers, the state, or the flip-flop values themselves, serves as the “output.”

•      Counters are a specific type of sequential circuit.

•      Like registers, the state, or the flip-flop values themselves, serves as the “output.”

•      The output value increases by one on each clock cycle.

•      You may need to record how many times something has happened.

–  How many bits have been sent or received?

–  How many steps have been performed in some computation?

•      All processors contain a program counter, or PC.

– Programs consist of a list of instructions that are to be executed one after another (for the most part).

–  The PC keeps track of the instruction currently being executed.

– The PC increments once on each clock cycle, and the next program instruction is then executed.

Each FF is triggered one at a time with output of one FF serving as clock input of next FF in the chain.

All the FF‟ s in the counter are clocked at the same time.

Counter counts from zero to a maximum count.

Counter counts from a maximum count down to zero.

Shift register in which the output of the last FF is connected back to the input of the first FF.

Shift register in which the inverted output of the last FF is connected to the input of the first FF.

There is a problem with the ripple counter just discussed. The output stages of the flip-flops further down the line (from the first clocked flip-flop) take time to respond to changes that occur due to the initial clock signal. This is a result of the internal propagation delay that occurs within a given flip-flop.

A standard TTL flip-flop may have an internal propagation delay of 30 ns. If you join four flip-flops to create a MOD-16 counter, the accumulative propagation delay at the highest-order output will be 120 ns. When used in high-precision synchronous systems, such large delays can lead to timing problems.

To avoid large delays, you can create what is called a synchronous counter. Synchronous counters, unlike ripple (asynchronous) counters, contain flip-flops whose clock inputs are driven at the same time by a common clock line. This means that output transitions for each flip-flop will occur at the same time. Now, unlike the ripple counter, you must use some additional logic circuitry placed between various flip-flop inputs and outputs to give the desired count waveform.

For example, to create a 4-bit MOD-16 synchronous counter requires adding two additional AND gates, as shown below. The AND gates act to keep a flip-flop in hold mode (if both input of the gate are low) or toggle mode (if both inputs of the gate are high). So, during the 0–1 count, the first flip-flop is in toggle mode (and always is); all the rest are held in hold mode. When it is time for the 2–4 count, the first and second flip-flops are placed in toggle mode; the last two are held in hold mode. 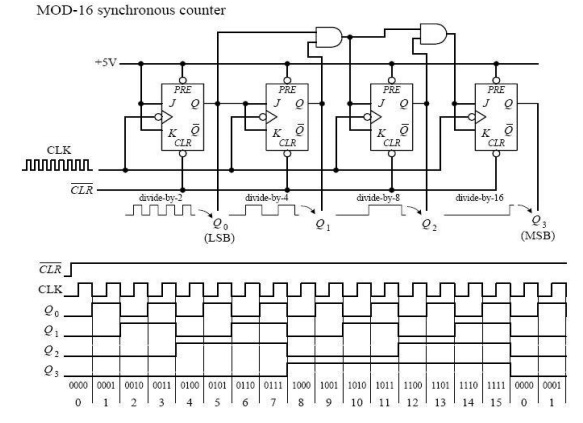 The ripple (asynchronous) and synchronous counters discussed so far are simple but hardly ever used. In practice, if you need a counter, be it ripple or synchronous, you go out and purchase a counter IC. These ICs are often MOD-16 or MOD-10 counters and usually come with many additional features. For example, many ICs allow you to preset the count to a desired number via parallel input lines.

Synchronous Up /Down Counter

The down counter counts in reverse from 1111 to 0000 and then goes to 1111. If we inspect the count cycle, we find that each flip-flop will complement when the previous flip- flops are all 0 (this is the opposite of the up counter). The down counter can be implemented similar to the up counter, except that the AND gate input is taken from Q’ instead of Q. This is shown in the following Figure of a 4-bit up-down counter using T flip-flops. 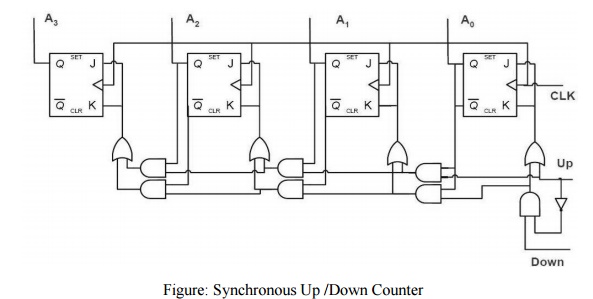 Figure: Synchronous Up /Down Counter

2 Asynchronous Up /Down Counter:

In certain applications, a counter must be able to count both up and down. The circuit below is a 3-bit up-down counter. It counts up or down depending on the status of the control signals UP and DOWN. When the UP input is at 1 and the DOWN input is at 0, the NAND network between FF0 and FF1 will gate the non-inverted output (Q) of FF0 into the clock input of FF1. Similarly, Q of FF1 will be gated through the other NAND network into the clock input of FF2. Thus the counter will count up.

Figure: Asynchronous Up /Down Counter

When the control input UP is at 0 and DOWN is at 1, the inverted outputs of FF0 and FF1 are gated into the clock inputs of FF1 and FF2 respectively. If the flip-flops are initially y reset to 0's, then the counter will go through the following sequence as input pulses are applied

Notice that an asynchronous up-down counter is slower than an up counter or a down counter because of the additional propagation delay introduced by the NAND networks.

This section begins our study of designing an important class of clocked sequential logic circuits-synchronous fi ni t e -state machines. Like all sequential circuits, a finite-state machine determines its outputs and its next state from its current inputs and current state. A synchronous finite state machine changes state only on the clocking event.