Here an OPAMP is used as summing amplifier. There are four resistors R, 2R, 4R and 8R at the input terminals of the OPAMP with R as feedback resistor. The network of resistors at the input terminal of OPAMP is called as variable resistor network. The four inputs of the circuit are D, C, B & A. Input D is at MSB and A is at LSB. Here we shall connect 8V DC voltage as logic–1 level. So we shall assume that 0 = 0V and 1 = 8V. 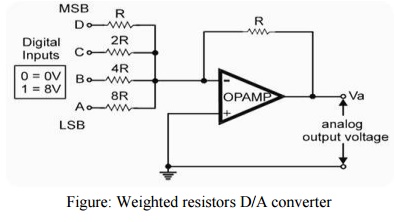 Working of the circuit

When input DCBA = 0000, then putting these value in above equation (1) we get

When digital input of the circuit DCBA = 0001, then putting these value in above equation (1) we get

When digital input of the circuit DCBA = 0010, then putting these value in above equation (1) we get

In this way, when digital input changes from 0000 to 1111 (in BCD style), output voltage (Vo) changes proportionally. This is given in the conversion chart. There are some main disadvantages of the circuit.

1) Each resistor in the circuit has different value.

2) So error in value of each resistor adds up.

3) The value of resistor at MSB is the lowest. Hence, it draws more current.

5) There is the problem of impedance matching due to different values of resistors.

It is modern type of resistor network. It has only two values of resistors the R and 2R. These values repeat throughout in the circuit. The OPAMP is used at output for scaling the output voltage. The working of the circuit can be understood as follows. For simplicity, we ignore the OPAMP in the above circuit (this is because its gain is unity). Now consider the circuit, without OPAMP. Suppose the digital input is DCBA = 1000. Then the circuit is reduced to a small circuit.

Its output is given by –

Reduced circuit of R-2R ladder, when we consider that all inputs=0

You can take (R) common from the above formula and simplify it. With the help of this formula, we can calculate any combination of digital input into its equivalent analog voltage at the output terminals.