A comparator compares the unknown voltage with a known value of voltage and then produces proportional output (i.e. it will produce either a 1 or a 0).

A comparator compares the unknown voltage with a known value of voltage and then produces proportional output (i.e. it will produce either a 1 or a 0). This principle is basically used in the above circuit. Here three comparators are used. Each has two inputs. One input of each comparator is connected to analog input voltage. The other input terminals are connected to fixed reference voltage like +3/4V, +V/2 and +V/4. Now the circuit can convert analog voltage into equivalent digital signal. Since the analog output voltage is connected in parallel to all the comparators, the circuit is also called as parallel A/D converter. 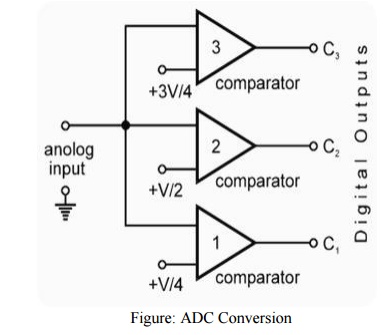 Working – Here each comparator is connected to a reference voltage of +3/4V, +V/2 and +V/4 with their outputs as C3C2C1 respectively. Now suppose the analog input voltage change from 0 – 4V, then the actual values of reference voltages will be +3/4V = 3V, +V/2 =2V and +V/4 =1V. Now there will be following conditions of outputs of the circuit

In this way, the circuit can convert the analog input voltage into its equivalent or proportional binary number in digital style.

The basic drawback of counter method (given above) is that it has longer conversion time. Because it always starts from 0000 at every measurement, until the analog voltage is matched. This drawback is removed in successive approximation method. In the adjacent figure, the method of successive approximation technique is shown. When unknown voltage (Va) is applied, the circuit starts up from 0000, as shown above. The output of SAR advances with each MSB. The output of SAR does not increase step–by–step in BCD bus pattern, but individual bit becomes high–starting from MSB. Then by comparison, the bit is fixed or removed. Thus, it sets first MSB (1000), then the second MSB (0100) and so on. Every time, the output of SAR is converted to equivalent analog voltage by binary ladder. It is then compared with applied unknown voltage (Va). The comparison process goes on, in binary search style, until the binary equivalent of analog voltage is obtained. In this way following steps are carried out during conversion. 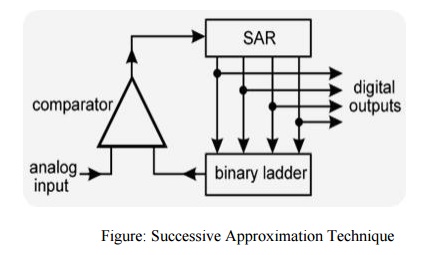 Now refer the following figure and the given steps -

5)    The fixing and removing the MSBs continues up to last bit (LSB), until equivalent binary output is obtained. 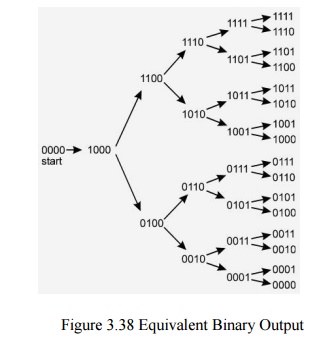 Also called the parallel A/D converter, this circuit is the simplest to understand. It is formed of a series of comparators, each one comparing the input signal to a unique reference voltage. The comparator outputs connect to the inputs of a priority encoder circuit, which then produces a binary output. 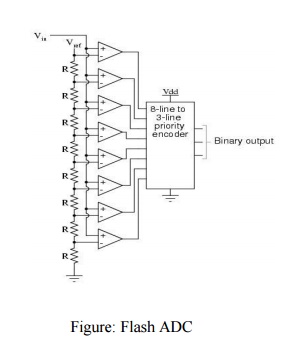 Vref is a stable reference voltage provided by a precision voltage regulator as part of the converter circuit, not shown in the schematic. As the analog input voltage exceeds the reference voltage at each comparator, the comparator outputs will sequentially saturate to a high state. The priority encoder generates a binary number based on the highest-order active input, ignoring all other active inputs.

When operated, the flash ADC produces an output that looks something like this