Glucose is a simple sugar which serves as a major energy source for us. It is the most important and most abundant sugar.

Glucose is a simple sugar which serves as a major energy source for us. It is the most important and most abundant sugar. It is present in honey, sweet fruits such as grapes and mangoes etc... Human blood contains about 100 mg/ dL of glucose, hence it is also known as blood sugar. In the combined form it is present in sucrose, starch, cellulose etc., 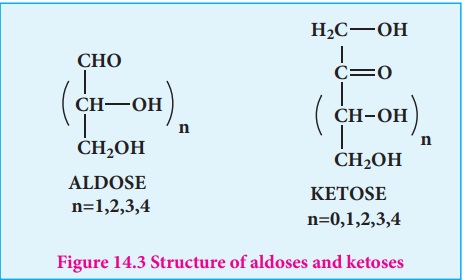 1. When sucrose (cane sugar) is boiled with dilute H 2 SO4 in alcoholic solution, it undergoes hydrolysis and give glucose and fructose.

2. Glucose is produced commercially by the hydrolysis of starch with dilute HCl at high temperature under pressure.

Glucose is an aldohexose. It is optically active with four asymmetric carbons. Its solution is dextrorotatory and hence it is also called as dextrose. The proposed structure of glucose is shown in the figure 14.4 which was derived based on the following evidences. 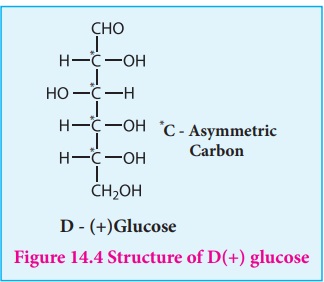 2. On reduction with concentrated HI and red phosphorus at 373K, glucose gives a mixture of n hexane and 2–iodohexane indicating that the six carbon atoms are bonded linearly.

3. Glucose reacts with hydroxylamine to form oxime and with HCN to form cyanohydrin. These reactions indicate the presence of carbonyl group in glucose. 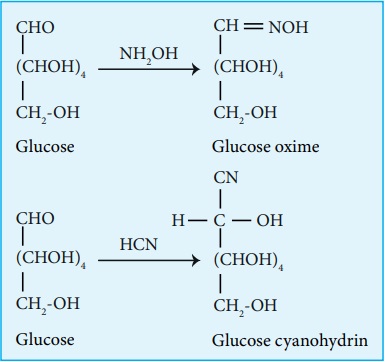 4. Glucose gets oxidized to gluconic acid with mild oxidizing agents like bromine water suggesting that the carbonyl group is an aldehyde group and it occupies one end of the carbon chain. When oxidised using strong oxidising agent such as conc. nitric acid gives glucaric acid (saccharic acid) suggesting the other end is occupied by a primary alcohol group. 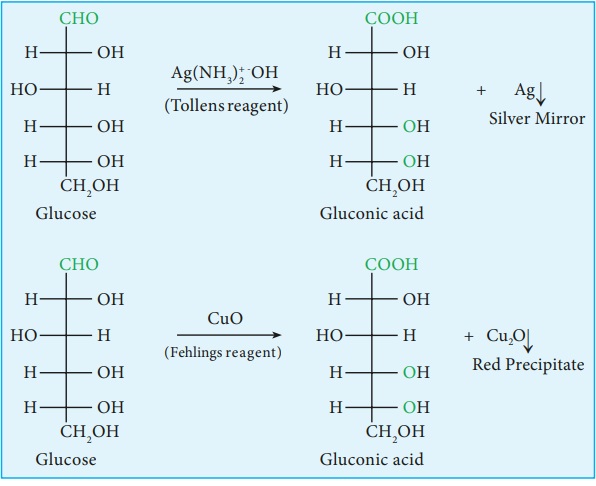 7. Glucose is a stable compound and does not undergo dehydration easily. It indicates that not more than one hydroxyl group is bonded to a single carbon atom. Thus the five the hydroxyl groups are attached to five different carbon atoms and the sixth carbon is an aldehyde group.

8. The exact spacial arrangement of -OH groups was given by Emil Fischer as shown in Figure 14.4. The glucose is referred to as D(+) glucose as it has D configuration and is dextrorotatory.

Fischer identified that the open chain penta hydroxyl aldehyde structure of glucose, that he proposed, did not completely explain its chemical behaviour. Unlike simple aldehydes, glucose did not form crystalline bisulphite compound with sodium bisulphite. Glucose does not give Schiff’s test and the penta acetate derivative of glucose was not oxidized by Tollen’s reagent or Fehling’s solution. This behaviour could not be explained by the open chain structure.

In addition, glucose is found to crystallise in two different forms depending upon the crystallisation conditions with different melting points (419 and 423 K). In order to explain these it was proposed that one of the hydroxyl group reacts with the aldehyde group to form a cyclic structure (hemiacetal form) as shown in figure 14.5. This also results in the conversion of the achiral aldehyde carbon into a chiral one leading to the possibility of two isomers. These two isomers differ only in the configuration of C1 carbon. These isomers are called anomers. The two anomeric forms of glucose are called a and β-forms. This cyclic structure of glucose is similar to pyran, a cyclic compound with 5 carbon and one oxygen atom, and hence is called pyranose form. The specific rotation of pure α- and β-(D) glucose are 112º and 18.7º respectively. However, when a pure form of any one of these sugars is dissolved in water, slow interconversion of α-D glucose and β-D glucose via open chain form occurs until equilibrium is established giving a constant specific rotation + 53º. This phenomenon is called mutarotation.

Sugar differing in configuration at an asymmetric centre is known as epimers. The process by which one epimer is converted into other is called epimerisation and it requires the enzymes epimerase. Galactose is converted to glucose by this manner in our body. 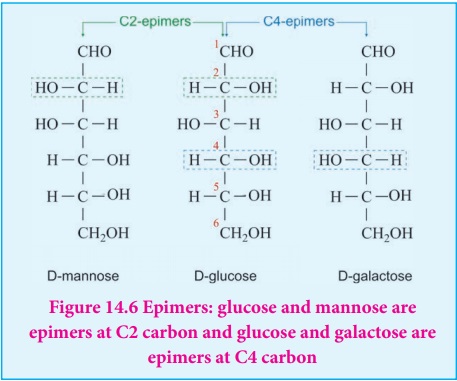