Disaccharides are sugars that yield two molecules of monosaccharides on hydrolysis. 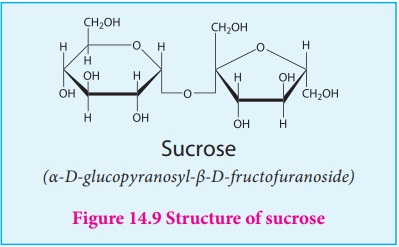 Sucrose: Sucrose, commonly known as table sugar is the most abundant disaccharide. It is obtained mainly from the juice of sugar cane and sugar beets. Insects such as honey bees have the enzyme called invertases that catalyzes the hydrolysis of sucrose to a glucose and fructose mixture. Honey in fact, is primarily a mixture of glucose, fructose and sucrose.

Sucrose (+66.6°) and glucose (+52.5°) are dextrorotatory compounds while fructose is levo rotatory (-92.4°). During hydrolysis of sucrose the optical rotation of the reaction mixture changes from dextro to levo. Hence, sucrose is also called as invert sugar.

Lactose: Lactose is a disaccharide found in milk of mammals and hence it is referred to as milk sugar. On hydrolysis, it yields galactose and glucose. Here, the β-D–galactose and β-D–glucose are linked by β-1,4 glycosidic bond as shown in the figure 14.10 . The aldehyde carbon is not involved in the glycosidic bond hence, it retains its reducing property and is called a reducing sugar. 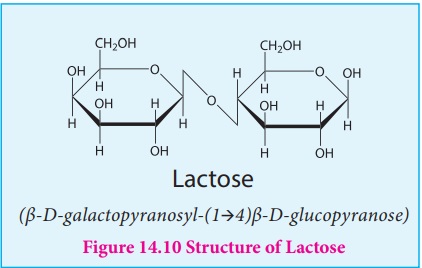 Maltose: Maltose derives its name from malt from which it is extracted. It is commonly called as malt sugar. Malt from sprouting barley is the major source of maltose. Maltose is produced during digestion of starch by the enzyme α-amylase. 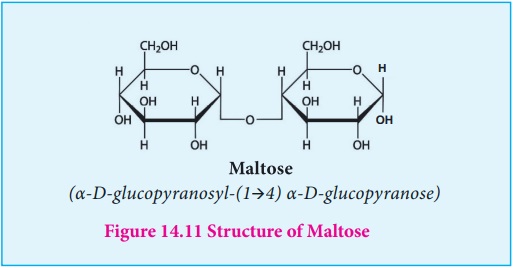 Maltose consists two molecules of α-D-glucose units linked by an a-1,4 glycosidic bond between anomeric carbon of one unit and C-4 of the other unit. Since one of the glucose has the carbonyl group intact, it also acts as a reducing sugar.