Carbohydrates are the most abundant organic compounds in every living organism.

Carbohydrates are the most abundant organic compounds in every living organism. They are also known as saccharides (derived from Greek word ‘ sakcharon’ which means sugar) as many of them are sweet. They are considered as hydrates of carbon, containing hydrogen and oxygen in the same ratio as in water. Chemically, they are defined as polyhydroxy aldehydes or ketones with a general formula Cn(H2O)n. Some common examples are glucose (monosaccharide), sucrose (disaccharide) and starch (polysaccharide) 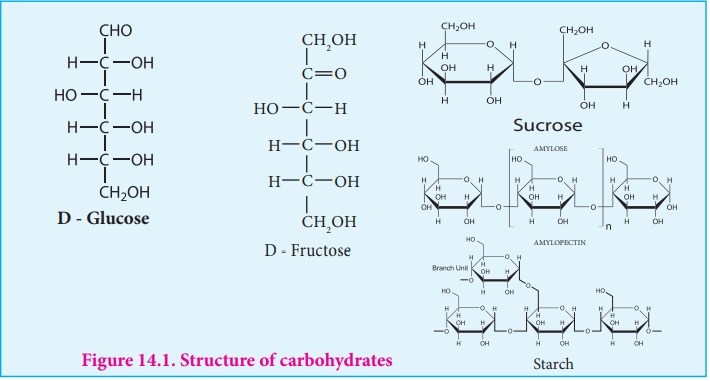 Carbohydrates are synthesised by green leaves during photo synthesis, a complex process in which sun light provides the energy to convert carbon dioxide and water into glucose and oxygen. Glucose is then converted into other carbohydrates and is consumed by animals.

Almost all carbohydrates are optically active as they have one or more chiral carbons. The number of optical isomers depends on the number of chiral carbons (2n isomers, where n is the total number of chiral carbons). We have already learnt in XI standard to represent an organic compound using Fischer projection formula. Fischer has devised a projection formula to relate the structure of a carbohydrate to one of the two enantiomeric forms of glyceraldehyde (Figure 14.2). Based on these structures, carbohydrates are named as D or L.The carbohydrates are usually named with two prefixes namely D or L and followed by sign either (+) or (-). Carbohydrates are assigned the notation (D/L) by comparing the configuration of the carbon that is attached to -CH2OH group with that of glyceraldehyde.For example D-glucose is so named because the H and OH on C5 carbon are in the same configuration as the H and OH on C2 carbon in D-Glyceraldehyde. 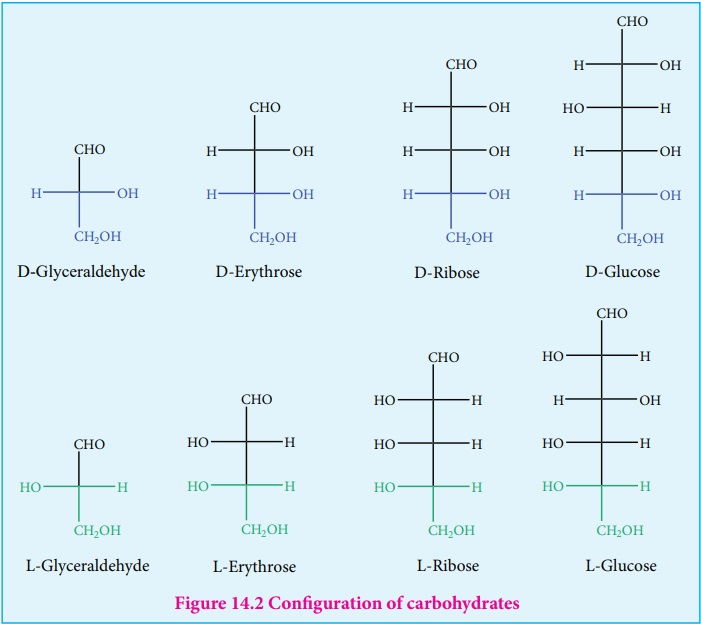 Carbohydrates can be classified into three major groups based on their product of hydrolysis, namely monosaccharides, oligosaccharides and polysaccharides.

Monosaccharides:Monosaccharides are carbohydrates that cannot be hydrolysed further and are also called simple sugars. Monosaccharides have general formula C n(H2O)n. While there are many monosaccharides known only about 20 of them occur in nature. Some common examples are glucose, fructose, ribose, erythrose

Monosaccharides are further classified based on the functional group present (aldoses or ketoses) and the number of carbon present in the chain (trioses, tetroses, pentoses, hexoses etc...). If the carbonyl group is an aldehyde, the sugar is an aldose. If the carbonyl group is a ketone, the sugar is a ketose. The most common monosaccharides have three to eight carbon atoms.