If a person is born with a hereditary disease, can a corrective therapy be given for such disease? Yes

If a person is born with a hereditary disease, can a corrective therapy be given for such disease? Yes, this can be done by a process known as gene therapy. This process involves the transfer of a normal gene into a person’s cells that carries one or more mutant alleles. Expression of normal gene in the person results in a functional gene product whose action produces a normal phenotype. Delivery of the normal gene is accomplished by using a vector. The main thrust of gene therapy has been directed at correcting single gene mutations as in cystic fibrosis and haemophilia. At present most genetic diseases have no effective treatment and so gene therapy could offer hope for many people. There are two strategies involved in gene therapy namely; Gene augmentation therapy which involves insertion of DNA into the genome to replace the missing gene product and Gene inhibition therapy which involves insertion of the anti sense gene which inhibits the expression of the dominant gene (Fig. 10.4). 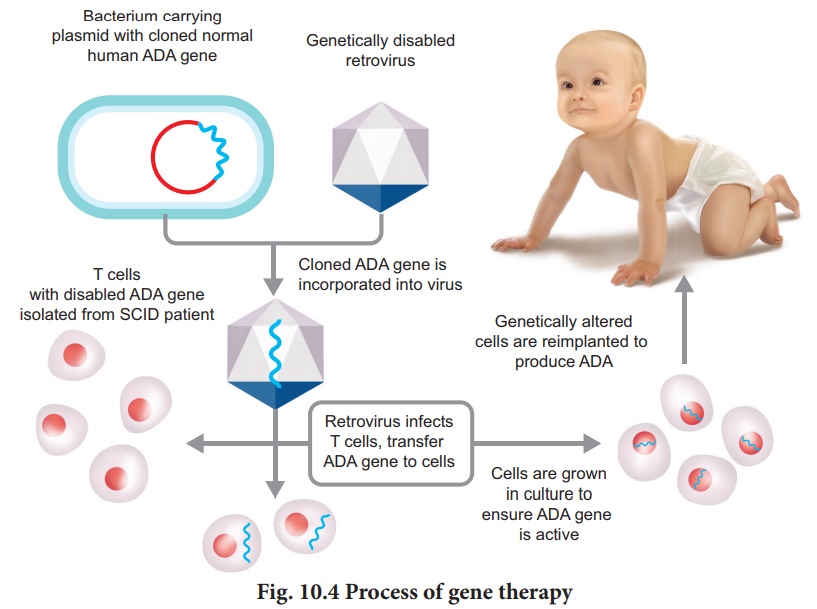 Gene therapy involves isolation of a specific gene and making its copies and inserting them into target cells to make the desired proteins. It is absolutely essential for gene therapists to ensure that the gene is harmless to the patient and it is appropriately expressed and that the body’s immune system does not react to the foreign proteins produced by the new genes.

The first clinical gene therapy was given in 1990 by French Anderson to a four year old girl with adenosine deaminase (ADA) deficiency. ADA deficiency or SCID (Severe combined immunodeficiency) is an autosomal recessive metabolic disorder. It is caused by the deletion or dysfunction of the gene coding for ADA enzyme. In these patients the nonfunctioning T-Lymphocytes cannot elicit immune responses against invading pathogens. The right approach for SCID treatment would be to give the patient a functioning ADA which breaks down toxic biological products.

In some children ADA deficiency could be cured by bone marrow transplantation, where defective immune cells could be replaced with healthy immune cells from a donor. In some patients it can be treated by enzyme replacement therapy, in which functional ADA is injected into the patient.

During gene therapy the lymphocytes from the blood of the patient are removed and grown in a nutrient culture medium. A healthy and functional human gene, ADA cDNA encoding this enzyme is introduced into the lymphocytes using a retrovirus. The genetically engineered lymphocytes are subsequently returned to the patient. Since these cells are not immortal, the patient requires periodic infusion of such genetically engineered lymphocytes. The disease could be cured permanently if the gene for ADA isolated from bone marrow cells are introduced into the cells of the early embryonic stages.